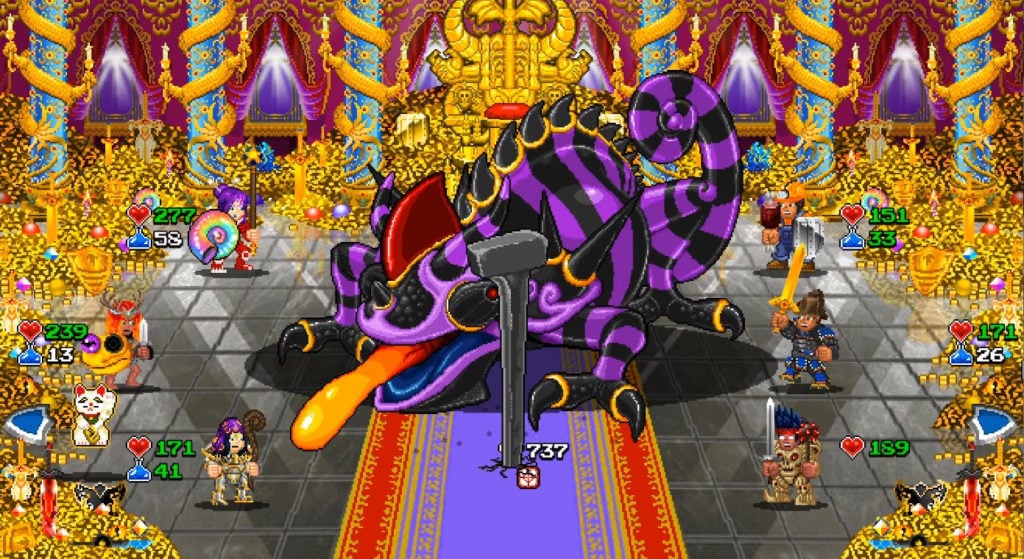 Role-playing has really come into its own this year. After all, who wouldn’t want to assume to role of a warrior outlaw in the midst of a holy war, the last remaining Jedi being hunted by evil Sith jerks who want to kill you, or a fantasy tavern keeper? Anything beats being a human in 2020.

This list offers a pretty good portrait of what the RPG genre had to offer this year, including plenty of humor, a huge amount of ambition, heaps of innovation, and a generous dollop of good-old fashioned fantasy RPG action.

Genshin Impact spent all year edging towards, looking like a surprisingly robust Breath of the Wild clone made for mobile devices. It turned out to be that and so much more, with a party system, gacha summons, and frequent content drops making it bigger and busier all the time. Already into version 1.2, Gension Impact is a true mobile gaming phenomenon, and easily among the best games of the year.

This polished RPG from developer Pokelabo originally came out in Japan all the way back in 2017, published by Square Enix. That means it arrived on global shores this year in a highly polished and established form. Directed by NieR series creator Yoko Taro, it’s a dark fantasy RPG featuring characters from fairytales who are trying to resurrect their authors. It looks great, and it plays as well as you’d expect a game of this vintage to play.

9th Dawn III is a refreshing reminder that games don’t need to like a million dollars to blow their competition away. This expansive RPG from developer Valorware is gloomy, even ugly from certain angles, but gorgeously animated and absolutely jam-packed with character. It’s in the gameplay department that it really excels, however, with an epic campaign that will take you an age to finish, filled with a staggering number of monsters, items, dungeons, and more.

Armor Game’s colorful sequel is the perfect example of an RPG that doesn’t take itself too seriously, while still managing to be every bit as compelling and addictive as its rivals. Soda Dungeon II casts you as a tavern keeper whose life revolves around sending soda-addicted adventurers to attack the Dark Lord’s castle and bring back loot with which to upgrade your tavern and town, thereby attracting a better class of soda addicts, who in turn bring back even more loot.

Guardian Tales may be a gacha game, but in all the important respects it’s a true blast from the past – an adorable, epic action-RPG straight from the 8-bit era. Full of cutesy, big-eyed heroes and fantasy tropes, it sees you romping around hacking, slashing, puzzle-solving, dungeon-crawling, and more. Plus, there’s a city-building side to the game once you’ve completed the first world, giving the game a whole new gameplay dimension to get lost in.

A bonafide classic of the open-world 3D RPG genre, Star Wars: KOTOR II is the 2004 sequel to the equally popular Star Wars: KOTOR – which stands for Knights of the Old Republic. The action takes place thousands of years before the events of the Star Wars movies (so, a very, very, VERY long time ago – but equally far away), and sees you exploring the galaxy as a beleaguered Jedi, fighting back against the rampant, and fundamentally horrible, Sith Lords.

Reviews are mixed for this one, and no doubt many of you have just spat out your coffee at its inclusion on this list. But, for all its flaws, Tom Clancy’s Elite Squad is an interesting and slickly executed RPG, giving you dozens of familiar characters to play in a variety of nicely rendered settings. It mixes things up just enough to make the automated battles interesting, with skills that can change the course of a confrontation if you use them well. If gacha RPGs tend to leave you cold, it’s worth giving this one a go.

Here’s another potential coffee-spitter. It may sound like a UK road or paper size, but A3: Still Alive is one of the prettiest and most accessible MMORPGs of the year. While the storytelling and, yes, a lot of the gameplay leaves much to be desired, A3: Still Alive is a slick, undemanding RPG with striking graphics and a battle royale mode to mix things up. It’s well supported, too, with new content and tweaks appearing regularly.

Thatgamecompany has always existed in its own niche in the gaming world, with games that eschew violence, conflict, and jeopardy in favor of encouraging players to feel things they don’t tend to feel with a controller in their hands. Sky: Children of the Light continues this traditions, allowing players to join up and explore a dreamlike gameworld together, saving spirits, discovering secrets, and soaking up the glorious vibes.

Minimal Dungeon really lives up to its name, boiling the dungeon-crawler genre right down to its very essence, and perfecting the formula in the process. There are no flashy visuals here, and nor are there pages and pages of lore. Instead, you’re greeting with simple grid-based dungeons filled with quests, monsters, loot, NPCs, and all that stuff, but all of it represented in raw text and numbers.

The latest entry in Bandai Namco’s popular Tales series, Tales of Crestoria is a comfortingly conventional anime RPG. It sees you playing a righteous “Transgressor” Kanata and his group of outlaw allies, exploring a vast fantasy world full of people who want you dead for the simple crime of being awesome. The action is turn-based, and characters from previous Tales show up from time to time. You can’t really go wrong with this one.

And rounding off this list is yet another anime turn-based RPG, this time from Netmarble. 7 Deadly Sins: Grand Cross is a visually stunning game based on the popular anime story. It boasts a moderately innovative “skill synthesis” system that allows you to upgrade skills of the same type when you put them next to each other. You can also combine cards to trigger an “ultimate move”, and there’s an AR feature too. Not bad for zero dollars.