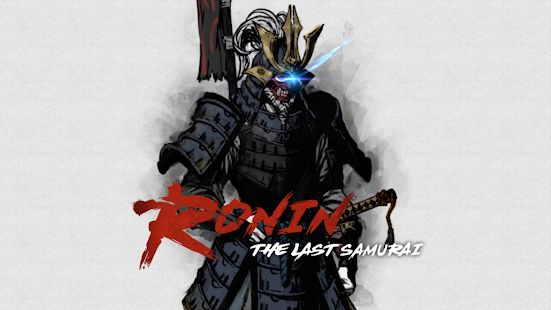 Ronin: The Last Samurai is a fighting game – a precise, methodical one that emphasizes timing and tactics over button-mashing.

But it’s also a roguelike RPG. Like last year’s awesome Hades, it sees you entering the same battlefield over and over again, gaining incremental advantages with each iteration to carry into the next.

And it’s a free-to-play game, with a progression system built on the same free-to-play mechanics as just about every RPG you’ve played on mobile in the last ten years.

For the most part, this combination of ingredients works well, though a few niggles prevent developer Dreamotion’s novel idea from truly taking off.

The aesthetic isn’t carried all the way through the game, and the menus look pretty basic, but it’s a nice effect all the same.

Your range of movement is limited, forcing you to do a few things right rather than master a huge array of moves. You can move (slowly) and block with a controller on the left, and attack with a button on the right. There’s a skill button, too, but you’ll be waiting a while to use that.

Combat involves blocking, parrying, and attacking, and it relies on you knowing which approach to use with which enemy.

It’s impossible to parry powerful attacks, for example, so you have to use pre-emptive counter flash attacks while stronger opponents prepare to unleash their haymakers. With weaker enemies, you can just block or parry their attacks. Some enemies have guns, so you need to take them out first. Every opponent type has a specific attack pattern.

As you get further into the campaign you encounter new enemies and new attack patterns, as well as bosses and sub-bosses, so you need to stay on your toes and adapt your approach for each wave.

Skill will only get you so far, of course. The real path to success lies in obtaining new weapons and armor between games, and upgrading the stuff you’ve got using various materials obtained as rewards. It also relies on spending the rewards you rack up on training to increase your stats and buy yourself perks.

During each round you’ll also receive skills as you go along, with a choice of two or three after every wave. The selections you make subtly steer your progress, allowing you to double down on a particular trait or ability, or aim for a balanced approach.

The Free-to-Play Mechanic is Reasonably Fair

Being a free-to-play game, Ronin: The Last Samurai has a moderately complicated economy of rewards, currencies, upgrades, and attributes. If you’re in it for the fighting, you may well be dismayed to discover that “fusion” and “awakening” are things you’ll eventually have to consider.

You may also be dismayed by the slow pace of your progress. Unlike Hades, where you’ve already paid for the game and the progression system is entirely geared towards giving you a good time, Ronin: The Last Samurai wants you to shell out for backpacks and gems to spend on opening chests. That can make it feel like a slog, particularly as the waves are the same every time.

Ronin: The Last Samurai’s free-to-play mechanic isn’t especially harsh, however.  And while the game doesn’t have the randomly generated, infinitely replayable levels of Hades, it’s still immensely satisfying to head back into battle time and time again with ever more powerful armor and weapons, swatting aside opponents who once stopped you in your tracks.

It would be nice, if fact, if it were possible to wield this glorious power against other players in PvP, but for the time being it’s strictly a single-player (yet, strangely, online) experience.

If nothing else, Ronin: The Last Samurai is a unique combination of ingredients, all wrapped up in a gorgeous hand-drawn art-style. As long as you’re prepared to make slow progress, and see the same enemies in the same order over and over again, you’ve got hours of compelling samurai-themed action ahead of you.

You can download Ronin: The Last Samurai for free on the Google Play Store.