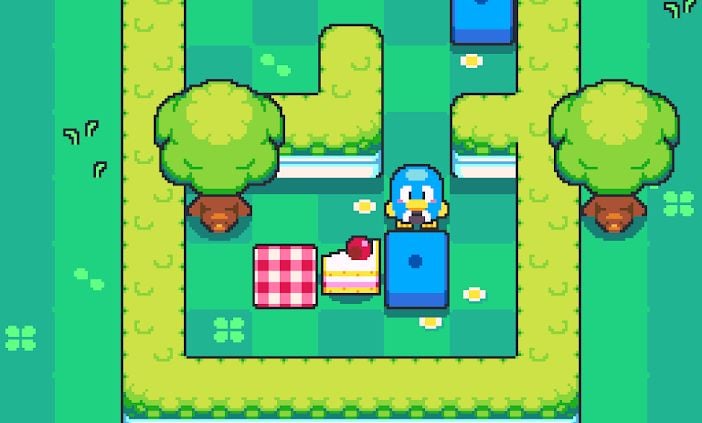 Let’s just get this out of the way: Block-sliding puzzlers are boring. Pushing stuff around to make space isn’t fun in real life, and it’s not fun in the digital realm either.

But if anyone can make an entertaining Sokoban puzzler, it’s Neutronized. This indie studio has made a name for itself with a series of bright, colorful, immaculately constructed pixel-art casual games on mobile, and it’s just about succeeded in making Sokoban fun.

The premise is simple. You’re a penguin, and you’re at a picnic. Unfortunately, the picnic can’t begin until the food is on the red and white check picnic blanket, so you need to find a way of shoving it on.

This entails not only moving your lunch but also shoving aside any obstacles that happen to be in the way. The difficulty is that you only have so much space to work with, meaning you can quickly find yourself snookered if you push an obstacle or a food item in the wrong direction. You know the drill.

Two things make Picnic Penguin a standout example of the genre. First, the gameplay. Neutronized quickly introduces new types of obstacles with their own rules. Double blocks can only be moved when there isn’t a single block in the way.

Some blocks only move horizontally or vertically. Some disappear when you maneuver three of them together, while teleporters zap you from one part of a stage to another. Many stages have outer areas patrolled by baddies, too, introducing a note of arcadey action.

That said, Picnic Penguin is certainly not an arcade game, and its puzzles are sometimes fiendish, sometimes obvious, but always well constructed.

You can usually solve stages in multiple different ways, but Picnic Penguin uses the carrot rather than the stick, encouraging you to better your previous attempts but never demanding that you finish a stage within a certain number of moves.

Movement is pleasingly non-binary, too. While most block-sliding puzzlers confine you to horizontal and vertical axes, Picnic Penguin lets you wander around wherever you like, which is another arcadey touch (if a superficial one).

The other area where Picnic Penguin excels is its presentation. The whole game has a distinctive pixel-art aesthetic that’s both charmingly retro and utterly contemporary.

The graphics are spare but stylish, and the various picnic foods you’ll find yourself shunting around – the donuts, hotdogs, ice creams sundaes, burgers, wobbly puddings, and so on – all look cute and appetizing.

Unfortunately, Picnic Penguin is on the greedy side – just like the penguin who stars in it. While the game is free to download, the frequency and duration of the ads makes it fairly difficult to enjoy. You can kill the ads with a $3.99 update.

Then there are the coins. You collect these during gameplay and spend them on a ball machine full of random prizes – but we found that they cropped up pretty infrequently, meaning that if you want to use that machine more than once a year you’ll need to buy coin packs.

There are unlockable skins, too, as well as leaderboards, achievements, and all the doodads and features you’d expect in a casual puzzler like this.

If you enjoy Sokoban games, or even if you don’t but you have an open mind, Picnic Penguin is well worth checking out. It’s a very solid, likeable example of the genre, as long as you don’t mind putting up with either the intrusive ads or the relatively high cost.