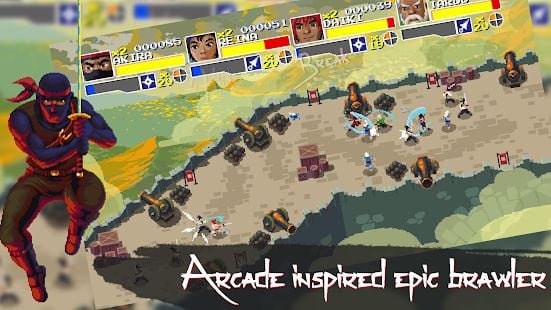 Clan N, Creamative’s pixel-art beat ’em up for PC and consoles, has executed a forward roll onto mobile, where it is currently poised in tiger stance. Or something.

In case you’ve never heard of it, which is reasonably likely, Clan N is a top-down brawler that came out last year to middling reviews. It looks fantastic, though, with pixel-art visuals that are reminiscent of the Master System era.

Plot-wise, Clan N sees you playing as a samurai warrior and bringing peace to your land via the time-honored diplomatic tool of attacking everybody.

There’s a selection of different characters, all with their own magical abilities and fighting styles. You can play it with friends, or with bots, and the game is made up of seven distinct levels.

It supports physical controllers, too, though there’s a customisable touchscreen interface for standard play.

Clan N is free to download, and it’s well worth checking out at that price, for the visuals alone. User feedback so far is relatively favorable.

You can grab Clan N on the Google Play Store right now.