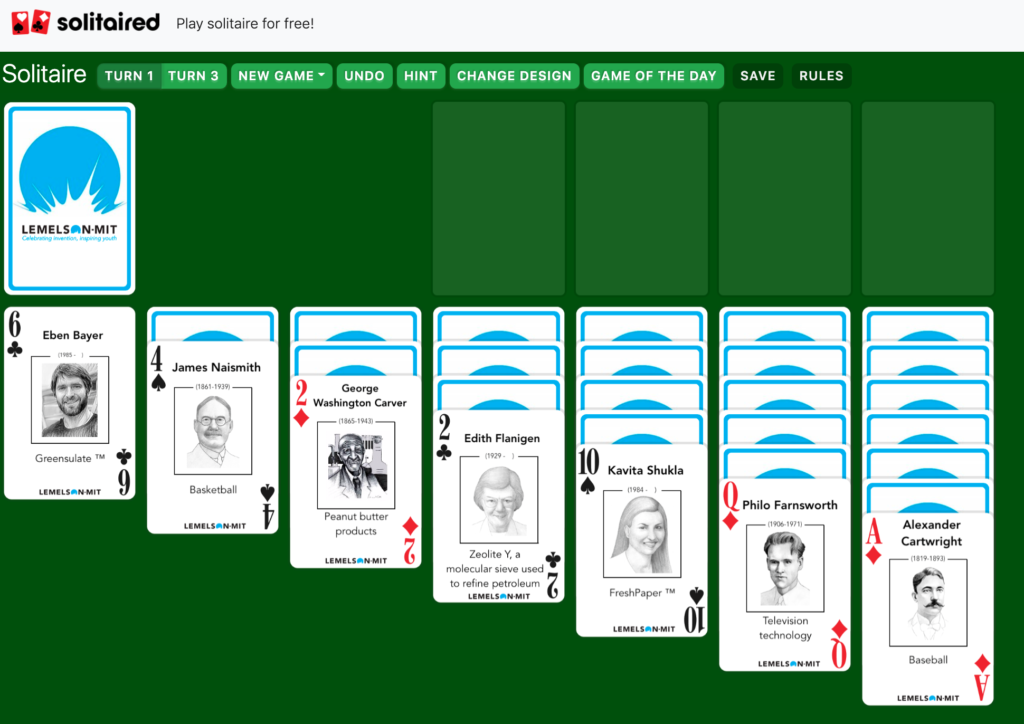 How many variations of Solitaire are there? Four? Five? There’s Klondike, Freecell, Spider, Pyramid, Golf… and that’s about it, right?

Wrong! Solitaired, a new Solitaire game from developers Darshan Somashekar and Neal Taparia, boasts more than 500 variants – enough Solitaire to keep you busy for years. And that’s not even the game’s main selling point.

Instead, the main selling point of Solitaired is its unique educational twist. Spotting a real estate opportunity on the back of every playing card, Somashekar and Taparia came up with the idea of turning Solitaire into a learning opportunity as well as a beloved timesink.

Solitaired teams up with various institutions to bring informative and fascinating titbits into your casual gameplay sessions.

For instance, a partnership with MIT’s Lemelson program saw Solitaired playing host to 52 cards featuring notable inventors, while a separate collaboration with Encyclopedia Britannica brought 52 of history’s greatest suffragists into the mix, to celebrate the centenary of women gaining the right to vote.

Another collaboration saw various pilots and astronauts appearing on playing cards to commemorate the return of US astronauts to space, while the most recent pack featured 52 leaders of the civil rights movement.

All these custom decks can be played in their Klondike, Freecell and Spider games.

As you can imagine, the potential for Solitaired to showcase important people, ideas, and events is endless.

And it doesn’t limit itself to educational designs. Solitaired features some of the best known and most popular playing card designs on the market, including Parrot and the classic Jones Playing Card decks.

Plus, it’s got those 500+ Solitaire variants to get stuck into, all accompanied by copious stats, records to beat, Games of the Day, and more.

There are countless Solitaire apps on the various app stores. Solitaired is the only one you’ll ever need, with every conceivable variation on the format and an endless supply of edifying trivia.

To get started, download Solitaired for free right now on Google Play Store, Amazon, or the Microsoft Store.