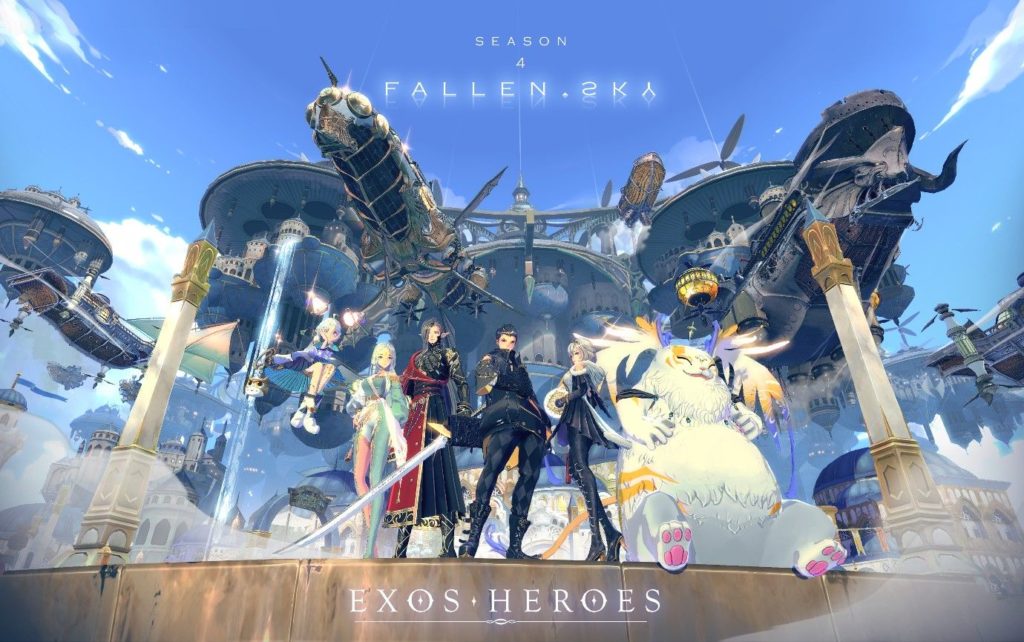 For the uninitiated, Exos Heroes is a graphically stunning RPG driven by an enthralling story about a swashbuckling dude called Zeon. It sees you exploring the Exos continent in an airship while trying to help Zeon find the emperor’s missing sword.

The new season, called Fallen Sky, brings Zeon and Bitru together again thanks to a trio of helpful and mysterious characters who have been banished from their home city of Pentaus, in the Phedas region.

Naturally, you owe the friendly trio a favor, so season 4 sees you trying to help them ascend through the black clouds and reach their home.

That means Phedas is now available as an in-game region to explore. It’s separate from the main Exos continent, in the North-East sky, so to reach it you’ll need your trusty airship, and once you’re there you’ll find a bunch of new story content.

You’ll also meet Melissa, Luna, and Garlond. These new Heroes all belong to the mysterious Shadow Bane group, and their leader is Melissa.

Under Melissa’s leadership, Shadow Bane steals the lives of others to maintain the balance of power on the continent. She’s abetted in this questionable activity by Garlond, a highly skilled former G1 Class Agent of Shadow Bane.

Luna, meanwhile, is her own person. While she’s technically a member of Shadow Bane, she plays by her own rules.

Along with these new Heroes comes a whole new Hero Class. Mythic Heroes are specialist characters with an emphasis on reversal powers such as Joker Cards rather than raw strength. You can only use one Mythic Hero per team.

That won’t be difficult in the short term, however, as there’s only one to choose from. Frozen Queen Misty is the game’s first Mythic Hero, and she’s got a terrific pedigree. Misty is one of the original seven knights who helped the Dragon Emperor, and she once led the entire Baikal Empire.

Season 4 also welcomes a number of tweaks and improvements to its existing systems, including an upgrade for Infinity Core. This PvE feature of Exos Heroes lets you compete in weekly PvE dungeons, with tougher dungeons yielding greater scores.

At the end of every week you’ll be rewarded with Infinite Crystal, a new currency that you can spend at Heowon’s Old Store on a wide variety of products, including a new Red Fatecore.

There are tons of other tweaks, too, including changes to the signature force system, rank 2 equipment, and much more.

Exos Heroes is celebrating this momentous new season with a host of events, all running concurrently – and some of them have already begun.

If you log in right now you start claiming your 11 free recruitments a day, up to a total of 220. A range of “Season 4 Eve” events, meanwhile, allow you to earn Xes, Nation Recruit Tickets, Gold, Dye Coupons, and Special Fated Hero Selection Tickets just for showing up.

There’s also a Bingo Event, running until July the 14th. This one sees you completing missions to fill out lines on your bingo board, with a Fatecore Recruit Ticket going to anybody who manages to finish the challenge.

So if you’ve been on the fence about Exos Heroes, this would be a good time to try it out. Head to the Google Play Store and the App Store to download it for free.