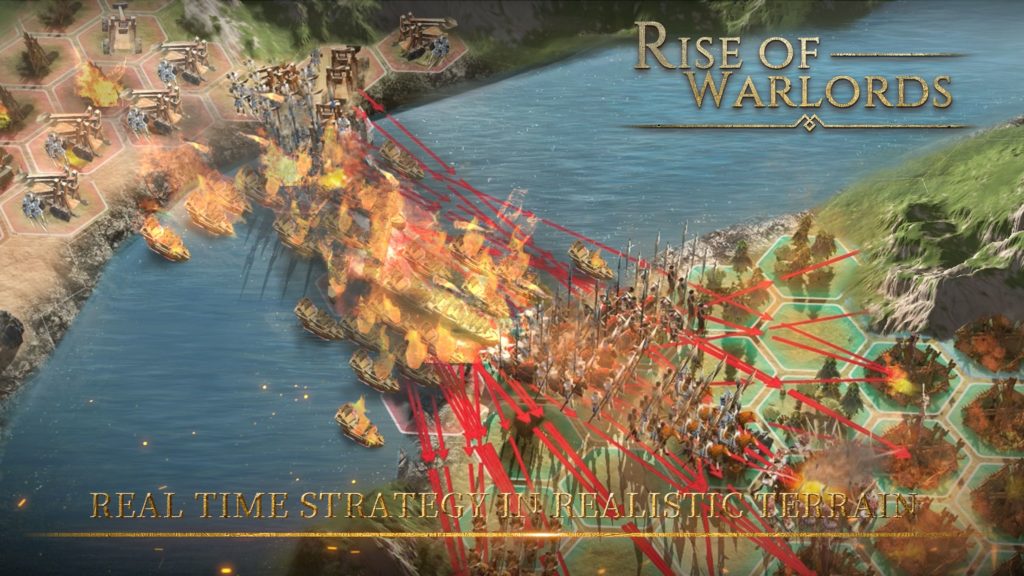 Like most cliches, it’s only half true. While there’s no question that casual games are more at home on mobile than anywhere else, there are still plenty of gamers keen to play hardcore games on their smartphones.

Rise of Warlords, from developer Happy Cat Gaming, is aimed squarely at both camps, like two flaming arrows nocked to the same bowstring.

In terms of its gameplay setup, it’s a familiar story well told. The campaign sees you taking on the role of the chosen one, an aspiring ruler of a world riven by endless war between the six major civilisations.

Do you seek to win the war and take over, or set off for a new continent where you can start afresh? You decide.

Either way, you’re going to have to kill a lot of jerks. Each kingdom in Rise of Warlords comes with its own unique terrain and characteristics, meaning you’ll need to develop your military strategy around the landscape you inhabit and the fortifications you create.

It also affects the heroes you’ll recruit and put in charge of your troops on the battlefield and the governance of your city, since the heroes you’ve got in your stable and the stuff you’ve done in the game determine the skills you have at your disposal.

Like any self-respecting mobile game, Rise of Warlords is super-accessible and eminently playable on the go. If you like, you can set yourself up with a few taps, pausing only to admire the game’s stunning 3D visuals, and then get on with your day.

If, on the other hand, you’re in the market for a deep strategy experience with countless factors to weigh and decisions to make, Rise of Warlords has your back.

Its fully 3D world is packed with geographical features such as ridges, rivers, and valleys, as well as cities with fortifications, towers, and ports, all of which have a bearing on your combat tactics. Blocking a port will disrupt your enemy’s supply lines, for instance.

To stay on top you’ll need to take maximum advantage of your surroundings, using the fact that rivers can’t be crossed and ridges conceal ambushing troops, just like a real combat commander.

Plus, your commands are executed in real-time, meaning Rise of Warlords is an organic, constantly changing battlefield. You can set your troops up for ambushes, execute flanking maneuvers, and withdraw them at any time if the going gets too tough.

The alliance system allows for different playing styles, too. Once you join an alliance you can pretty much sit back and reap the benefits, chipping in loot from time to time and calling on your fellow alliance members for favors when you need them.

Or, you can go all in and be an alliance kingpin, creating posts to manage hundreds of players, leaving objective markers on the map for other alliance members to follow, and arranging your comrades into squads based on their skills and abilities.

Plus, once you’re in an alliance you can capture the tallest building in any city in order to secure a tactical advantage over your many, many enemies.

Whatever approach you take, being in an alliance is crucial. The only way to thrive in Rise of Warlords is to play strategically and to cooperate. The game boasts plenty of great things to spend your money on, but spending money won’t get you to the top.

Rise of Warlords is free to download, so head to the Google Play Store (or the App Store) to grab it right now – just click here.