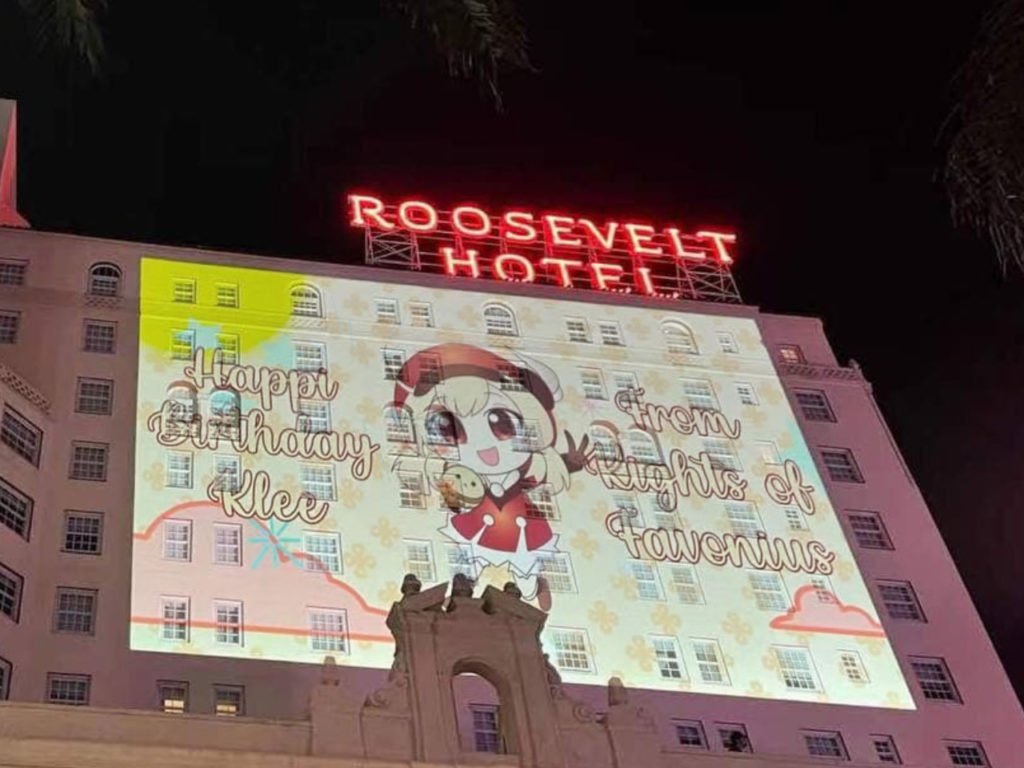 A massive birthday party was held for one of Genshin Impact’s most famous characters on Monday night. Klee, the plucky Pyro hero, celebrated her first birthday with a 3D mapping projection all along the side of the Roosevelt Hotel. You’ve got to give it to her, she knows how to throw a party.

We all love showing off on our birthday – it’s kind of the point of throwing a party, right? And if you can do it on the side of one of the most iconic hotels in Los Angeles, well, you’d be foolish not to, really.

The 3D projection, which was on the building all night, showed Klee celebrating in style. She got cake, she got kiddy and she made some history too. This was the first time ever that the Roosevelt Hotel had allowed a mapping projection on its east wall. A first birthday and a birthday first.

Klee is one of the best loved characters in Genshin Impact, and the Knights of Flavonius – fans and players of Genshin Impact – turned out to celebrate her first anniversary with her. And they were treated to a super impressive show that they’re likely to remember for a good long while.

If you fancy checking out some footage from Klee’s first birthday event, you can find the tweet below and watch a cool video on 9gag that captures the atmosphere of the awesome event. It’s certainly given us some ideas of how we’re going to party when our birthdays roll around.  Fans across Seoul, Singapore, Toronto Niagara Falls, and London Eye also celebrated the occasion with their own events.

You can find Genshin Impact on Google Play (and the App Store).