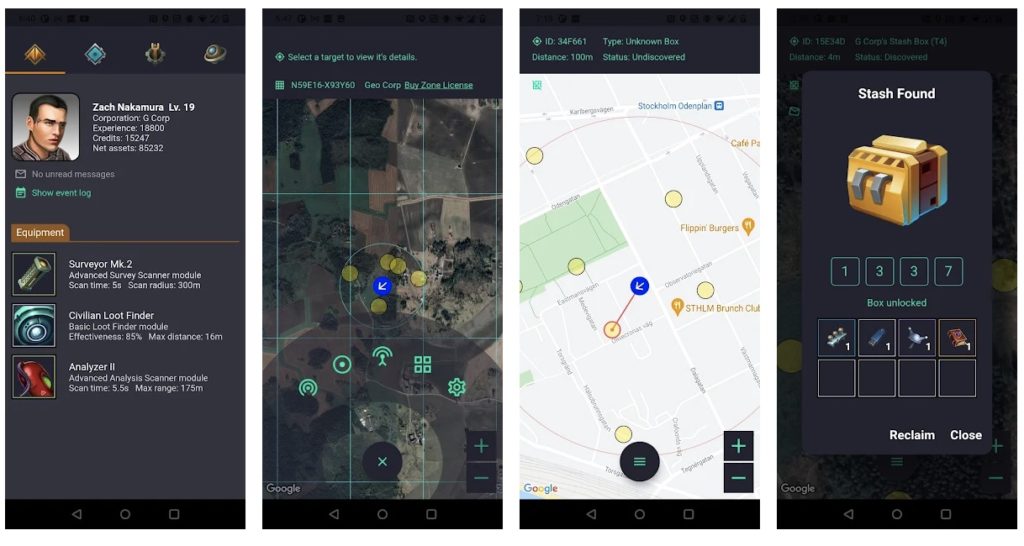 Pokemon GO is not a game about Pokemon. It may have a lot of Pokemon in it, and the word “Pokemon” in its title, but what Niantic’s location-based AR phenomenon is really about is getting up and going for a lovely walk.

The same is true of Geo Scavengers, from Aperico Software. This story-driven AR RPG sees you developing your character and competing with other players under the guidance of the shadowy Geo Corp., who communicate with you via in-game story emails.

But really it’s about getting some wholesome exercise as you track down and claim an endless supply of virtual loot caches in your neighborhood – or wherever you happen to be.

The starting premise is that there’s a hidden parallel universe alongside the normal physical universe – and it’s full of loot, located in caches that appear at random. The only way to discover these caches is by downloading Geo Scavengers and making use of Geo Corp.’s sophisticated tools.

These include a Survey Scanner, a Loot Finder, and an Analysis Scanner, all accessible via a handy menu that pops up when you tap the menu button on the map screen.

Your map in Geo Scavengers is always of your immediate surroundings, based on your location data and taken from Google Maps. You use your Survey Scanner to search for caches on this map. You can pinch to zoom in and out, but your Scanner has a fixed range.

What’s in the Box?

Once you’ve carried out a survey scan and exposed the caches in your area, you can tap on one and use your Analysis Scanner to tell you what kind of cache it is – but not what’s inside.

Caches are tiered, and some are locked, while others require you to solve simple, lackluster pair-matching or odd-one-out puzzles to open them. To open a locked cache you need a key, which you can either find in another box or craft for yourself.

These keys come in a variety of colors. To make a purple one, say, you need to sacrifice a blue and a red. To make a blue one, you need a blank key and a blue keycode.

There are two ways to upgrade your powers and hurry things along. You can spend the XP you earn on unlocking various skills. These increase your survey speed and range, improve the accuracy of your finder, improve your crafting proficiency, and so on, with each skill coming with five increasingly expensive levels to work your way through.

Unlocking these skills isn’t cheap. It’ll take you a few outings to reach the point where you can buy your first upgrade. Geo Scavengers is all about the long haul.

The other way to upgrade yourself is by crafting modules, such as a more advanced Surveyor, a better Scanner, a Military Loot Finder, and so on. These are composed of the anonymous springs, bolts, keys, tubes, nuts, reels of wire, and other doodads you randomly extract from caches.

Is There Anybody Out There?

You can also craft your own Secure Caches and place them in the world for other players to discover. These are locked behind codes that treasure hunters need to work out. Unfortunately, however, there’s no note-leaving functionality in the game, nor any way to communicate with other players, so treasure hunts aren’t really possible.

The other multiplayer element of Geo Scavengers is more developed, though it’s pretty well hidden. By tapping the symbol at the top-left of the map screen you can bring up a grid, indicating the game’s zones. Then you can buy a week-long license for a zone.

The benefits of licensing a zone are twofold. For the duration of the week you don’t have to pay any tax to Geo Corp., and any other players who find stuff in your zone have to pay tax to you. The busier the zone, the more cash you can earn.

These multiplayer features are intriguing, but Geo Scavengers doesn’t have anything like enough players to make them work. Given that this is a premium game, and not a particularly cheap one, we don’t see this changing soon.

Geo Scavengers is a perfectly decent excuse to go for a walk and explore the lesser-visited streets and alleyways of your neighborhood. It’s a slow burn with a subtle, text-based campaign.

But it’s graphically basic, and a bit rough around the edges in places, with the feel of a work-in-progress rather than a fully-fledged release – all of which makes its $6.49 price tag slightly perplexing.

You can download Geo Scavengers for yourself via Google Play right now.

Go Out And Explore

It's refreshing to play a mobile game with no ads or IAPs, but we’re not entirely sure Geo Scavengers is doing enough to justify its premium price tag or maximize its potential. Yet it's still undoubtedly a memorable and (largely) fun experience.