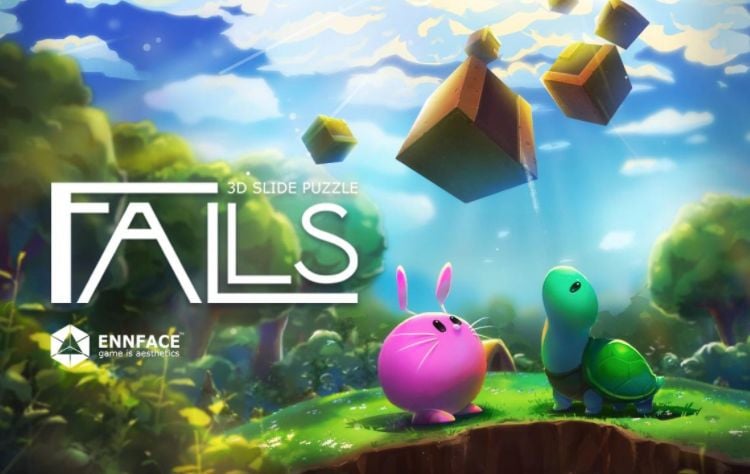 Right now, everybody in the world is obsessed with an online puzzler called Wordle. Why? Because it’s a simple yet ingenious twist on an established gaming formula.

On that basis, Falls deserves to be the next global craze. This serene, accessible, stunningly pretty puzzle game from developer Ennface takes a recognizable puzzling format – sliding tiles – and spins it into one of the most addictive and original games of the year.

In case you’ve been living deep underground or on another planet for your entire life, here’s how a sliding puzzler works. You start with a grid of tiles that can slide vertically and horizontally until they come together to create a picture.

Sounds simple, right? Well there’s a catch. The grid you’re working with only has one empty space, so you need to shuffle the tiles around in elaborate, methodical sequences in order to successfully rearrange them.

Falls takes this basic idea and fuses it with a number of others. For a start, there’s a splash of Where’s My Water?, Disney’s classic mobile puzzler, in that the aim of the game is to create a channel for water to flow down.

There’s a touch of Monument Valley, too, in the simple, stylish 3D visuals. Rather than being static grids, each stage in Falls is a pastel-hued floating island that you can spin with your finger to examine every surface.

Then there’s all the other stuff Ennface has added to augment the core sliding puzzler gameplay.

In each stage, for instance, you’ll find tiles with seedlings on them. Create a channel towards these and you can grow plants for extra points, even when doing so doesn’t necessarily help you complete the stage.

Outside the stages, meanwhile, there’s a crafting system that allows you to create items and store them in your toolbox. Later on, you can use these items to help you solve particularly tricky puzzles.

And there are plenty of them. Altogether Falls boats 250 stages across five distinctive worlds, each of which has its own unique mechanics. That’s a lot of puzzle-solving.

To get started, download Falls for free on Google Play or the App Store.