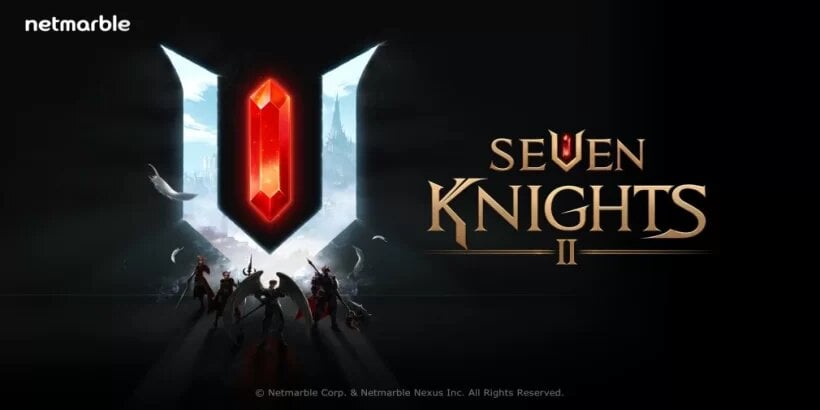 The great thing about a game like Genshin Impact coming along is that it forces everybody else to up their game.

Seven Knights, from South Korean studio Netmarble, always sat at the luxury end of the free-to-play mobile RPG market, but Seven Knights 2 comprehensively outshines it in terms of presentation and gameplay features.

Even in a genre dominated by miHoYo’s gacha masterpiece, it remains a contender.

Storywise, Seven Knights 2 takes place 20 years after the events of its predecessor. The action opens with a dramatic duel between sword-wielding heroes, and the tragic slaying of an unfortunate hovering third party.

Then we meet Lene, daughter of Eileene from the original Seven Knights and the hero of our story. Lene is accompanied by a band of mercenaries and a mysterious girl called Phiné, and their task is to find Rudy, the last surviving member of the Seven Knights.

And so you’re plunged straight into a remarkably organic single-player campaign that sees you moving from point to point encountering battles and conducting conversations with party members and NPCs.

It sees you ploughing through enemies until you hit a wall. Summoning heroes, pets, and gear, completing daily missions, hitting up the Celestial Tower, attacking dungeons, and eventually taking part in guild wars, field exploration, and an arena mode all provide you with the rubies and gold you need to upgrade your characters and push the story forward.

Heroes come in a variety of different classes, including Tanks, Support, DPS units, and so on. A balanced team is the key to victory, though it’s sometimes necessary to emphasize a particular type of combat depending on the enemy you’re facing.

You know the drill.

But a couple of things set Seven Knights 2 apart. The first, and most obvious, is the sheer level of polish in its cut-scenes and general gameplay.

This is a console-quality experience from the moment the first animation begins, not only visually but in all areas. The writing is solid, the characters are distinctive and full of personality, the voice-acting is flawless, and the whole production would be at home on the big screen.

The result is a textured adventure, consisting of tranquil spells of sunny village downtime and tense battles in hostile environments, with a gorgeous score that alternates between soothingly serene and nerve-janglingly dramatic.

Unlike many mobile RPGs, Seven Knights 2 takes place in a fully 3D world that you can navigate freely, with a variety of camera angles from over-the-shoulder to a Diablo-style bird’s eye view.

Automatic for the People

To keep things simple, Seven Knights 2 gives you a glowing line to follow to your next goal at all times.

To keep things even simpler, you can activate an Auto mode pretty much from the outset, effectively turning Seven Knights 2 into a rolling animation in which your party of characters moves automatically from fight to fight.

Seven Knights 2 is scrupulously beginner-friendly, with an unobtrusive tutorial system that lets you learn about game features as you encounter them, simple preset formations, and the option to automate pretty much everything, from equipping items to taking on bosses.

If you choose to take advantage of all this automation, however, you’ll miss out on some innovative RPG gameplay.

The usual skills and ultimates are available, but so is the option to Rally your units so that they all move as one. This comes in handy when you’re up against a boss with an area of effect attack that you need everybody to get clear of.

Conversely, turning off Rally spreads your units out, allowing you to minimize the damage from a big assault. This mechanic makes battles in Seven Knights 2 feel more interactive and meaningful than they do in most mobile RPGs.

During combat, you can see which enemy each of your units is targeting via a glowing blue arc, giving you a huge amount of control if you choose to wield it. It’s all very intuitive, which sums up our experience with the game as a whole. You can download it via Google Play (and the App Store) now.

Seven Knights 2 is aimed at both ends of the spectrum, from casual to hardcore, and it hits both targets squarely. You might quibble with its gacha pull rates, or with the unusually long time it takes to unlock all the modes and content, but this is still the most promising mobile RPG of the year so far.