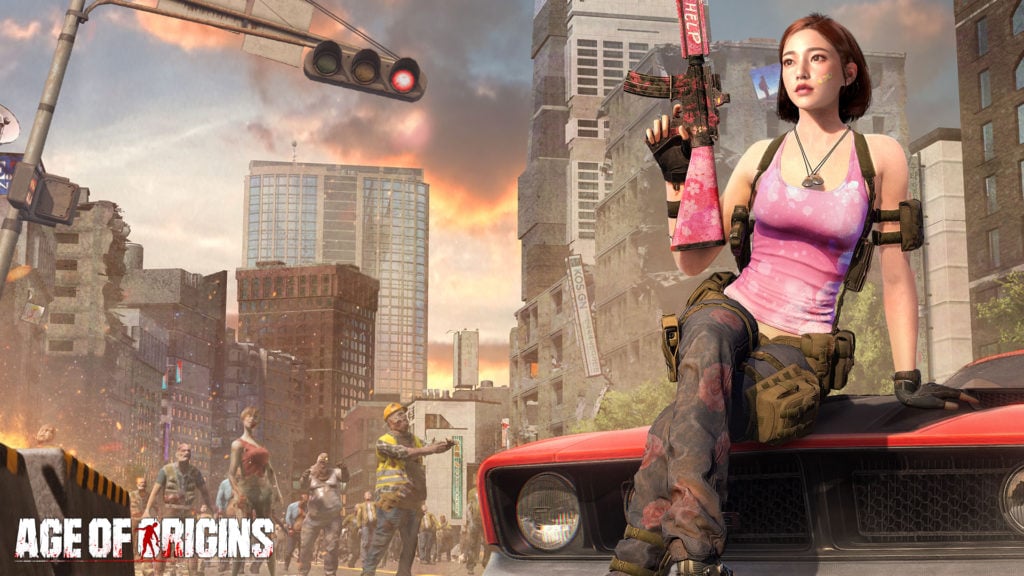 And that’s not all. There’s also a mysterious new island to explore, decorate, and make your own thanks to the first major content update of the game’s fourth year on Android and iOS.

Before we get into that, here’s a refresher on the game for those of you who are yet to sample its post-apocalyptic undead delights.

Age of Origins is a massively multiplayer strategy game set in a world brought to its knees by a biohazard-induced global zombie apocalypse.

You play as a city leader charged with keeping your settlement safe from zombies that shamble across the wasteland in hungry swarms. And that’s the easy part. Your fellow humans are out to get you too, and they’re much more devious and determined.

All the Genres, All the Terrain

Age of Origins is an ambitious, genre-straddling escapade that forces you to master city-building, survival, real-time strategy, tower defense, and more. The new cross-nation Duel of Dominance event, meanwhile, is like a team-based take on chess.

Battles in Age of Origin take place in a sprawling, topographically varied 3D landscape consisting of high ground, low ground, and everything in between. This topography varies from region to region, too, and it all affects your odds in battle.

To come out on top you’ll need to consider not only the strength of the army you’re facing but its position, too. Using the terrain to your advantage is an important principle in real warfare, and it’s just as important here.

As you fight your way through the game you’ll run into bigger and bloodier battles, forcing you into alliances with fellow players. It’s hard to trust people in an apocalypse scenario, but you’ll need to make it work if you want to survive and take control of the game’s all-important urban centers.

No Rest for the Wicked

There’s always something to keep you on your toes in Age of Origins. As well as battling the enemy you’ll need to erect fortifications, reclaim territory from the teeming undead, take in refugees, and turn your city into a habitable settlement with plentiful resources and a functioning economy.

That means building homes for your subjects to live in, hospitals to treat their wounds, and farms to grow their food. And it means training soldiers, manufacturing tanks, and churning out cyborgs armed with unimaginably deadly superguns.

There are three different troop groupings in Age of Origins, further subdivided into 12 troop types. Each one comes with its own unique strengths and skills, and you can equip them with a vast array of weapons, equipment items, and buffs.

Then there are the officers, which have four distinct areas of expertise: Director, Strategy, Warfare, and Drillmaster. These various elements add up to a mind-boggling number of strategic possibilities. You just have to hope you pick the right one.

One of the Drillmaster in the game is Cattie, and she’s central to the new Mysterious Island update.

In case you’ve forgotten, Cattie is a gifted Drillmaster who set out to explore the world with her dog Lucky following the collapse of civilization. Cattie was just too valuable a military asset to remain in the wilderness, however, and now she’s training your troops and getting them ready to fight.

In this latest phase of the Age of Origins saga, Cattie and her companion Lucky have discovered an island paradise that’s ripe for development.

You can place all manner of decorations around your island, including a Dining Car, a Helicopter, a Beachfront Mansion, a Surfer Statue, a Parasol, and much more. These items can be placed absolutely anywhere, ensuring that each player’s island is totally unique.

Decorations have practical advantages, too. As you level up your decorations you’ll earn stat bonuses to aid you on the battlefield, making them military assets as well as decorative ones.

On top of the new Mysterious Island content there are several new events to take part in for goodies and rewards. These events include Lucky Stolen Treasure, Quest Bingo, and Drinking Water War.

Plus, Zeus has prepared some gifts for the game’s cast of Commanders, making this the perfect moment to join the apocalyptic party.

And what a party. Age of Origins has attracted more than 200 million downloads so far, scoring an average user review score of well over 4 stars across Android and iOS. That makes it one of the biggest hits on mobile.

To get involved in the game’s latest phase, download Age of Origins for free on the Google Play Store or the App Store – just click here. The Mysterious Island is waiting for your visit.

***Be sure to redeem the code jvGdzN for extra help on how best to negotiate Age of Origins’s many perils too – you have until the 29th of April to use this, so hurry!***