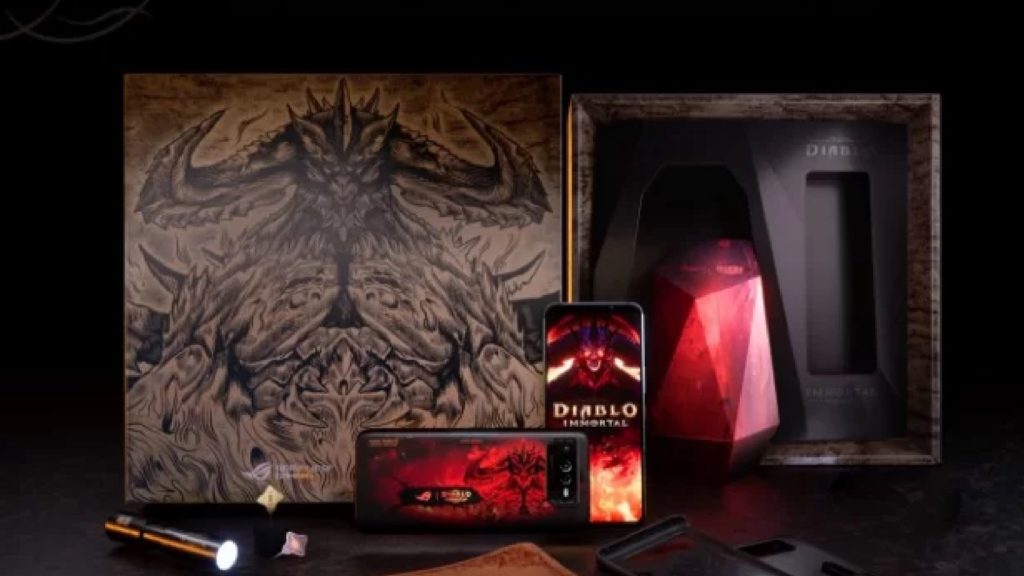 If you’re a huge fan of mobile gaming like we are, then you might be looking for a gaming phone. The ROG Phone 6 is a strong contender for best gaming phones, but could it be any cooler? Maybe, with this Diablo Immortal Edition.

While Diablo Immortal isn’t the most popular game in the series, it is a large money-maker for NetEase and Blizzard. At the very least, the game is popular enough to get its own limited edition phone release.

The ROG Phone 6 Diablo Immortal Edition is an expensive celebration for fans of the series. If you’re a Diablo fan, this is the gaming phone for you, Furthermore, it’s one of the best gaming phones on the market.

For fans of the franchise, the entire backplate of the device has been swapped with key art for the game. Even the phone’s OLED screen has been replaced with the game’s logo. Now, isn’t that great advertising?

The Limited Edition ROG Phone comes in a lavish woodcut-style box emblazoned with Diablo. That’s not the only goodies either; some gorgeous additional items are also included with the device. Check a look below.

This version of the gaming phone comes with all the same specs as the normal phone. That’s right: 16GB LPDDR5 RAM and 512GB UFS3.1 ROM; it’s a beefy phone for hardcore gaming. If you wanted to use, say, the best PS2 emulator, you’d be fully set.

In all honesty, it’s complete overkill just to play Diablo Immortal. However, if you like the Diablo franchise and need a gaming phone, this may be the device for you.

If you want the phone, you can pre-order it right here. Furthermore, you can download Diablo Immortal on the Google Play Store over yonder.