Getting started in Djinnworks’s Mech Battle 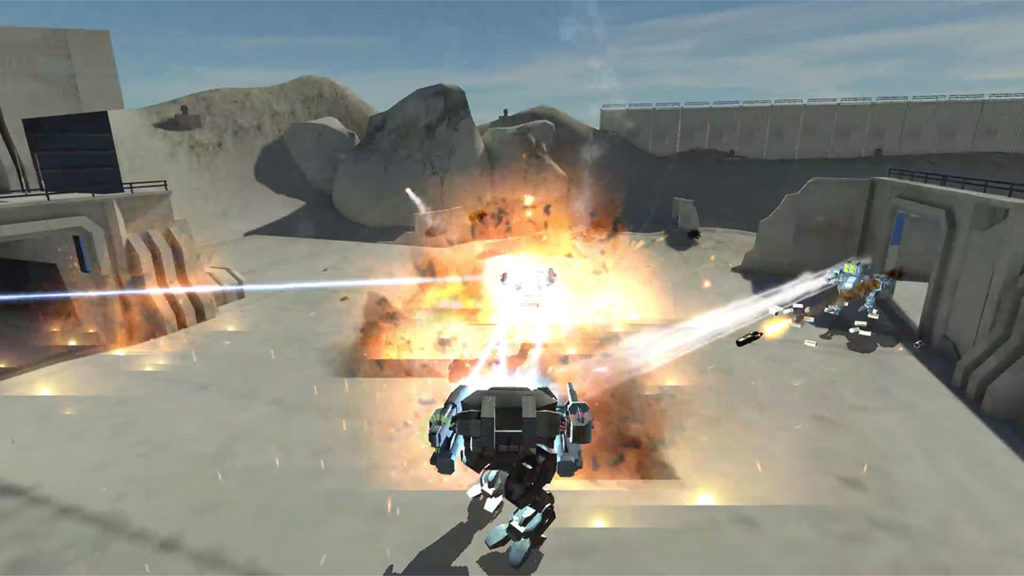 Mech Battle is a game in which you battle with mechs. You shoot them and they explode, or, alternatively, they shoot you and you explode. What could be simpler?

Honestly, not much. Mech Battle is a gloriously direct multiplayer shooter. But there’s a lot going on under the hood of your fleet of walking tanks, and a few winning tactics to learn if you want to progress in the brutal world of post-apocalyptic mech war.

How to thrive in battle 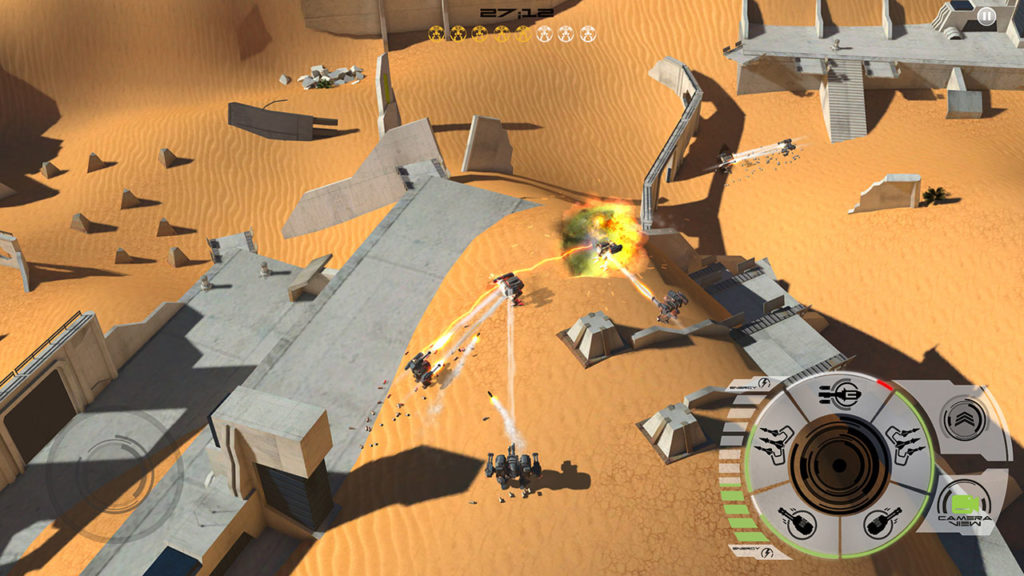 Mech Battle is set in the future, after a terrible war has laid planet earth to waste. Therefore the environments you play in are bleak and filled with ruins.

But the technology is on point. You, your team mates, and your enemies are all piloting giant walking tanks called mechs, and you can equip these with a variety of weapons and upgrades.

Weapons – or rather, things you can mount – fall into several categories.

Firstly, there’s kinetic. Your Cannon, MG (machine gun), F300 (shotgun), Decimator (don’t ask) are all kinetic weapons, which means they’re like the weapons you think of when someone says “gun”. They fire little bits of metal.

Then you’ve got your Rockets. At the most basic end there’s the Q200, which fires a single rocket, and at the other end of the spectrum there’s the Persuader, the persuasion credentials of which are based entirely on its ability to fire nine rockets at once.

Like bullets, Rockets can only travel straight. Homing Missiles, on the other hand, seek out their prey like flying ferrets. Weapons in this category include the Tomak, the TomakNGEN, and the Swarm, which sends out a cluster of rockets at once.

Last but not least are the futuristic Energy weapons, like the Plasma Gun, which fires out balls of light, and the LaserMK2, which projects a deadly laser beam.

In addition, you can mount shields to your mountpoints, giving you temporary shelter during battle. 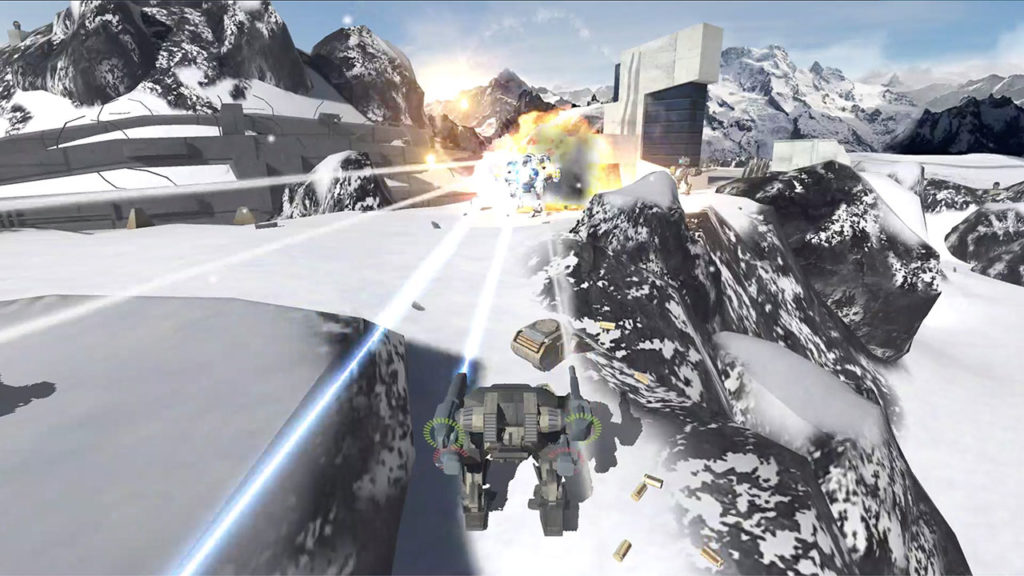 Each of these weapons and shields has its own unique stats, which you can peruse in the hangar. These stats include damage over range, damage over time, required mountpoint (mountpoints can be light, medium, or heavy), fire delay, clip size, and a variety of other metrics.

Weapons come with level requirements, so you need to reach a certain level before you get access to the more powerful ordinance.

Mechs are not known for their agility and stealth capabilities, but even so you can increase your odds of success by maneuvering your vehicle with cunning.

If you have Homing Missiles equipped, you can make use of cover, chipping away at an enemy mech’s defences from behind an obstacle as it struggles to get you into view.

And if you’re caught in the open, you can make use of classic multiplayer shooter maneuvers like circle-strafing, to make it more difficult for your opponent to hit you. It’s also important to use the right weapon for the right range. For instance, Rockets are generally not much use at too close a range, and you need a good line of sight to get the best out of them. Kinetic weapons meanwhile are effective at many ranges, but they’re less powerful than rockets.

As well as different weapons there are different mechs, some of which are small and nimble while others are large, cumbersome, but brutally effective if they manage to get a shot in.

Many of them have special skills too, whether it be a temporary speed boost or a time-limited ability to jump. Jumping is a valuable skill since your mech can’t look up.

There are 15 mechs in all, but it’ll take you a very long time to buy them all, let alone upgrade them and kit them out with the best in post-apocalyptic military hardware.

Hanging in the hangar 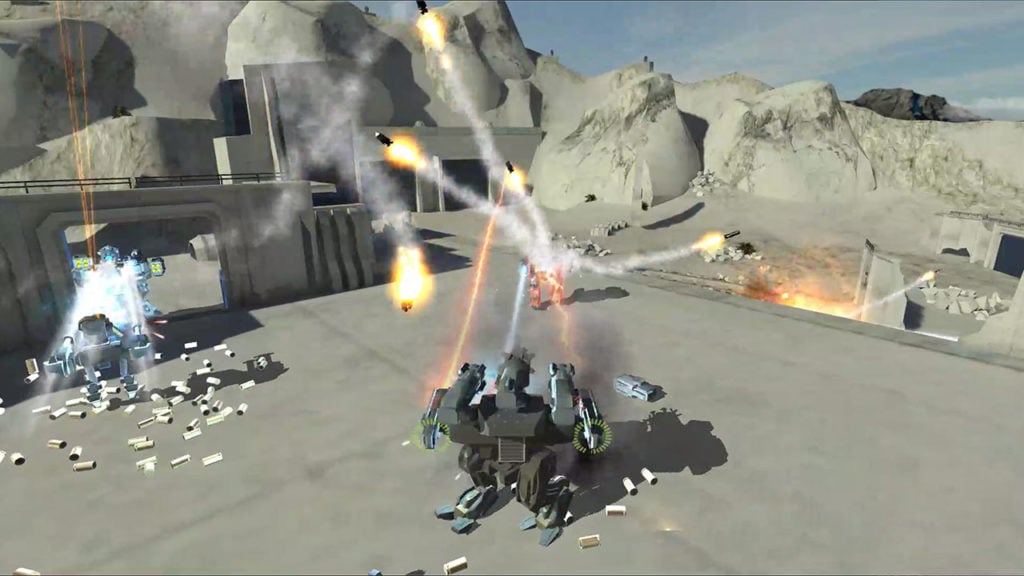 Mech Battle features three distinct currencies: Lithium, Platinum, and Energy Cells. All of these are both earned on the battlefield and won in the form of rewards.

At the end of each battle you get a little rundown of the currencies you’ve accumulated in combat. You earn Lithium, the game’s most abundant currency, by dealing damage. Every direct hit translates to cash. However, you also have to pay to repair your own mech, so there’s always a bit of Lithium going out as well as coming in. It’s not hard to stay in profit, but playing badly will slow your progress.

You also get a Lithium bonus for winning a round, while finishing a round nets you Platinum, as does being the last mech standing and destroying the greatest number of mechs.

You spend Lithium on upgrading your mechs, as well as its mountpoints, and buying new mechs and weapons. Each upgrade is on a timer, though you can speed things along by watching a video or forking out some Platinum.

Platinum is harder to come by than Lithium. Your fourth new mech slot costs 500 Platinum, and you only get a handful per round, which gives you an idea of its value. 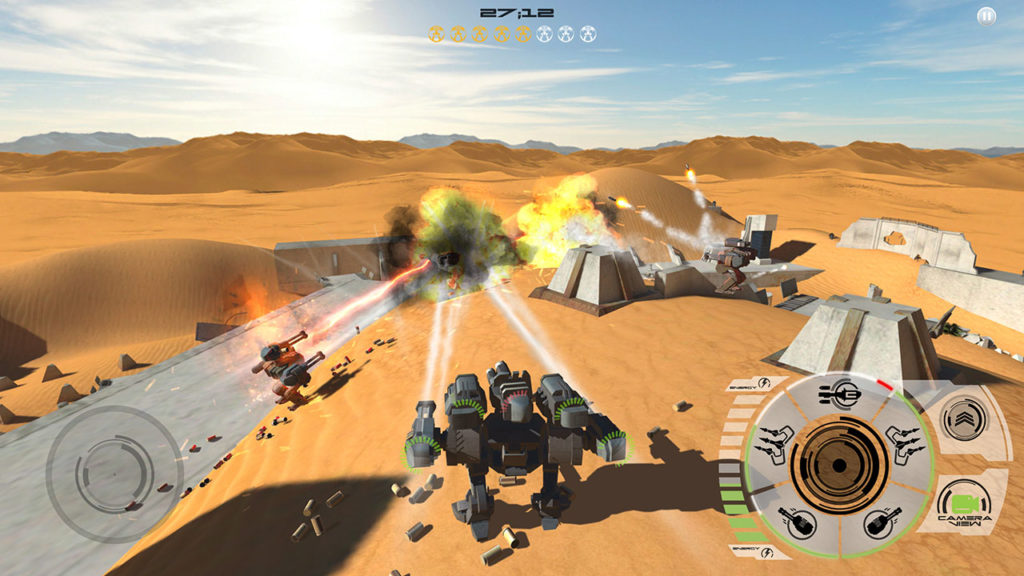 That’s why it’s absolutely essential to claim all the free Platinum, Lithium, and Energy Cell you can. And there are quite a few.

You get Battle Progress Rewards on a daily basis, giving you a tidy sum of one of the three currencies, and you get a regular Supply Drop too, containing a slightly less tidy, but still welcome, sum.

You can see all of these extra income streams on the left of the screen, with notifications letting you know when your goodies are ready to claim. And on the top-right of the hangar there’s little white circle that you can tap to claim any offers and bonuses that happen to be going.

And there’s still another way to make some extra cash. In the hangar, where you upgrade your mechs and mount-points, buy new mechs, change weapons, and so on there’s also the option to sell any weapons you don’t need.

See how you cope in battles yourself by downloading Mech Battle right now on Google Play (and the App Store!).