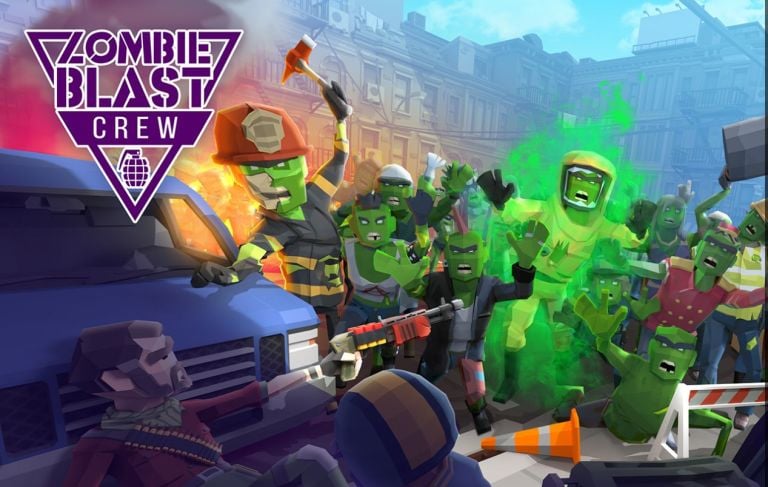 You’d think that killing zombies would be a straightforward affair – simply point your gun at them and pull the trigger. Not so. To wage a truly effective war against the walking dead in Zombie Blast Crew, you’ll need to understand the terrain.

The core gameplay loop in Zombie Blast Crew essentially involves completing missions to earn loot and XP with which to level-up your character and your equipment, in preparation for more demanding missions.

These missions vary, from rescuing hostages to salvaging supplies to simply killing as many zombies as possible, or doing so as fast as possible. As well as your primary objective you always have two further objectives, and to get three stars you need to clear them all.

On top of that there’s a shop where you can buy coins, chests, and upgrade cards, and there’s an event mode which lets you compete for prestige and grind for loot away from the main campaign.

Without further ado, let’s dig into the detail.

There are five heroes in Zombie Blast Crew, and each of them has their own weapons and stats, including health, damage, speed, and range. Here’s a brief rundown.

Micheal is the character you begin with. He’s a solid all-rounder, with pretty average ratings all round. His special ability is that his gear cools down faster when he kills enemies.

Bill unlocks at level six. He carries a shotgun, which has moderate range but is much more powerful at close quarters. Unlike Michael, he can kill zombies with a single pull of the trigger. He’s slow but tough, and killing zombies restores his health.

Karen unlocks at level 11. She carries a flamethrower, which is as badass as it sounds. Her range is quite poor, but her damage is high. She moves very quickly, but she’s easy to kill. She gets a damage bonus when her health falls below 50%.

Vanessa unlocks at level 15. Like Karen, she’s fast but flimsy. She carries a rocket launcher, which causes massive damage at a significant range, but if she gets into a tangle with a zombie she’s done for. Her health regenerates over time.

Lastly, Javier unlocks at level 25. He moves at a moderate pace, and his health is relatively poor, but his weapon is incredibly powerful with excellent range. It takes a moment to power up, though.

The different heroes and their weapons are suitable for different missions, though some feel intrinsically better than others. Karen is our favorite, with the result that we’ve concentrated on making her as powerful as possible.

Whichever hero you equip, the same tactic applies on the battlefield: backpedal, circle-strafe, and make good use of your gear.

Zombie Blast Crew features a surprisingly wide variety of zombie types, all of which behave differently. We’ll let you work out your own battlefield tactics, but here are the undead species you’ll encounter.

Plain – the commonest zombie. It just runs at you.

Runner – this red trousers-wearing zombie can run and attack simultaneously.

Toxic – a zombie that emits a toxic cloud.

Housewife – a zombie that throws knives (like a housewife?).

Anarchist – a zombie that throws bricks.

Bomber – a zombie that throws bombs.

Punk – a zombie that throws Molotovs. The zombies that lob stuff broadcast their assault with a red circle indicating the blast radius. Get clear of it.

Firefighter – a zombie that spins around with an axe.

Footballer – a zombie that charges towards you.

As well as their weapon each character can take three bits of gear into battle. There are three available at the outset, with more unlocking as you level-up.

The grenade is, well, a grenade. It deals very heavy splash damage, and has a relatively low cooldown time. Great for lobbing into crowds.

The gun turret shoots zombies automatically until they manage to destroy it. The gun turret is relatively weak. While its cooldown period is long, it’s not uncommon for the previous turret to still be in operation when you plonk down the next one, so that’s not an issue. Post one of these up when you’ve got a circle to defend.

The minefield (unlocks at level 3) is what it sounds like – a cluster of mines that explode when zombies step on them. They’re not hugely effective. Use them when defending a circle.

The airstrike (unlocks at level 8) is a very powerful bombing raid. Enormously effective but with a fairly lengthy cooldown. Indispensable. Make sure you drop them on a crowd.

The explosive decoy (unlocks at level 14) is a bobbing clown that attracts zombies before exploding. The damage and radius of the explosions are purportedly huge, but we haven’t found the decoy very effective in practice.

The stimpack (unlocks at level 21) is a shot that speeds you up and makes you invincible for a short time. It’s pretty great in a jam, but its cooldown is understandably quite lengthy.

Your gear and your heroes can be updated using coins, in exponentially greater quantities. This increases damage, reduces cooldowns, and so on. You’ll find coins littered about in the stages and in the chests that you get for levelling up and earning enough stars. More than any of those sources, though, you get coins in huge quantities at the end of the events you take part in.

But coins are only half the story. You also need…

These are specific to particular heroes and bits of gear, and you need to collect them in increasing numbers in order to upgrade your stuff. So, even if you’ve got a billion gold coins, you won’t be able to upgrade Karen, say, until you’ve got the requisite number of Karen-specific upgrade cards.

You get two random upgrade cards after each stage, and you get piles of them in the big chests you intermittently receive. You also get a small chest for free every four hours, and you can buy upgrade cards for gold if you’ve got a glut of the latter and a shortage of the former.

There’s more, including gems, keys, and events, but if the above is plenty to give you a grasp of the core gameplay and set you off in the right direction.