I’m not sure if anyone out there who watches Adult Swim can actually say they don’t like Adult Swim and all of their shows, or at least a majority of them. Adult Swim also has mobile games, one of which is already out on iOS and is coming to Android tomorrow. What game is this? Why it is Robot Unicorn Attack!

With Robot Unicorn and rainbows and a name like Unicorn Robot Attack, how could you go wrong with this game? Set to launch tomorrow, Robot Unicorn Attack will be priced at $1 and will help pave the wave for Adult Swims official application that is set to be released in May this year. The application will give people access to shows such as Robot Chicken and Aqua Team Hunger Force.

For those of you who do not know what type of game Robot Unicorn Attack is, it is a continuous side-scrolling platformer with a robot unicorn control and collect fairies and shoot rainbows while trying to get as far as you can. Think Canabalt but with color, rainbows and fairies. 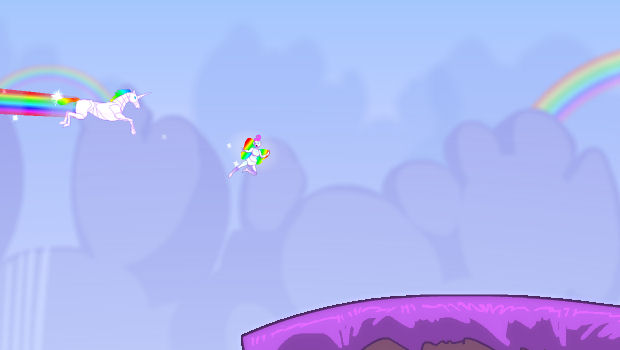 Also in the pipeline for games that will be coming from Adult Swim are Ameture Surgeon and 5 Minutes to Kill Yourself which are currently available for iOS devices. Those two games are most likely the next ones coming to Android according to Jeff Olsen, VP of Adult Swim Digital and Games.

Robot Unicorn Attack will come complete with cross-platform OpenFeint support with the possibility of the ‘Heavy Metal’ and ‘Christmas’ versions coming to Android as well in the near future. Feel free to try out Robot Unicorn Attack in free flash gaming fun over at Adult Swim.

Update 10:40am April 19th, 2011: Just added the Android Market link for Robot Unicorn Attack now that it is available for purchase. Enjoy!