Not a lot of people have heard of ASRock or Pegatron, unless you are deep into the PC gaming scene, so hearing about two Android tablets coming from a motherboard manufacturer might not just tickle your fancy all that much. However, Pegatron is an OEM division of Asus and ASRock motherboards have been sponsored by Fatal1ty.

Of course if you don’t know who Fatal1ty is then I wouldn’t suggest worrying about the companies or what they produce. They are part of the PC gaming industry for the most part and now planning on jumping into the Android tablet world. So with that said, could these two upcoming tablets be geared towards mobile gaming? Quite possibly.

Both the 7″ and 10″ tablets will run Android 3.0 and both will be sporting the Tegra 2 chip. Those are the only two specs mentioned at this time but if ASRock wants to compete in the ever growing Android tablet market, they are going to have to come on strong. Until then, check out this rather large, sexy motherboard by ASRock, this is the Fatal1ty P67 professional motherboard, in case you were curious. 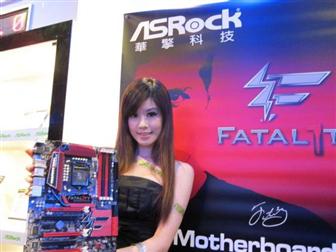 Who knows, maybe we will see a Fatal1ty edition tablet, hah!