We knew this day was coming for awhile now and it has been under development for the past couple of months. Now the test drive of selling tablets in GameStop stores and on their site has officially gone live and begins today. The selection isn’t that bad either when it comes to choices.

So far the retail chain is offering up four tablets: 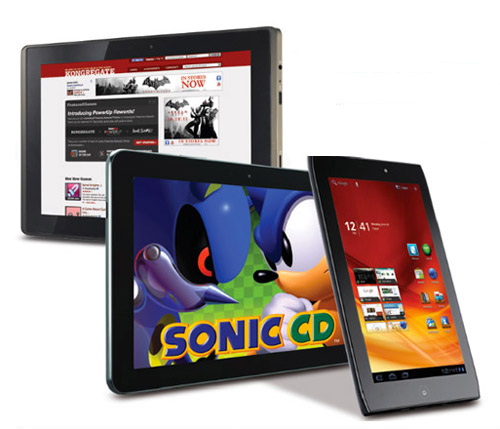 Each tablet will come with Kongregate’s Android App of course, since GameStop now owns Kongregate, and also seven free games from various developers such as EA’s Dead Space, Vector Unit’s Riptide GP and and the yet to be publicly released Sonic CD title from Sega. They are also offering their own bluetooth controller, similar in style to s PS3 controller with the dual-analogs sticks and all the buttons, for you to purchase should you want to really get serious about gaming.

Tablets are currently available in about 200 various GameStop locations already and will probably hit all of them soon once this test drive ends. The only thing we have to wait for now is GameStop’s possible, or should we say inevitable, jump into DLC games for Android tablets. Currently that is still under development and will most likely use their Spawn Player which they now own after their purchase of Spawn Labs. You can check out the new storefront for the tablets in the GameStop link below.