While the overall visuals look pretty much like Ice Cream Sandwich (Android 4.0), what has caught people’s attention is the search bar at the top which has been redesigned. Since the search bar has been integrated into the launcher itself now, that means this could be a new version of Android that will be making its appearance at Google I/O. Now whether it is just another iteration of Android 4.0 or the upcoming Android 5.0 Jelly Bean OS remains to be seen. 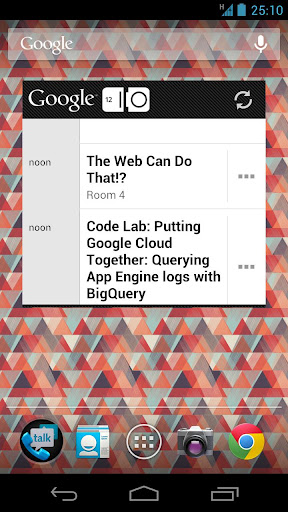 One other item to note is the time in the screenshot in question above which reads 25:10. Some people are speculating that this could be a date (October 25th), maybe to signify when Jelly Bean or whatever version of Android is in the screenshot will go live.  There is also a Chrome browser logo as well which is interesting. Of course this could all be just Google screwing with us which certainly isn’t unheard of either.

So what does everyone think? Jelly Bean, another version of Android 4.0 or Shenanigans? Let us know in the comments below! Either way we will find out during Google I/O 2012 I’m sure.