Scoreloop is a social gaming platform for mobile games and has recently added support for Android games. Scoreloop allows users to track other player’s achievements as well as share games with friends. Two of the most popular games for Android, Jewels and Toss It!, now use Scoreloop and the company claims it’s growing faster than Foursquare.

Scoreloop is claiming that they are growing so fast that they are getting 300,000 new Android users per week! Their two main competitors are Ngmoco’s Plus+ and Aurora Feint’s OpenFeint platform which are both iPhone based services. In a recent update to the Scoreloop development tools a new feature allows developers to institute the ability for users to connect to their friends MySpace pages and it already came with Facebook connect. 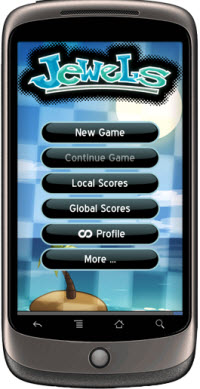 Users can find friends using various search methods including their friend’s emails, usernames, Facebook accounts and send them invites to play games. One of the main features of Scoreloop however is for developers and the ability to add more revenue streams such as going to a Freemium business model (where the game is free but addition ‘perks’ are available in game at a small price. This business model has been used by free online MMO games for awhile now as well as on the iPhone) or to offer new exclusive content and in-game currency in the same way.

Lastly, the developer tools also offer analytics in-game so you, as a developer, can improve your gameplay quickly when improvement is needed. What does this all mean for us gamers? Easy. It means that game developers who currently are not developing for Android have one more reason to port their games over, especially if they already have the Freemium business model in their games for the iPhone. This means we should start seeing even more iPhone games being ported over to Android devices since one of the main concerns for developers has been income from games.

The SDK for Scoreloop is available in three flavors: Standard, Core Social and Core Social + Premium service and all are free to download. I think we will start to see a lot more Freemium games coming to Android.