Each robot is still the same BB-8 robot but with a new ‘head’ themed around a particular Star Wars character: Luke, Darth Vader, 3PO and Princess Leia. These can all be made now with anyone who owns a BB-8 robot as well as a 3Doodler + plastic strands, a golf ball, masking tape, and a small magnet. So it’s kind of a DIY project, but it is pretty cool that you can do this with the BB-8. 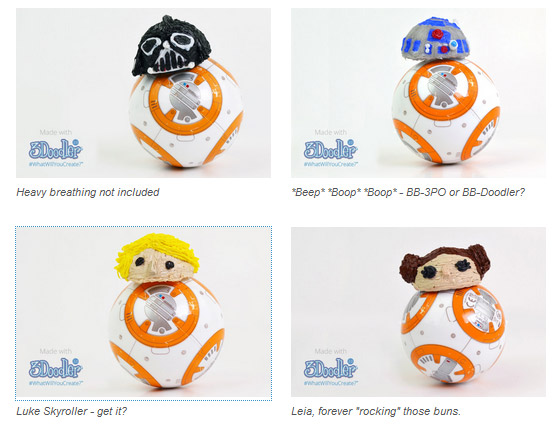 In fact you can probably do a lot of other ‘heads’ for your BB-8 robot as well. These four are just the ‘official’ ones right now. 3Doodler has their guide up with step-by-step instructions on how to make these new Star Wars heads for your BB-8, which you can access through the link below. This doesn’t effect how your robot performs either, so you’ll be able to continue playing with it after you give it a new head.