Some games that comes out for Android are great to play right off the jump while others are good but have the potential to become great. Tank Hero Beta is one of those games that has the potential to be great. As it stands, in beta form, it is a good, addictive game to play, especially if you like driving around and blowing other tanks up!

On-screen D-pad and tapping, those are your actions to use to move through each stage and destroy the enemy tanks. D-Pad to move and tapping on an enemy will shoot your weapon. Your primary weapon shoots shells that will bounce a few times off walls if they don’t hit an enemy tank right away but so do the enemy tanks. 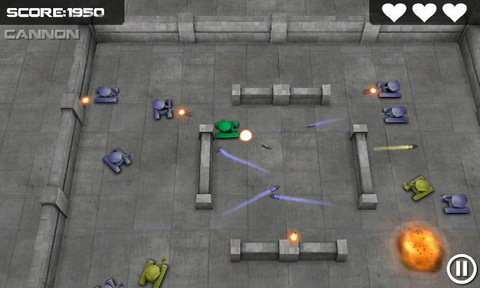 Graphics are quick rendering and in some cases well detailed, like when a tank explodes. Controls are responsive and fast. Right now it is a good solid game to play but what would make this a great game is multiplayer and a level editor for users to make their own levels to fight other players on. Good news is, multiplayer is something the developers are looking into with ideas such as capture the flag!

If you like tank combat games, this is a good one to get and kill some time with. Keep an eye on it though because it looks to become a very promising great game in the near future, especially when multiplayer is released. You can grab Tank Hero Beta off the Android Market for free right now.