Have a WiFi network and an Android phone? Of course you do! Ever wish you could use the two together for transferring your media and files seamlessly from your computer, ditching the cords? Meet WebSharing, the most feature complete WiFi access tool for Android by the developers of SystemPanel that we reviewed last week. 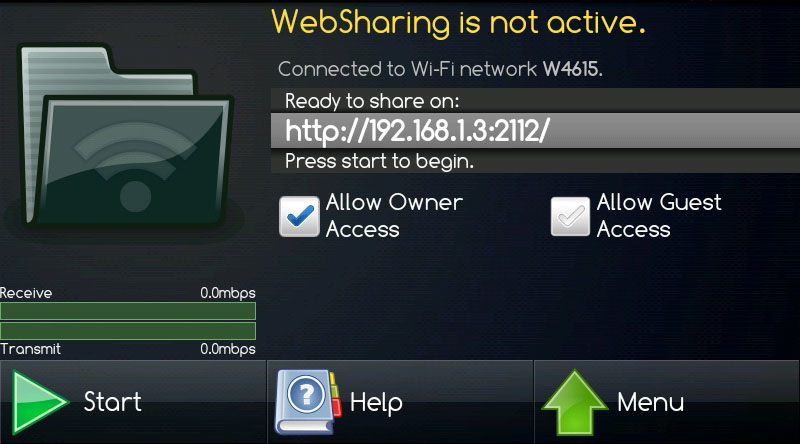 WebSharing shares all the same design elements as SystemPanel, which doesn’t exactly work against it. Failing to fit into Android’s design language properly makes it feel out of place compared to many of the other apps, but we welcome the choice — many Android apps don’t look this good. Thankfully, the dead space we found in horizontal mode throughout SystemPanel is non-existent. Almost everything can be done without menus or settings after the first time using it and setup is simple if you plan on avoiding the USB/Network mount mode (more on that later). 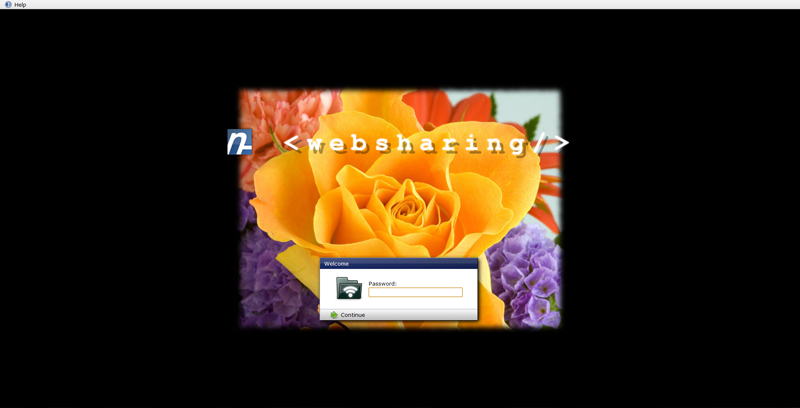 Interface on PC is run through your web browser by entering the name of the device on the connected network (eg: 192.168.1.3:2112/). It feels clean and navigation is easy but an outdated version of GNOME seems to have influenced the developer heavily — and it ain’t pretty. Iconography is unimpressive throughout, and while it gets the job done without looking ugly it generally feels aged and out of place on more modern operating systems.
{gallery}/galleries/WebSharing/pc{/gallery}
Functionality:

WebSharing can be hugely useful when you forget a USB cable at home and you just need to hear that song or transfer that word file to your PC. The app makes it easy to listen to upload and download music, view pictures and stream videos directly from the comfort of your favorite browser. Flash is, unfortunately required for the included multiple file upload feature, but it’s not a maligned feature. It manages to stay connected even at distance from the router. Pocketing the phone and walking 20 feet upstairs to a bathroom doesn’t seem to affect the connection, but your results may vary according to location, router and device. 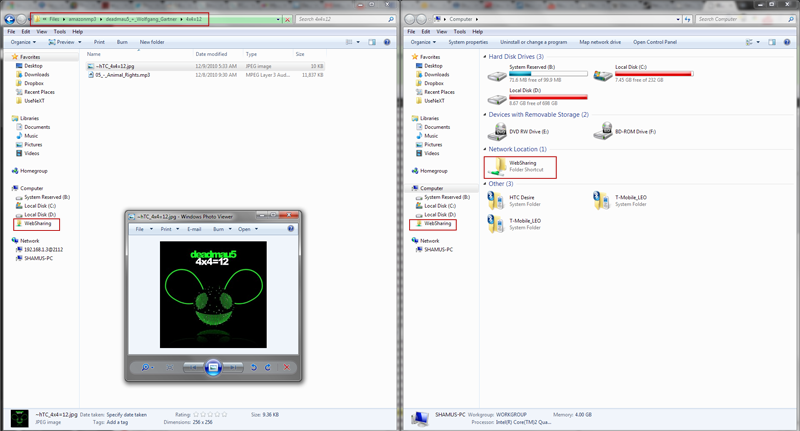 Our main gripe with in the functionality department is speed when transferring files — it’s just not fast enough for actually synchronizing a large music library or movies. It’s exacerbated by USB/Network mount mode (in Windows 7, at least), which is hugely useful if you take the time to set it up (instructions in ‘Help.’) It’s referred to as ‘WebDAV’ in settings and works with all major operating systems allowing for control of the device through your file manager of choice. The cell networking functionality listed in the features above is unfortunately more theoretical than functional. You see, in order for cell sharing to work you need to be outside of a network proxy, and since every cellular carrier has proxies implemented in North America; it’s nearly impossible to use.

Unfortunately to get WebSharing to work, I had to open some ports on my FiOS router but you may not have the same issue. Finally, password randomization is available, as well as a fixed password (although less secure) with the option to e-mail passwords with a clickable link to get right into the interface.


Wrap Up:
WebSharing is more a tool of luxury and laziness than true necessity. It proves too slow for large files and the PC interface proves too ugly to show off to friends. Mounting as a network drive is one of the most useful features, and avoids the outdated web UI but seems even slower. While I could find it coming in handy in situations when you forget a USB cable I just don’t see it as much of an issue anymore: micro USB is everywhere by now, and the app doesn’t support ad-hoc connections so without a router you’re SOL. But, if you’re looking for a cool tool to experiment with or WiFi syncing is the thing your day is missing we definitely recommend checking WebSharing out.
Score: 3/5
Android Droid Featured Gamers gaming inc. NextApp review WebSharing wifi wifi access