Review: A state of Conquering – this is Age of Conquest

Age of Conquest is a Risk type strategy game. The goal is to conquer all of your opponents. I specifically played the Age of Conquest: Europe version, their most popular one. The game is the same in all of the Age of Conquest series, simply different maps. If you have played Risk, then you should understand the basics of the game pretty quickly. There is a tutorial you can do at any time to help you understand the game. There is also an in game help section which explains the game well. 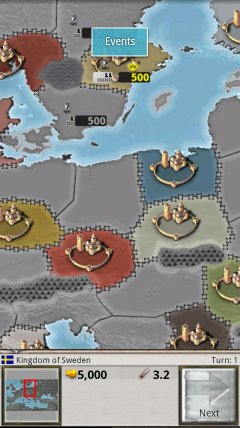 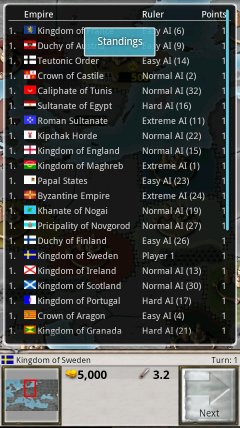 The game is very addicting. I would find myself saying, “ok, one more turn” Also I found myself getting mad at the IA for its attacks. I wanted to hit him back and hit back hard. LOL

The game is very basic and I do not mean that in a negative way. Yes it is not the fanciest graphics or sounds but it is a great game that allows you to simply concentrate on what you need to do; which is build an army, defend your territories and expand. You will have numerous fronts to watch and will need to decide where and when to build/attack. Age of Conquest is not a quick game. A single game should not take days but it won’t take 5 minutes either. I usually found myself playing for a while, saving the game and then coming back to it.

The game has a nice set of options to vary the game play and thus the difficulty.I am still working on figuring out all of the ins and outs but it is nice to have a game that takes a while to go through.

-Number of opponents (having a ton of enemies is hard!)
-Your empire
-God mode (fog of war)
-Random Placement
-Diplomacy- the ability to create alliances in the game
-Campaign Game- where you determine the options
-Random Game – the AI picks for you 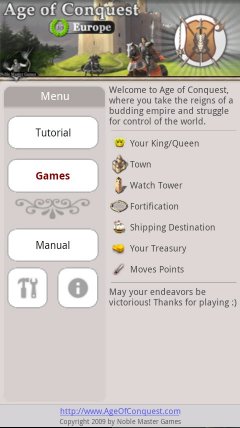 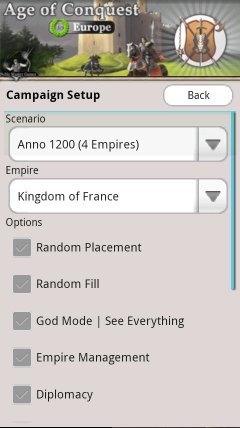 Empire Management – when this is checked you open up a new side to the game, economics. With this option you can check on population morale, adjust the tax rate and percentages spent on military and economy. As you expand your empire, you will acquire new lands, with increases your population, thus more folks to tax, etc. This ads another side to the game  but most times I let the computer determine all of this so I can focus on the expansion and conquest. If interested, in the manual they have a detailed explanation on how resources, movement, economics is determined.

Ok, there are a few items in the game that I did not like or are not present:

-Can only play in portrait mode
-No pinch to zoom
-Can only have 1 game going at a time
-Only 1 map per game
-Text seems to be small, thus hard to read (at least for me)

Would this hold me back from the game? No. Overall Age of Conquest is a solid game,which provides plenty of replay. With the ability  to vary the number of opponents and other factors, you are pretty much guaranteed not to play the same game twice. So for you turn based strategy fans, give Age of Conquest a try. There is a lite version if you want to try before you buy. As I was reviewing the game, I contacted the developer with some questions and thoughts I had. I have posted our conversation on my site DroidReviewCentral.com.