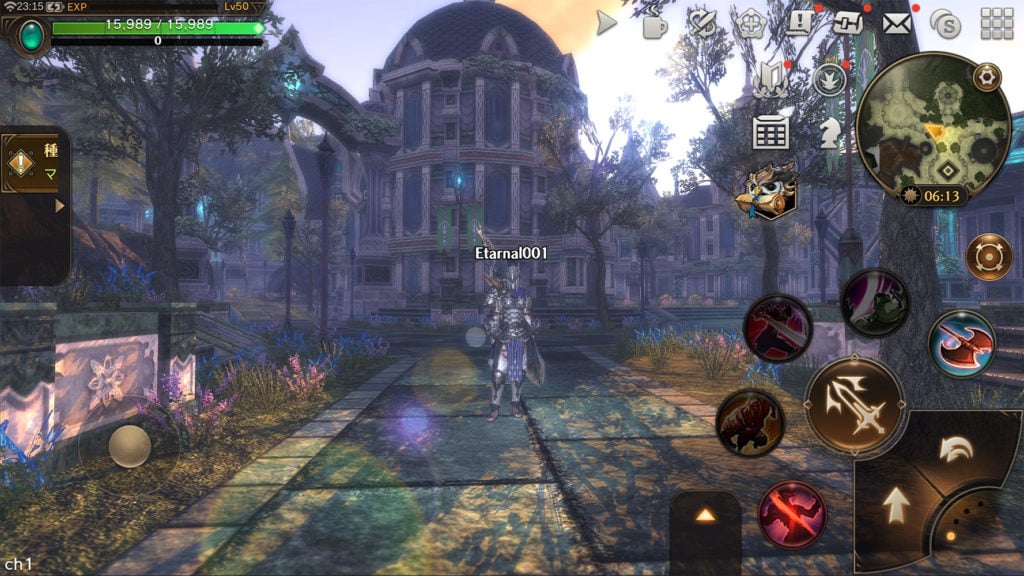 The release of Eternal Kingdom Battle Peak introduces a new MMORPG to Android. It’s developed by Asobimo, Inc, a team with a lot of experience in developing these types of games – perhaps most notably, Iruna Online, which is played by some 3.5 million users.

They have a reputation for delivering great-looking games, and EKBP may just be one of their most ambitious to date. They’ve brought on board some top-tier talent to aid them. For fans of MMORPG, there’s plenty to like.

What Is Eternal Kingdom Battle Peak?

Self-described as a “Japanese” MMORPG, EKBP involves many of the tropes you’d expect to see in this type of game: players can join a party to complete dungeons, join up to 200 players in siege battles, craft items and equipment using an expertise system, and take on an assortment of jobs, and use an attribute system to modify them. So far, so standard.

But if you’re a fan of artist Yoshitaka Amano (who may be familiar to many as one of the artists behind Final Fantasy, or for working on the anime adaptation of Speed Racer) who is credited with character and monster design, or the Japanese rock band Luna Sea (credited with creating the theme song) then EKBP may be particularly appealing.

EKBP is undoubtedly a game that doesn’t hide its influences. If you’re a fan of Final Fantasy, this will almost certainly feel familiar.

It is though, a game set in its own world, where the humans of Nordania are under threat from a nation of various races known as Horde. A truce that has held for 16 years is now coming under threat, and Nordania needs heroes to defend it.

You have a choice of one of five main character types to choose from:

There are the usual customisation options that you’d expect from any RPG – you can change hairstyle, eye colour, face type, ears, and even voice type. And you can choose one from three fairy companions who will join you as you explore the world.

The game certainly looks the part. As you’d expect from such a respected artistic team, backgrounds are pretty detailed and attractive to look at. Characters are beautifully drawn, and animations are smooth, in the main. As we’ve said before, you can clearly see the shared links to Final Fantasy. And in our view, from an aesthetic standpoint, that’s no bad thing.

Movement is controlled by a circle in the bottom left-hand corner of the screen, which leaves your right hand free to reposition the camera if you want to look around. Your right hand will do most of the work, as that’s where most of the buttons are located.

Combat is largely as you’d expect it to be: press a button to choose your target, press one button to attack, another to defend, and another to use any special moves you might have. We found the number of buttons on-screen could be distracting, and certainly initially took getting used to.

We did notice some performance issues while playing. Most glaringly, we lost connection with the game on a few occasions. In one particularly notable instance, when the connection was restored, our character had disappeared from the screen. We had to close down the game and relaunch it to get her back.

These sorts of issues are not uncommon when a new game launches, as servers often struggle to cope with demand from players who all want to try it for themselves. Only time will tell if this was simple teething problems, or something more fundamental.

We also need to highlight the fact that there is a Gacha system in the game. They do offer two free Gacha opportunities per day, one every morning and one every evening. But the presence of Gacha is something to be aware of. You can decide for yourself how much that matters.

Peak Performance, Or A Long Hard, Climb To An Insipid Summit?

If you aren’t a fan of MMORPG, then Eternal Kingdom isn’t suddenly going to make you change your mind. But if you’re a fan of MMORPG, then EKBP will tick a lot of boxes. It contains many of the familiar tropes that you’d expect to see in this type of game, and provides a comfortable, familiar gaming experience, even if you haven’t played it before.

For some people, this will be part of the appeal. Playing something that’s similar to games you already know you enjoy makes a lot of sense. For others, that familiarity might risk turning this into something that feels more derivative. It’s a game that is ‘fine’, but from what we’ve seen. it doesn’t really do anything remarkably different to what’s already out there.

It’s down to the individual to decide where they come down on that particular debate. But Eternal Kingdom Battle Peak knows what it wants to be, and for the most part, achieves its objectives. And it’s free to play, so you have little to lose from giving it a try.

EKBP isn't going to score big on originality. But it looks great, and fans of the genre are likely to enjoy it.