Published by HyperBees, Space STG is a RTS (Real-Time Strategy) set in (you guessed it…) space, tasking you with conquering 14 territories in an over-world map. Each territory contains a scenario in which you are tasked with capturing all enemy’s planets. Your basic strategy concept but HOLY SPACE GODS this game is deep!

Gameplay: Each territory will start you out with different planets already under your control, different fleet sizes and configurations, and your starting planet(s) at different levels of development. There are 8 structures to construct, 8 ships to launch including nukes, 8 planetary defensive units to construct, and 8 technologies to develop with 4 levels for each. Not all of which are available from the start of the game and are unlocked as you progress through the different territories. Usually I hate when I’m forced to play for hours to be able to use all the features in a game but in this case it worked perfectly. Not once did I feel I was crippled in the early stages of the game and if Space STG started with everything unlocked I would have been totally overwhelmed by depth of the gameplay. 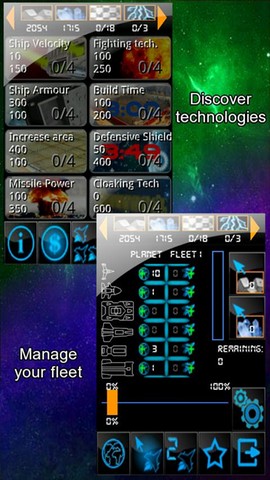 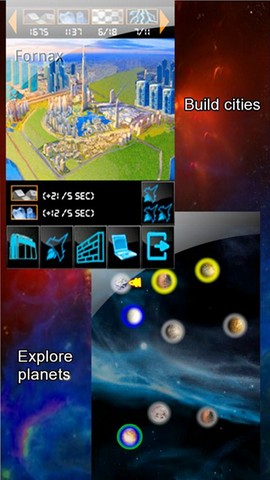 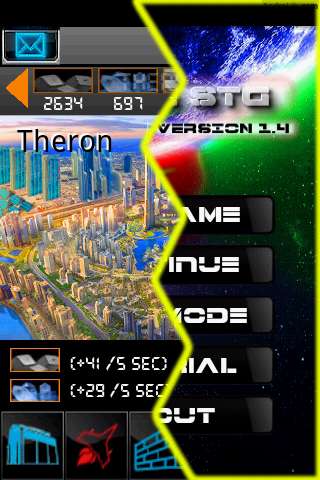 This brings us to the main short coming for Space STG and also its greatest strength. This game is deep! There is a pretty steep learning curve you have to push through in order to reach your planetary domination potential. A tutorial included, however, it only covers the basics of how to play by using tool-tips when you click on most anything in the game’s interface. It teaches you enough to be able to finish the first few territories but around 3 hours in, the game’s difficulty jumps drastically and forces you to use the newly unlocked technologies and ships in order to even survive, let alone destroy. Strategy is a big deal in this game and the pacing is fast if not frantic. I found myself cycling through planets building ships in some, developing technologies in others, transporting resources from one planet to another and trying to track the enemies movements as fast possible. Its easy to get destroyed after you finish the introduction levels.

Graphics and Sound: Space STG has a good looking planetary map and conveys the information you need to see fairly well. One hard thing to think about when reviewing this is, how could this get better? There is a LOT of information to be pushed out to the player on such a small screen but it does a fairly good job at letting you know what you need to know, without cluttering it up with everything under the sun. Overall, for the type of game it is, it looks fairly good and for sure gets the job done. If your into this type of game, graphics are the last thing you really care about anyway. The interface can be a bit confusing in the beginning though.

The sound can be a little annoying at times but totally necessary in order to know when your units or buildings are finished being constructed. There is also no background music but judging from the annoyance of the sound effects, this wasn’t a bad choice. 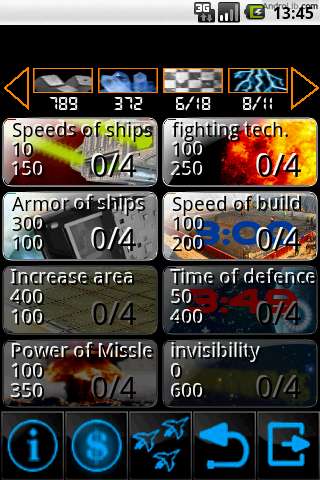 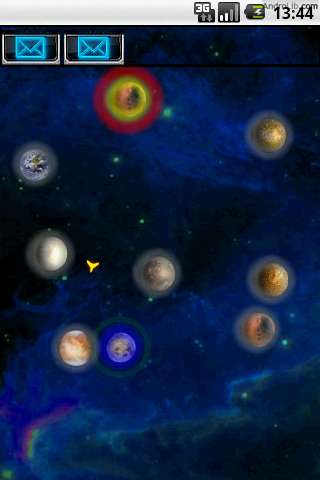 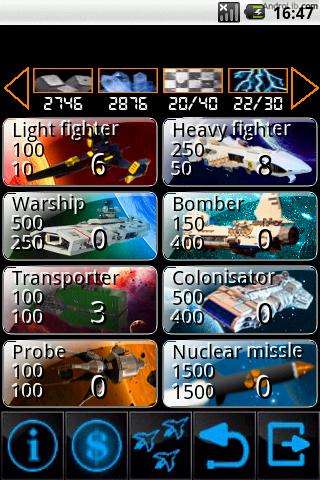 Controls: They work. Not exceptional though. Touch the planet you want to inspect and a menu is opened  showing your fleets. Touch the Cog button to build or develop in your planet. Most of the time it works well but I sometimes found myself desperately trying to select a planet about to be attacked so I could build defenses without being able to open the planet I was going for, costing me precious seconds.

Overall: Space STG is a great game for those of us who are looking for a deep and highly challenging strategy game on the droid. Tons of different ways to go about your domination and no one strategy will win every match. Its a hard game to match as far as bang for your buck since its priced at a worthwhile $2.31. If you are not into strategy games however, this is not for you due to the learning curve and lack of a strong tutorial. Best to start out on something simple and move up to this when your ready for a real challenge. If you have the gusto to stick it out till you know what your doing, Space STG will provide HOURS of amazingly deep and challenging gameplay.

This contest is now closed. We will post the correct answer and winners shortly. We will contact you if you have won. The sale on Space STG is still on though.

Here’s what you need to do:

Question: What are the names of the 3 clans from the Space STG game?

Be one of 10 people to post a correct answer to that question in the comments and you will win! Don’t worry if you do not win, Hyperbees is also dropping the price of Space STG full from £1.49 to £0.99 until July 31st, 2010! Good Luck!