It is time once again for another Weekend Play Game Review. Weekend Play gives Droid Gamers an opportunity to highlight some games that may have been overlooked in a busy week of game releases. Some of the games may have been released a couple of weeks ago, but they still merit reviewing, so you can have an opportunity to catch up on some good gaming during your weekend.

Every now and then we come across a game that gets it right. The graphics are good, the game play controls work well, and it is enjoyable to play. That game for this weekend’s review, is Skate Lines, by indie game developer and skater, Daniel Stefan Zeller. If you are fan of skateboarding games, then you should give this one a try. Why? The primary reason is because it is all about skating. There are no points assigned to your tricks. There is no high score to be obtained. It is skateboarding pure and simple, for the love of pulling off a combination of tricks, and looking good while you are doing it. Even if you are a novice at this type of game, Mr. Zeller, has set up the controls in such a way that they are easy to use.

Basically there are two buttons that remain present on the left side of your screen. One button you press and hold to do nollie/fakie tricks, and the other button is for accelerating your skateboard. On the right side of the screen, you flick in different directions to pull off your tricks like ollies, kick-flips, pop- shuvit, hard flips, heel flips and so on. Flicking up allows your skater to jump over obstacles. While in the air, you are able to rotate your skater left or right, by touching the left or right side of your screen. The last bit of controlling your skater occurs when you tilt your device left or right, for nosegrinds or 5-0 grinds. The controls are extremely fluid. A really nice design element with the controls, allows them to appear in a circle wherever you touch the screen, which makes it nice if you are left-handed, or simply want the tricks control in a different place on the screen. If you are not touching the screen to flick for your next trick, the controls disappear. You can tell the controls were a big part of the game design, by how well they work. The skater’s movements are fluid, and watching your skater pull off tricks is enjoyable. 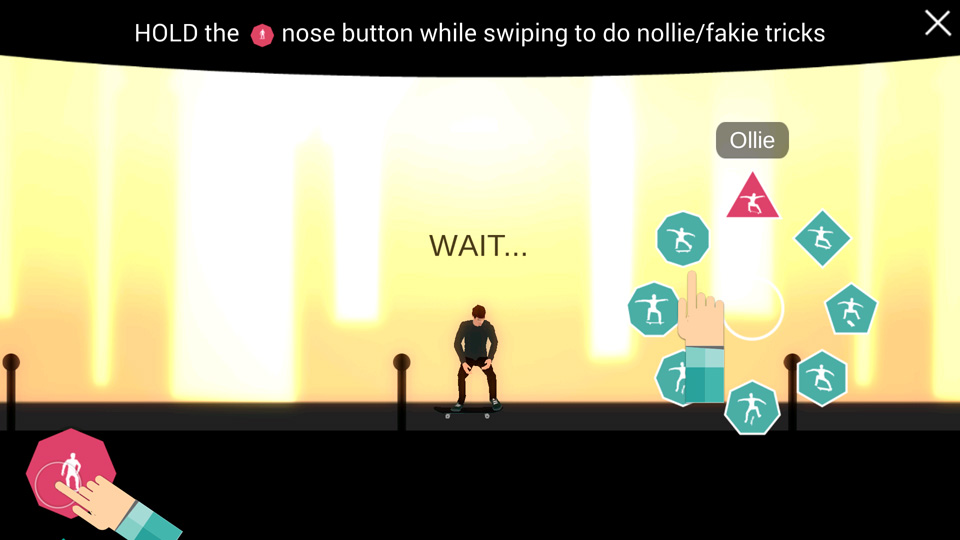 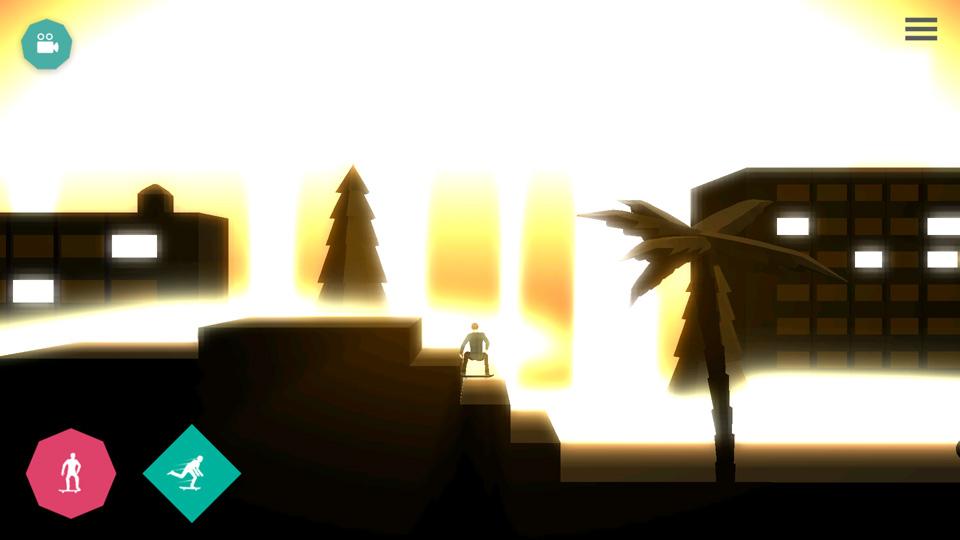 The graphics in the game are striking.  There are two skating environments in the game. One is Mornings are golden, and the other is Night sesh. Both environments have a broad range of obstacles, rails, tables and places to pull off tricks. As you are skating, the primary backdrop is a city that is aglow. The graphics are relatively simple but well done. They enhance the skater’s environment, but never compete with it, which is nice. The focus here again, is on creating good skate lines, which you are able to do with ease.

Rounding out what is available in the game, is the opportunity to record your skating sessions. You can share them by uploading them to Everplay, FaceBook, Instagram and YouTube. Recording is very easy. You basically set up flags for where you want to start and stop your video. If you have encountered any other games with this feature, it works the same here. Another successful component to the game is the music. There are two different tracks, one for each environment. The music is chilled out, with nice piano solos and beats. It falls in the genre of smooth jazz/hip-hop beats/instrumental. It is perfect for playing with your headphones on and it is quite relaxing. 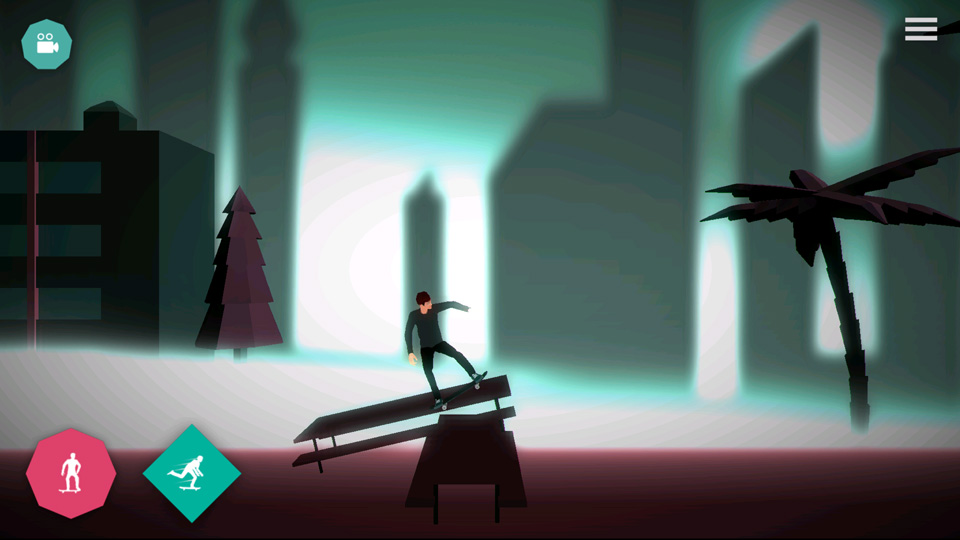 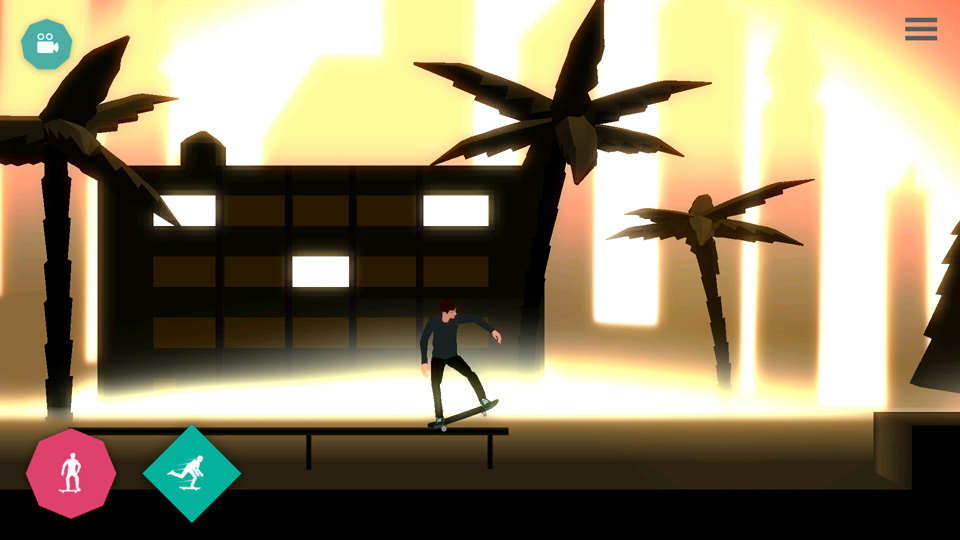 Though I bailed quite a bit while I was playing, I still enjoyed the game a lot. It is one that you can keep on your device to play if you have only a few minutes to get some gaming in. The game is free to play, but don’t cringe. There aren’t any ads to be found and nothing to buy. It doesn’t have Google Game Play Services integration, which I am a big fan of,  but the game doesn’t need it. Hopefully the game will be updated with more environments. The two environments loop over and over again, so once you know where all the best lines are, that is it. So, more would be great to have, in a game that really excels at what it does. If you have a few moments this weekend to download a game, Skate Lines is an easy choice. I imagine this game would even impress  skateboarding legend Tony Hawk.