zGames just released their ghost game called zGhost onto the Android Market. This game is massive in size when compared to the rest of the games on the market (the download is 18.8MB) and is an augmented reality game where you use your camera to see ghosts around you. Sound familiar? It should because we’ve written about a similar game that’s on it’s way to Android.

We previously wrote Ghostwire which is being ported over from the Nintendo DS to Android and should be appearing soon on the market. zGhost is a lot like it. Some features include:

– See moving ghosts over the live video preview of your Android camera.

– Take photos of the ghosts you see, in real time.

– Choose to see only friendly ghosts, or see if you can handle the scarier “Freak Me Out” setting.

– Use “Paran Mode” to select and place the ghost where you want it to appear. Works indoors and outdoors, using the accelerometer and compass.

– See more than 10 different ghosts! Detection for more ghosts will be added with several upcoming updates leading up to Halloween. Get zGhost now and you’ll receive any future ghosts. 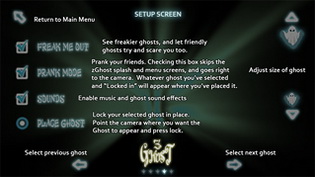 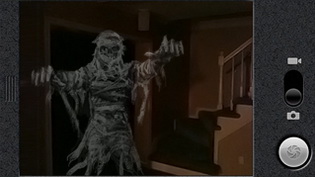 This is an exact port of their iPhone version of the game which is why the size is so big. It should have been a smaller size with the rest of the install being a one time download on first run of the game to your SD Card. As mentioned in my artcle about Paradise Quest, I went on a little rant about how Google needs to implement the saving and running games on the SD Card natively instead of using an app like Apps2SD. This is another prime example for older gen phones.

So if you got a new gen phone, give it a shot and let me know. Old gen phones can still download and install this if you have enough room for it. This is fairly entertaining but I think Ghostwire will probably be better, it looks a bit more ‘real’. I haven’t ruled this out though, I’m going to give it some good play time first before I make a final decision.