Pocket Empires, developed by Pocket Play, is a MMO-strategy game where you build your empire, conquer others, capture creatures and expand your domain. You have two countries to choose from on the Beta server with another server coming soon. This is your standard strategy game where you build and conquer but with nice graphics and some animation too.

You start off with your little plot of land where you build your castle, farm and gold mine and from there you expand building your Command center, Barrack, Archer training, labs etc etc. Going into map view will allow you to see other cities around you and also other creatures around you that you can raid/conquer/spy on.

-Over 10 unique structures to build your city.
-Over 30 different creatures to be recruited or captured.
-Over 40 techs & 50 items to enhance your power.
-Huge map you and other players conquer.
-Ongoing game updates with even more.

As you can see it’s a pretty in-depth game. Dragon country is already full but I managed to get into the other country so there isn’t a whole lot of room let which means now is the time to get in on this game. I’m sure space will expand soon but there’s nothing wrong with an early start. This game is also a Real-Time Persistent environment meaning that your empire will continue to grow when not logged in but also that you could be attacked when not logged in. 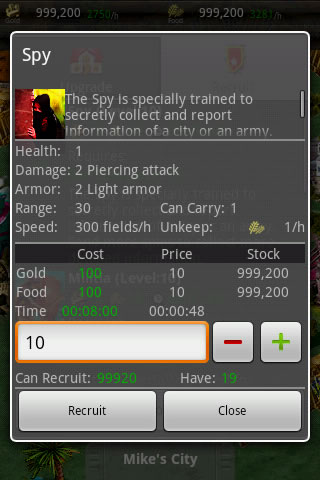 You can also buy power-ups and other things with Gems which is the currency of the realm. You start off with 100 and gain more when you refer someone to this game (each get 100). I’m sure at some point you’ll be able to just buy Gems as well. So far this seems like a pretty good game, only just started building my city (named Droidgamers). I’ll see if I can’t come up with some quick building strategies or guides for rush/conquer play styles.

This game is available for Free on the Android market right now. It is ad supported but the ad is just a small banner ad that only appears (as far as I’ve seen so far) when you open the bottom menu. If you get this game you can use my referral code: 4mxp if you want.