Is a Game Center type of feature coming to Android soon? It is a possibility and to understand exactly where this is coming from one has to look at both the recent purchases by Google dealing with social gaming as well the new App Inventor that is currently in beta. I just got accepted into the App Inventor beta and while looking around I stumbled onto an interesting feature.

This feature, listed in a section called “Not Ready For Prime Time Components”, is called Game Client. While there is almost no information within App Inventor regarding this feature, the little information bubble states that this feature will provide a way for applications to communicate with online game servers.

While this is more possibility then fact, combine that feature with the recent purchases by Google of Slide and Jambool (Social Gold) along with investments in companies such as Zynga and it starts to form a picture that this could very well be a possibility. If this were to actually come to light then Android gaming would take on a whole new light with online real-time multiplayer games much more easily implemented by developers into their games. If it isn’t about multiplayer then it could be a central hub for more social activities regarding gaming like Game Center. 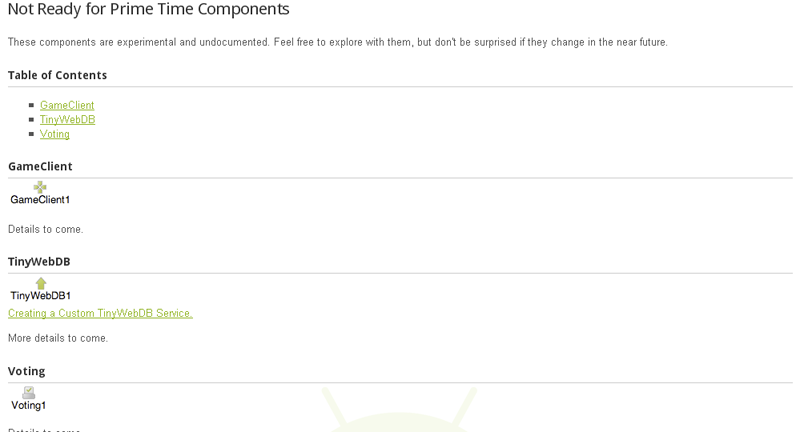 Unfortunately there is no way to even test anything regarding the Game Client as nothing is available so for now we get to sit here and wonder until someone from Google answers us back about it. So the question is, what do you think this feature is for? A Game Center like the iPhone has, multiplayer games hosted by Google (or similar setup) or something else?