HTC’s HD2 was a beautiful phone ruined with ancient software many reviewers initially concluded. It has some of the most advanced mobile hardware in the thinnest package available. Likely the last of HTC’s WM6.5 phones the HD2 was left to die with few updates from HTC and little marketing attention after it’s launch. DroidGamers does an in-depth review of the HD2.

HTC and T-Mobile released the HD2 back in March but it was unfortunately stuck with the aging (yet incredibly flexible) Windows Mobile 6.5 operating system. We thought with the new life XDA has given it that HTC’s device it was worth a second-opinion. Being as fed up with the speed of the G1 as the rest of you likely were, ordering the first snapdragon device in the US wasn’t much of a real decision but I have to say waiting was the hardest part. Say what you will about flexibility in regards to Windows Mobile but don’t speak of usability. Menus hide inside other menus and the whole experience is confusing and annoyingly complex. Snapdragon looked appealing enough to order it day-one and deal with it’s software until Android was available — and we think it was definitely worth the wait. The added speed boost, new features and the beauty of the phone almost speak for themselves. UPDATE: The tutorial is now available, get to installing Android! 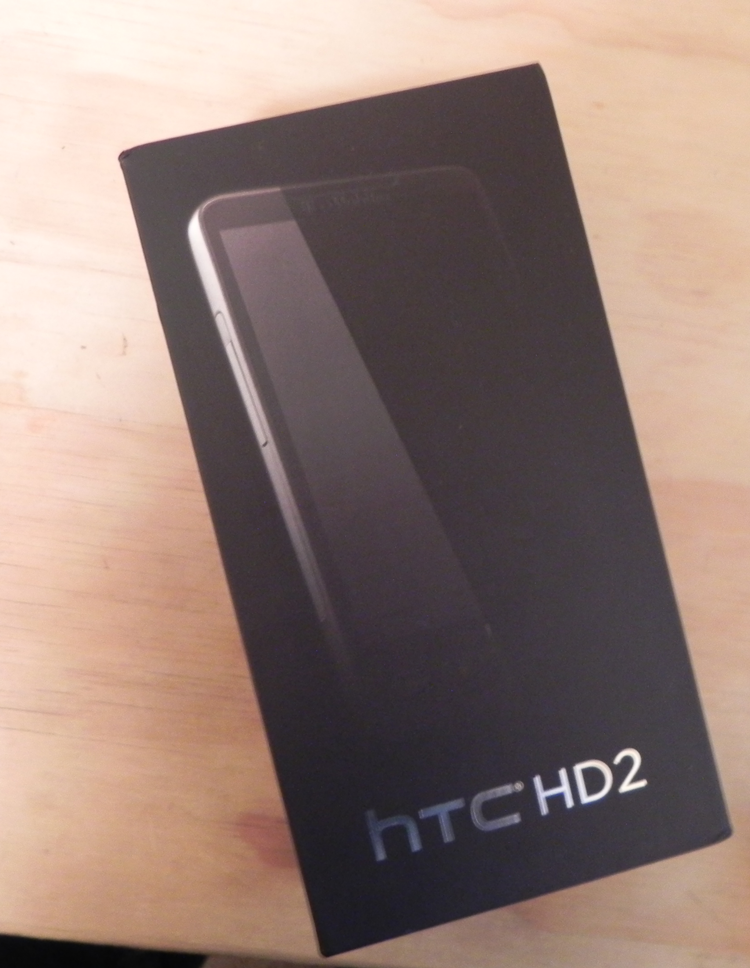 In the box along with the HD2 is a pair of above average ear buds with remote and microphone, micro USB cable for both the charging and syncing, a USB wall charger, and manuals.

One thing worth mentioning in the box is the ear buds. While they lack bass and treble they produce a flat, respectable sound below maximum volume and sound good enough for most people depending on your taste. Of course serious audiophiles will be disappointed but they wouldn’t be looking at a smartphone with a pre-amped headphone jack anyway. With heavy bass they distort at around 90% volume, decent enough for everyday use.

At just 11mm thin the feeling of unnatural thinness and the phone’s incredible component density immediately stand out. A face of glass give it an appearance unlike any other and holding it in your hands can either be enjoyable or too frustrating or difficult to manage depending on your hand size. The HD2 is a big phone, for comparison the G1 is smaller than the screen of the HD2 not taking into account it’s thin bezel. It takes up almost all the room in my pockets and doesn’t leave room for much else. However, if you’ve yet to see one of these 4.3 inch phones you need to, it’s an impressive device and we just can’t stress this enough – visually we have nothing to complain about.

The thinness leads to a feeling that it could shatter at any moment just from the tension of your fingers but we assure you it won’t. That’s primarily because it’s built of metal, a strong soft touch plastic that wraps around the phone and provides a grip and scratch resistant gorilla-glass. Gorilla-Glass is a material that allows you to keep your keys and your phone in the same pocket without worrying about scratching that beautiful screen. In fact it’s even been tested with razor blades, knives and other weapons and resists nearly every form of scratching. Being your daily phone you get used to the thinness feeling quickly enough and if you don’t you can always put it in a thin case like in the above picture. This particular case also adds a kickstand – a feature later added to the EVO 4G.

We can definitely say after a little research that screen size definitely correlates with how much time a user spends looking at the screen. After moving from the G1 to the HD2 the battery manager in Android reports on average 60% more screen-on time before dying. 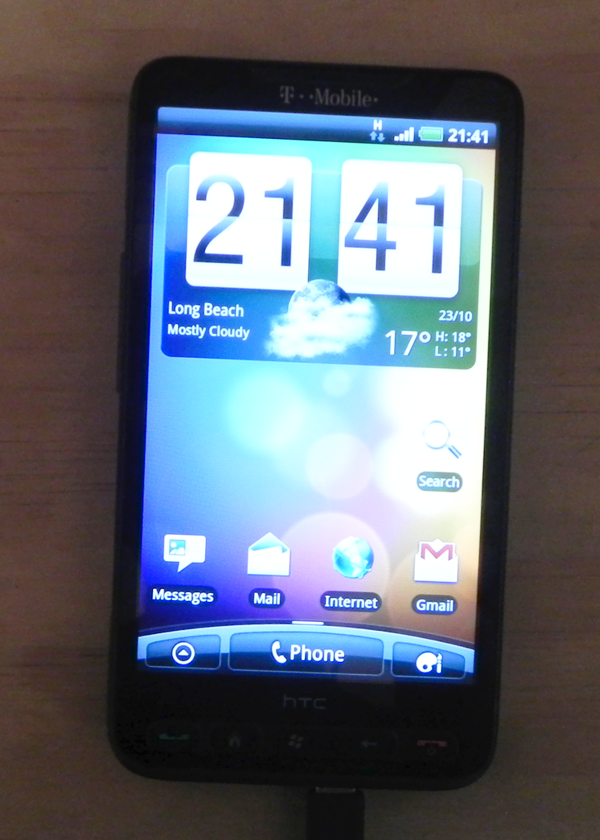 Just weeks after the EVO’s launch on Sprint XDA already had a stable build available based on it. XDA has done a remarkably good job at porting Android to the HD2 with few freezes, features missing or app crashes. Picking which build to use is critical, using the wrong one can be a terrible experience and not all builds work for everyone and it’s something we’ll be taking a look at in our tutorial later in the week. XDA successfully got the Android Market onto the phone so you can download all the apps you want and games you can pay for. Stripped from almost all the ROMs is the Sprint/T-Mobile apps that come on the device out of the factory. It’s a refreshing change and livens up the hardware if you’re used to using it with all those apps running in the background. Qualcomm’s Snapdragon chip does good work here too; launching apps generally responds as fast as you can touch them.

Sense HD is available as an option, though it isn’t the most stable of builds and the camera doesn’t work on them. If you can deal with small but annoying usability problems Sense HD offers a new task-switcher in the notification drawer, new skins for HTC sense and a few HTC applications that make using the phone more intuitive and engaging. The music app has added AmazonMP3 integration, coverflow for flipping through music albums and effects (discussed in just a minute). Also added is the ability to play remote media off of PC’s or to stream content directly to DLNA supporting hardware like TV’s, receivers and eventually HTC’s DLNA box coming later this year.

The 800×480 resolution of the 4.3 inch IPS LCD is competitive with other large Android devices. It dominates the face of the phone and it’s an impressive one. Pulling the HD2 out in a crowd grabs attention because of it’s size, brightness and remarkable thinness. Compared to the AMOLED in the Nexus One the screen is much more usable in daylight and appears to use about the same amount of power. It provides vibrant colors without the oversaturation seen in AMOLED. When holding the phone in specific lighting a grid formation is easily seen on top of the screen, it isn’t an issue unless you focus on it and it’s pretty easy not to.

Sound was never really an issue however there is better products available for listening to music. Speakerphone worked but it wasn’t particularly good, it’s loud but the speaker had some distortion issues. Speakers are as good as can be expected for their size. The phone gets very loud but distorts at around 70% volume and produces little to no bass. It has an echo effect to it, especially when talking to someone on speakerphone but it isn’t that important of a feature to us. With one of several Sense HD ROMs the phone will also support Dolby mobile, SRS enhancements and equalizers to change the sound and effects through the headphones. We found that the first two don’t have such a noticeable effect if there is one at all however the equalizer is intuitive and effective.

Pictures shot above look just a tad grainy when blown up. The pictures bring out the camera’s inability to deal with low-light.They look good enough for a cell phone camera but it’s no N8 — don’t expect to replace your point-and-shoot. Auto focus and exposure options are available and of course easily accessible. You can tap to focus on where you want but it doesn’t seem to make too much difference. There are options for white balance, ISO, a dual LED flash and all the options seen in the standard HTC camera app. You can also apply image effects like black & white, Sepia and the sort. Due to the size of the tiny 5MP sensor images aren’t as clear as they should be. The easily scratched lens and lack of vibration reduction add to this frustration as its near impossible to take a decent shot while moving. There’s a mode for panorama imaging and it’s easy to upload the pictures straight to facebook, twitter or flickr. However, don’t expect features like macro mode, optical zoom or xenon flash. HD video capture was added in some ROMs but it doesn’t seem to really improve picture quality in any noticeable way, it raises the resolution but the bitrate stays the same.

It’s not as impressive as the phone’s price tag leads you to believe. Off the charger at 7AM it lasts with heavy usage until around 6PM. With SetCPU and proper profiling it can last around 24 hours with moderate usage. Depending on your choice of build and how much you use your phone will decide how long the battery lasts. The biggest battery drain is by-far the screen, and keeping brightness low seems to fix most of the issues we’ve had with the battery. It seems there is no minimum for how long the battery should last however, and if you see the battery draining within an hour than it’s definitely that particular build, download a different build — don’t give up on Android on your HD2 yet. System Panel offers a good way of monitoring CPU usage of processes and therefor the battery usage of particular apps. It also offers usage graphs that prove to be useful for tightening battery usage over time. We highly recommend this app for the HD2.

With Android the HD2 becomes a completely customizable, stable user experience that one can’t get from Windows Mobile. We highly recommend the HD2 for Android use and with support for HSDPA data on T-Mobile you should be blazing along as fast an EVO without switching carriers (even though neither of them are 4G). While the camera doesn’t work in some builds and freezes can sometimes be had if you don’t reformat the card before installation this is still a very viable option if you don’t mind dealing with a little occasional frustration. If your looking for a keyboard-less Android phone thats fast on T-Mobile we highly recommended this device over their others in the myTouch line that have a plastic-y cheap feel to them and the Vibrant with similar issues.