Kemco, a game development company who almost exclusively releases old school style RPG titles, has released a new game for fans to sink their teeth into called End of Aspiration. As with a lot of Kemco’s previous titles, End of Aspiration features a good dose of retro style graphics mixed into a full-sized RPG concerning the fate of the world.

Kamco, however, usually try to include new features or game mechanics in each of their releases and End of Aspiration is no exception to this. For example, players are able to freely mix and match a wide range of skills, allowing you to play a little bit closer to your preferred style or class that you favor in RPGs. There is also a new dynamic combat mechanic where you can try to go for reversals in battle using your opponent’s attack. 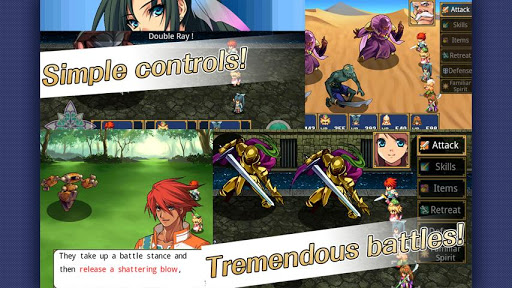 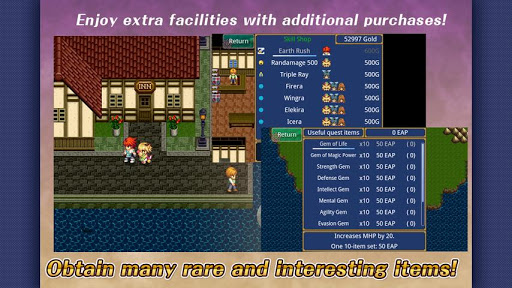 – Simple controls and tremendous battles!
– Beautiful 2D graphics with a friendly warmth
– Features an auto-save function! Enjoy adventure even if you only have a small amount of time, without worrying about saving!
– Aim for dramatic reversals in battles, by using powerful ‘Familiar Spirits’!
– Gain rare items and enjoy extra dungeons by making additional purchases
– Freely mix and match a wide range of skills
– Five characters, each with their own personality

For those of you interested in the storyline, End of Aspiration takes place in a world that peace has existed in a modest state for awhile now. It focuses on two people, Yute, who is journeying around the world as a trader and Eril, the Azure Sorceress, who has been battling it out with a secret group who has been plotting in the shadows by herself for awhile now. In the end, it’s all about the Atomijems, sources of huge power from back during an ancient civilization and saving the world.

If you’re a fan of Kemco RPG titles then you will probably want to check this new one out. Like usual, it is on sale for 50% off right now as well to celebrate its release. This means you can pick it up for $3.99 off of the Google Play store.