Any followers of DroidGamers will be aware of the existence of this PC indie classic that is now available on android. There are plenty of these ‘bullet hell’ shooters available from the market, but has Beat Hazard Ultra got an ace up its sleeve that separates it from them all? Let’s find out shall we?

I will start by saying that this game does not have a storyline, fixed missions or a narrative of any kind. You select from four modes, pick your music, pick your difficulty and play. This is how all games of this type should be. All the levels are created by the music you own, pick a mellow song and low difficulty and enjoy a casual game while listening to your favourite track, pick a heavy song on hardcore and above and you will find a real challenge waiting for you. Four modes are available for you to do this. 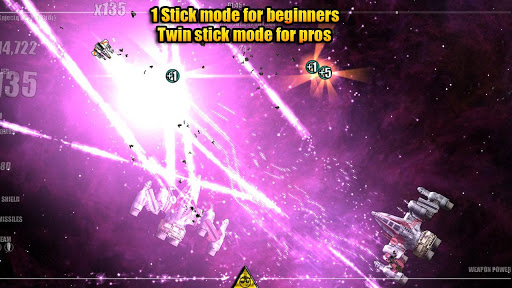 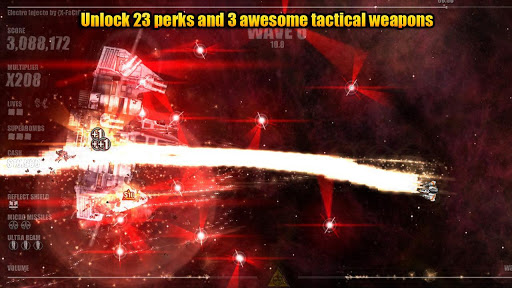 ‘Standard’ mode is a simple case of pick your song, your difficulty and shoot away until the song has finished. This is the best for all the casual gamers out there who want to kill just a few minutes. In ‘survival’ mode you pick the first song and you play until you run out of lives trying to rake up the biggest score as you go.

‘Boss Rush’ is a real treat. You have waves of bosses which are timed. This makes thing difficult as if you run out of time before you defeat the boss, the next boss is released and you have a real challenge facing you. I found this mode to be the most rewarding and fun. ‘Chill out’ mode is kind of a training mode where all weapons are unlocked, you have unlimited lives and you play until you are bored basically.

The 2 stick controls are great matching that of Pewpew, the range of enemy ships is huge and the boss battles are intense experiences, the graphics are bright, flashy and keep you on your toes. This game has arrived from PC with all the bells and whistles fully intact. Cold Beam Games could have just left it like this and the game would have been great, but instead they have added perks into the mix, along with achievements and the ability to play radio stations. 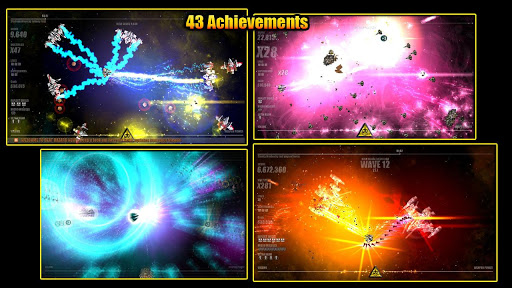 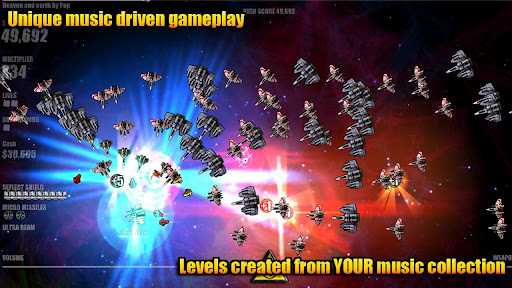 If I am going to be very fussy, I would say that the controls tend to have you covering the screen with your fingers so you may find yourself being killed because those pesky enemy ships went under your thumb to get to you, but this is a very small gripe. IAPs are present but they are done well. I have not spent a penny and I am now elite 3 and have unlocked most of the perks. If IAPs are the future, this is how I hope they are implemented on all games.

This game is not just another ‘bullet hell’ shooter; it’s a great in-depth beautifully presented shooter that is welcome on Android. If you have not played this yet, what are you waiting for? With a demo available, there is no reason not to have a go.