Nvidia has been working hard on their Android gaming themed device called the Shield since it was originally released for public consumption. Since the device’s launch, Nvidia has pumped out some pretty solid software updates to boost performance and stability with the Shield but today’s new OTA update brings some big changes that make the Shield even better.

This is the same update we talked about recently that would be bringing the game streaming support to the Shield. However that isn’t the only feature to arrive with this update.

One of the other big new features is Gamead Mapping which is pretty much one of the more important features for the device. Nvidia has taken a rather unique approach with this feature as well by allowing users to submit custom profiles for games that other users can download and use.

GamePad Mapper allows for players to download profile of controls that have been mapped out for Android games. Since this service allows people to create their own profiles and upload them for other people to use, that means if there is a game that doesn’t have controls mapped out for it and you happen to not want to take the time to create a profile, you can just download one instead.

Right now there is over 100 games with controls mapped out for them available for download and use the moment you get this OTA update.

If you’re lazy and don’t want to worry about downloading controls for games manually, there is an option to use an automatic updater that will automatically download controls either when they are updated or when new ones are available.

Another new and improved feature is the Apps-to-SD one which allows users to store games and applications on an SD Card instead of right on the device’s internal storage. As game size continues to increase with the console quality games coming out, the space these games take up can really get eaten up. This new feature allows for both .OBB and .APK files to be moved to SD Cards and used from there.

There are a few requirements for this feature though and it’s more of an Android thing than a Shield limitation:

– Only apps that the developer opted-in as moveable to external storage can be moved.
– SHIELD only supports writing to FAT32 formatted cards. This is a limitation of Android.
– 32GB cards (or lower) will need to be formatted FAT32. Most cards come pre-formatted FAT32, but for the few that aren’t, they will need to be formatted in a PC.
– At this time, 64GB cards (or higher) cannot be written to because they are either NTFS or exFAT formatted. Users can still read files, including music and movies, from their 64GB cards as long as they are NTFS formatted. exFAT is currently not supported on SHIELD.

As we mentioned in our previous article about this OTA update, another big feature that has arrived is local game streaming which marks the first step towards full cloud game streaming of PC games to the Shield. As the name of this feature suggest, if you have a newer GeForce GTX graphics card in your PC and have the GeForce Experience installed on that PC, you’ll be able to stream PC games locally to your Shield so you can play them using this device.

This is the first step toward pure cloud gaming of PC games on the Shield which is next on the plate for Nvidia’s GameStream Technology. Eventually it will be paired with Nvidia’s clod game streaming service called GRID which will allow you to play supported PC games anywhere at any time as long as you’re connected to the internet.

As for local streaming, you’ll be able to play games at 720p with 60 FPS (frames-per-second) over Wifi right now with this feature. You can also pair this feature up with Console Mode, connect the Shield to your HDTV and a Bluetooth controller and you’re all set to play PC gamers on any TV in your house. There’s over 50 PC games officially supported with this feature but unofficially there is plenty more. 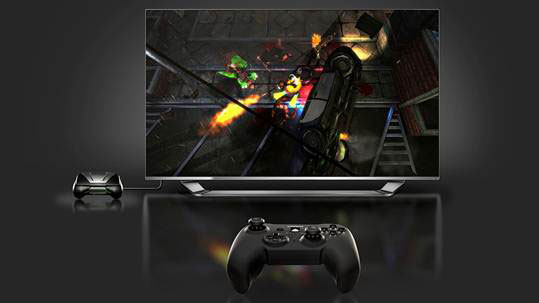 Top all of these new features off with the addition of Android 4.3 and you’ve got yourself a rather powerful and flexible Android-based gaming system for gaming on the go or at home. Without a doubt though the biggest features have to be the game streaming and gamepad mapping additions. However the total package this OTA has turned out to be is rather impressive.

Also don’t forget about the new deal that Nvidia is offering to celebrate the release of this rather massive OTA update. NVIDIA is offering up to $100 off the purchase of a SHIELD plus free copies of Assassin’s Creed IV: Black Flag, Splinter Cell Blacklist and Batman: Arkham Origins when you buy select GeForce GTX graphics cards.

So for the deal itself, here is how the discount will break down: