Star Wars: Commander Review – Not a bad game at all, but not great either

“There has been an awakening. Have you felt it?” these words in the teaser trailer for Star Wars: The Force Awakens sent shivers down my spine, for the first time since 2005 I was seeing live action Star Wars footage. After a few more viewings of the 88 seconds of bliss, I was reminded that I was planning on reviewing a Star Wars Game for DroidGamers, Star Wars Commander.

Star Wars Commander has been accused by many of being another Clash of Clans knock-off. I have never played that game though and even if I had I want to look at Commander for what is is, not what it may be similar to. Commander is based around the idea of running a base, either under the Empire or the Rebel Alliance. Whichever you choose will change the tools given, for example only the Empire has control of AT-ATs.

Bases feature components that all serve a purpose. There are different items to place that earn you money and resources, and barracks can be improved to unlock more troops. Everything is upgradeable, but it takes a long time which was my problem with the game that I’ll touch on later. Besides building up troops to deploy, you want to take measures to defend your base. Thankfully walls and turrets can be placed for the price of in-game money. 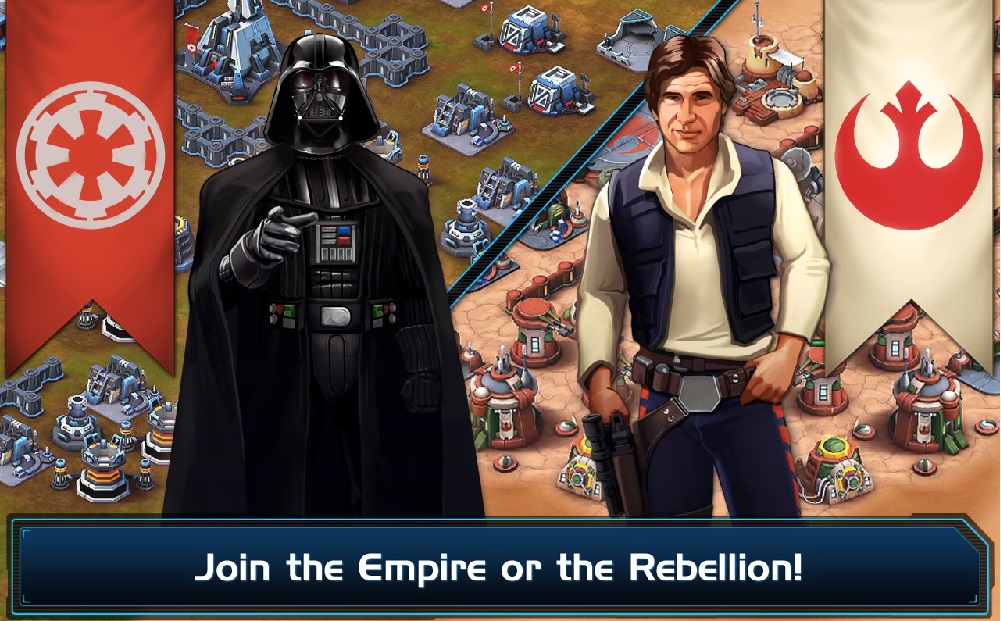 Controls are simple. Whether you are adding turrets, or placing troopers you simply tap to select then tap where to place them. Battles are not very interactive beyond where you first place troops. You can not direct them where to go, you just pick the best place to deploy them.

As far as free-to-play games go, I’m not a fan of the freemium model many mobile games take, and I refused to spend money so I wasn’t able to play through a lot of of the game. While it is possible to play without paying, it makes it a much slower process. With in-app purchases, you can buy crystals, which allow you to unlock items in a shorter amount of time or for less in-game resources.

The story is bland, and doesn’t do anything for me as a fan of the Star Wars universe. The rebels stories starts you out on Tatooine and you attack Tusken Raiders (Sand People), who obviously retaliate. The story is made to serve the game. Its nice that characters like Chewbacca, Han and Leia are in it but again this is not to be played if you are simply looking for more Star Wars stories. Those characters can be used in battles and are very powerful, but without proper defense from other troops, will be taken out shortly.

Visually speaking the game is not as nice to look at as its source material, it all looks really what you would expect a typical mobile game to look like, and I feel Star Wars can be better than that. Since the game doesn’t offer an interesting story, and its gameplay is simple and not too deep, and upgrades take a long time to happen I only recommend playing this if you plan on playing in short bursts over a long period of time. I plan on continuing to play the game, but it is disappointing that there are no options to allow me to play Star Wars how I’m used to it, in longer sessions. That’s a complain I generally have about current Star  Wars Android games, they would be better served as premium games, pay a few bucks and have a game to dedicate some time into.