Gemini Rue Review: Excellence in just about every way

Wadget Eye Games specializes in point-and-click mystery games that are designed with a retro look that’s heavily pixelated, great (albeit short) story telling, and live voice acting. I’ve played a few of their games, like the Blackwell legacy and The Shivah, so I was familiar with their style of gameplay. Happily, I found Gemini Rue to be the best one of theirs yet, that I’ve played.

The setting for Gemini Rue is one of a dystopian future where drugs addiction is rampant, and its distribution is facilitated by an organized criminal enterprise. Players assume the role of Azriel Odin, a reformed assassin in search of his missing brother Daniel. The locale is a planet within the Gemini system, where it rains all the time and is generally a miserable place to be but makes for a great backdrop. Players will converse with other  NPCs (some friendly, others not so much) in their attempt to navigate their way to finding Daniel. Interestingly enough, that’s not the only story played in this game. There is a second story with with a second protagonist that players also attempt t to solve. In this second story, players assume the role of Delta Six, a “patient” that has unsuccessfully attempted to escape a rehab facility that wipes memories. As players play through Gemini Rue, the story alternates between one thread and the other, with an ending that explains how the two fit together, and quite nicely at that. 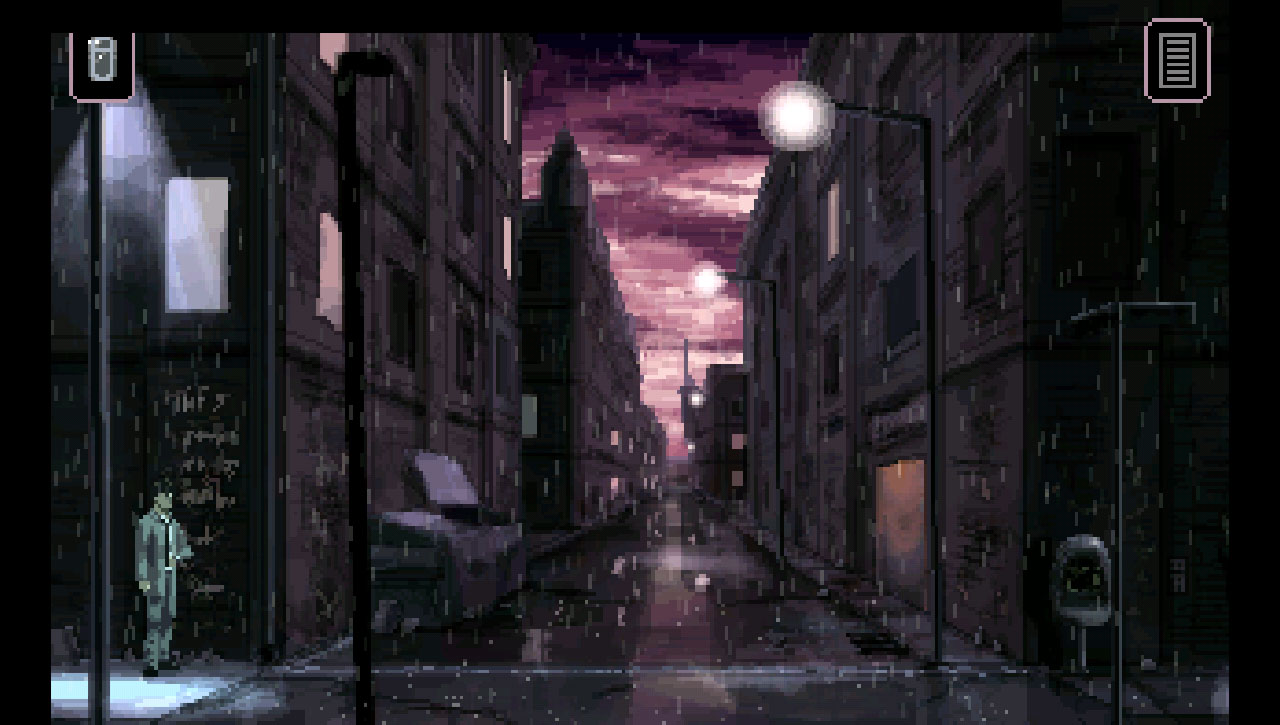 Like other games released by Wadget Eye, this is a point-and-click style mystery. In this game, tapping on objects or people you wish to interact with will bring up a popup box containing your options (look, manual manipulation, speech, and use of feet; think climbing or kicking with that last one). Any objects in that character’s list will also show up at that time. Dialogue is accomplished by selecting a choice when they’re presented, as is often the case in RPG and other story driven games. Players can call up their “smartphone” to initiate calls or review notes, located in the upper left corner of screen for Azriel.

The save/load screen, which also functions as a pause for the game, is available for both protagonists, with no apparent limit to how many save files a player makes. These options work at any time where dialogue isn’t happening. Every character that you interact with has a profile picture show up when in dialogue, as well as a voice actor/actress, the quality of which is excellent. Their use of soundtrack in the game was sparing, but had a movie-like feel on the rare occasion it was implemented. 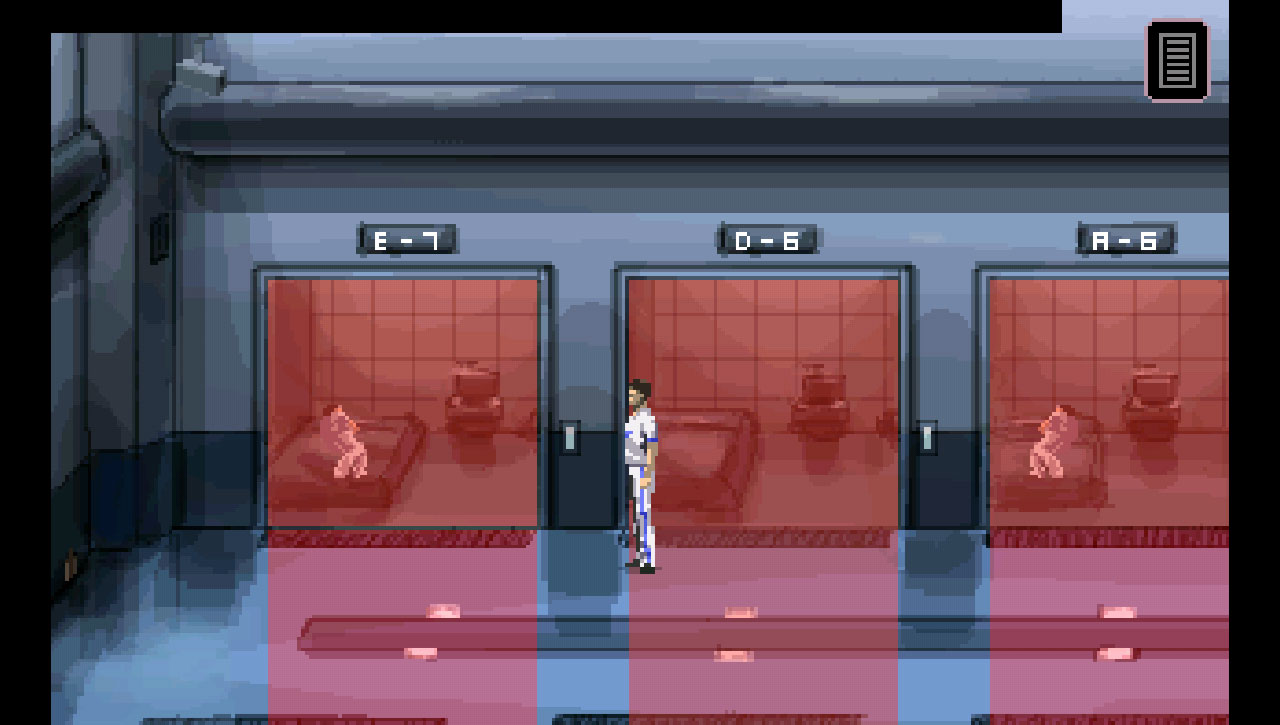 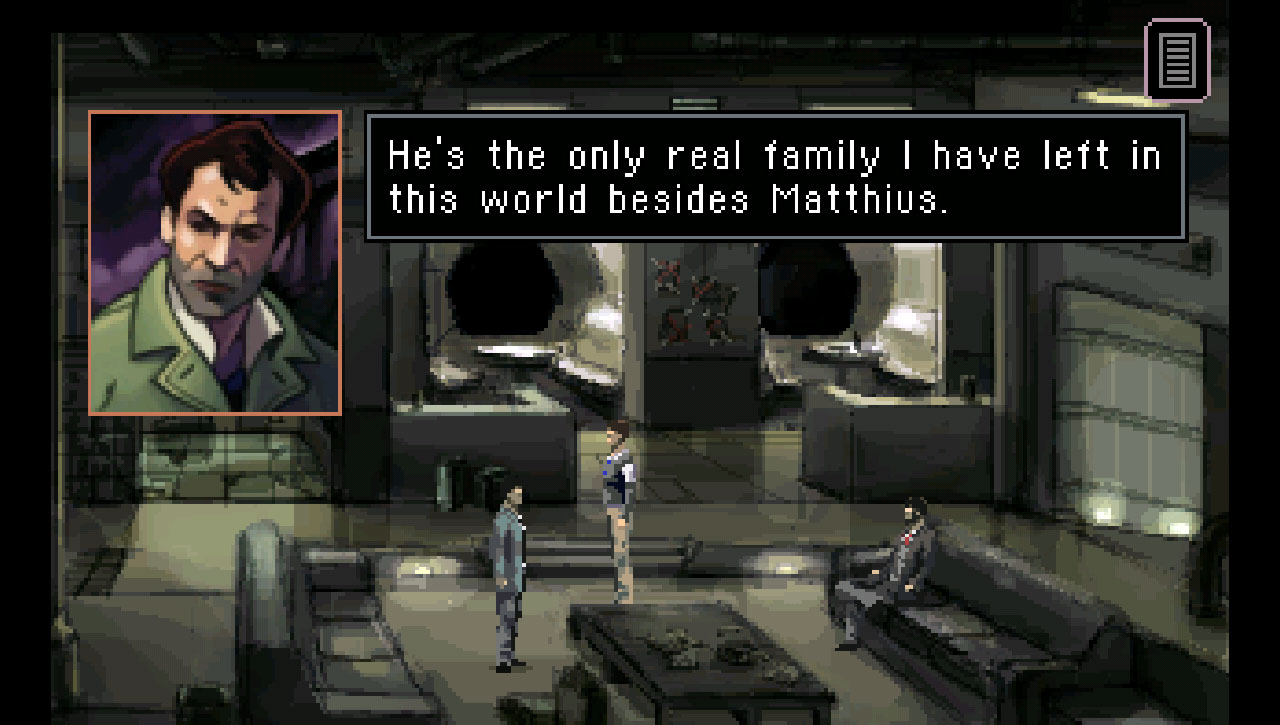 Unlike the other games by Wadget Eye that I’ve played, this differs from those in two ways that were improvements for me. First, the game was longer. The others I’ve played by Wadget Eye were very short, and could be completed with little or no help in around 60 to 90 minutes. This game to significantly longer. While it is no saga that could be compared to Fallout or some other game of incredible length, this is definitely a step forward for them. Their stories are consistently great, so longer is better as I’ve felt the fun ended too soon with previous releases.

Secondly, the amount of action was ratcheted up well, compared to some of their earlier releases. There are multiple gun fights in this game, whereas there are little or none in the others I’ve played, and I found that to also be a great addition. Each instance fit the story, and even a cover-system for avoiding gunfire is implemented, as well as giving players the option of leaning out one side or the other from cover, to fire at opponents. While the button presses to navigate the armed conflicts felt a bit cumbersome to really nail down, it wasn’t enough to take me out of the experience. And that’s the closest thing I have to a complaint, and the only one at that.

Gemini Rue, in short, is a great game. The story was a blast from the start to finish. The puzzles were clever. The setting sucked me in. Unless you despise point and click, there’s no reason not to get and enjoy this game.