Square Enix released the transcript from their financial results briefing as well as their planning for the 2016 Fiscal Year and there were some interesting tidbits to be found in there. Square Enix has done well for themselves so far this year apparently across all platforms, those being PC, console and mobile. In fact, according to CEO Yosuke Matsuda, games for smart devices did quite well.

After all the big numbers have been talked about, the meeting turned to the future plans for Square Enix in regards to next year. In short form, the plan for Square Enix is to reboot and strengthen their current IPs, continue to work on new IPs that they apparently have underway already, and to collaborate with partners to bring some of these IPs to life since Square Enix can’t do it all themselves, or at least they can’t take full advantage of their catalog of IPs on their own. It’s a three-step system that the company outlined in its meeting. 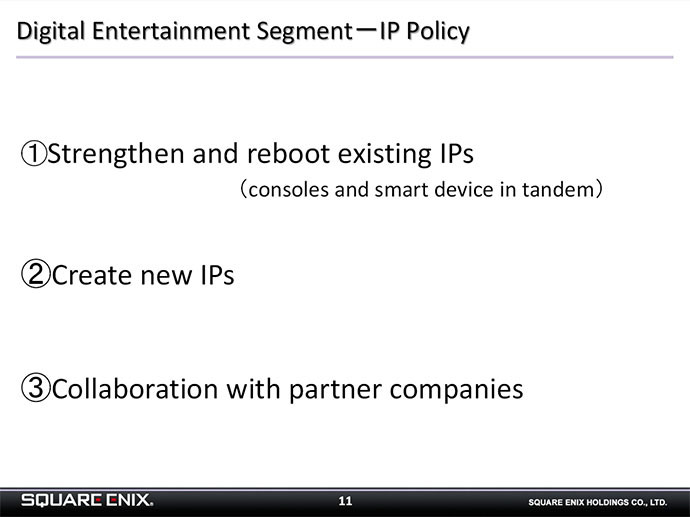 First is to strengthen and reboot our existing IPs. We would like to focus on how to utilize the numerous assets of content that we have nurtured so far, and apply them to the latest trend. As for the platform, we would like to use consoles and smart devices in parallel. Just focusing on one platform is not enough. We believe it is significant to serve both platforms, if we are to offer game content and services that appeal to the new generation.

The second policy is to create new IPs. I cannot disclose much at this moment, but we are working on various initiatives, including some experimental projects. So far, we have created IPs for a wide range of platforms, including consoles, smart devices, PCs and publication. Based on this strength, we will actively work on creating new IPs in FY2016/3.

The third IP policy is to collaborate with partner companies. With so much changes going on in the market, we will suffer a big opportunity loss if we try to do everything all by ourselves. Through collaboration, we will utilize the strengths of other companies which we ourselves lack, and grow the size of the business. A good example is “DRAGON QUEST HEROES,” So far, we had not worked on a full-scale action RPG. However, we were able to create a new style for “DRAGON QUEST” through collaboration with Koei Tecmo Games.

Another interesting point is that Square Enix wants to be more of a platform essentially. The company wants to use consoles and smart devices in parallel more. Unfortunately this point isn’t elaborated on more but Square Enix has done a few interesting things in the past. This could be more companion apps for their console titles for smartphone and tablet owners to use. It could also be cross-platform games or second-screen features. The company has even brought Final Fantasy XIII to mobile recently in Japan but using a gaming-on-demand type of feature for it. 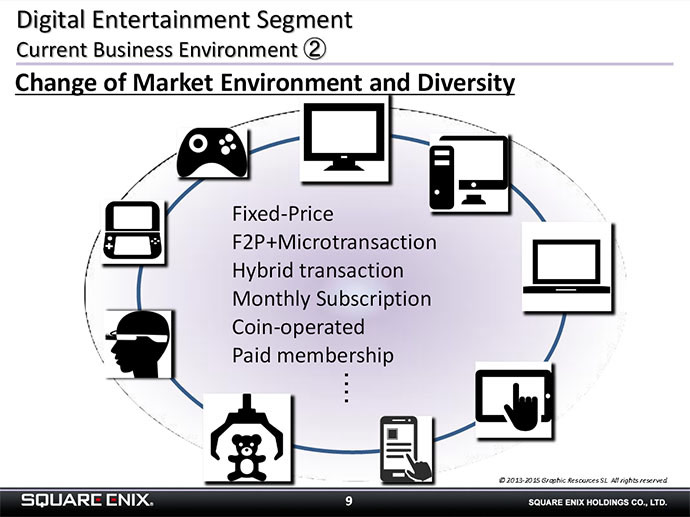 As for the new IPs, Square Enix doesn’t mention any of their names, although today’s news about Alice Order certainly fits into this category, which we will be posting on shortly. Both AR (Augmented Reality) and VR (Virtual Reality) were brought up during the meeting and while nothing was announced for either platform, Square Enix did say they are monitoring both “with great interest, and considering various initiatives”.

So it looks like we can expect some interesting things to come from Square Enix this year as well as the next. If you want to read the transcript, it isn’t as long as you may think and it does make for a pretty interesting read.