Lately Com2uS seems to have been doing rather well for themselves with some of their most recent releases like East Legend and Dragon Blaze. However some of their older titles are still going strong as well, especially Summoner Wars. The company’s earning for Q2 2015 certainly show this as well, with growth in the positives across the board.

Com2us displayed steady growth in overseas markets this quarter, thanks to an aggressive Summoners War branding push in the US, Europe and other emerging markets. The company recorded 88,269 million KRW in overseas sales, marking a growth of 203% YoY and accounting for 82% of total revenue. The company credits established titles Summoners War, Ace Fishing and Golf Star for its continued growth. The collective success of these titles has paved the way for Com2us to become a trusted name in the mobile game industry.

We have talked about this year’s line-up from Com2uS in regards to mobile gaming. The interesting part is that we have seen the company’s planned line-up for the rest of this year back during GDC 2015, and all of their planned RPG titles have been released. However, it states in the earning report that they are planning to release more RPG titles this year as well as updates some of their sports games. 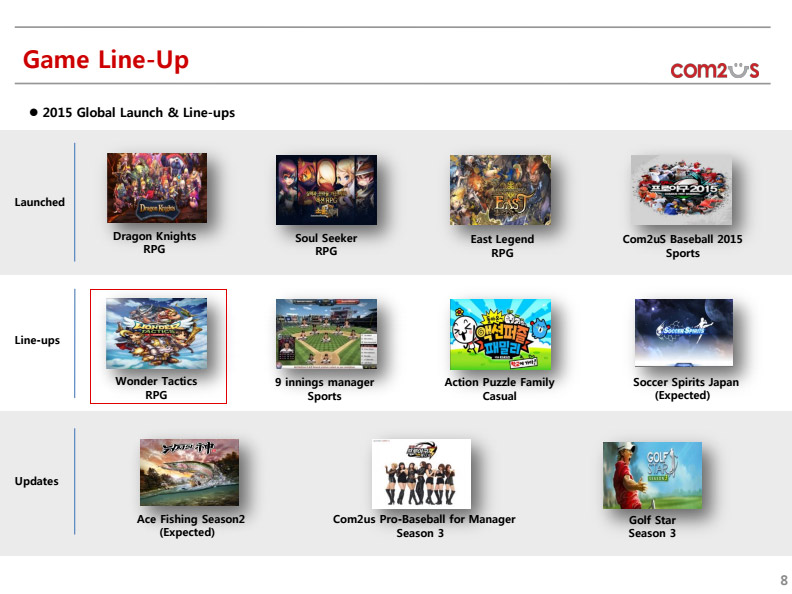 Com2us will be launching more RPG titles as a follow-up to its success with Summoners War, along with several updates to existing popular sports games through the rest of the year.

So it appears Com2Us have something up their sleeves in regards to future RPG releases. Whether the above quote is referring to an actual sequel to Summoner Wars, or just games that will ride off of Summoner Wars’ success, we don’t know, but an actual sequel would be pretty great. We did spot one new game added to their line-up in the RPG category called Wonder Tactics. While we have no details at all yet about that game, we can guess from the title that it is a tactical-style RPG.

We will post an update once we get more details about Wonder Tactics, or anything else for that matter.