The Nexus 6P and its full metal body comes in at 7.3mm thick with a 5.7″ screen. Powering the device is the Snapdragon 808 64-bit processor which is teamed up with the new Adreno 418 GPU. It will also come with the new type of USB charging (USB Type-C), allowing a full charge to happen but in half the time. There also are two front-facing stereo speakers, a 8MP front-facing camera, and an even better 12.3MP rear camera. The rear camera is apparently the best one to be included in a Nexus device to date. The Nexus 6P will also come with Nexus Imprint on the back. 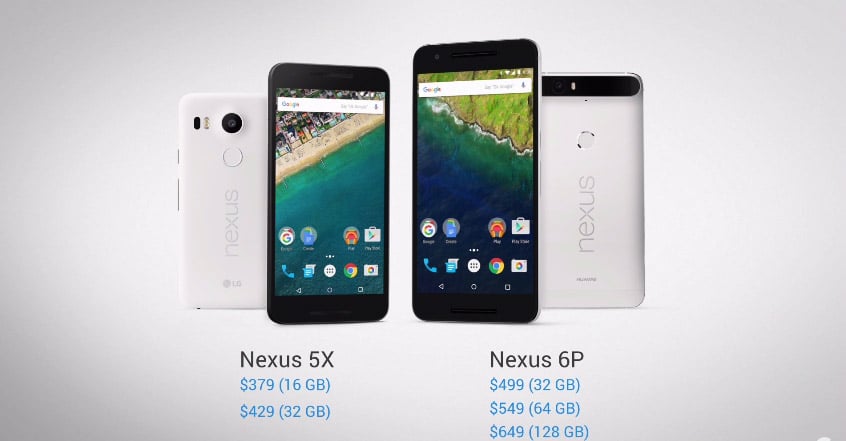 In regards to the Nexus 5X from LG, this is a slightly smaller phone but with pretty much the same hardware as the Nexus 6P. The Nexus 5X also comes with the Snapdragon 808 64-bit process and Adreno 418 GPU combo, but has a 5.2″ display instead. It also has an improved battery, coming in at 2700 Mha, the same improved rear-facing camera, and the same fast charging as the Nexus 6P.

The Nexus 5X is also available in three colors with fancy names. In reality they too are white, off white and grey. There will only be two storage size options however for the Nexus 5X, which are 32GB and 64GB. Pricing for this phone is $379 for the 32GB and $429 for the 64GB.

Both phones also share some additional features as well. This includes both phones coming unlocked, so you can pick what carrier you want to use them on. Each phone will also come with the latest Android version as well. Both will also give you a 90-day Google Music free trial and $50 Google Play credit. 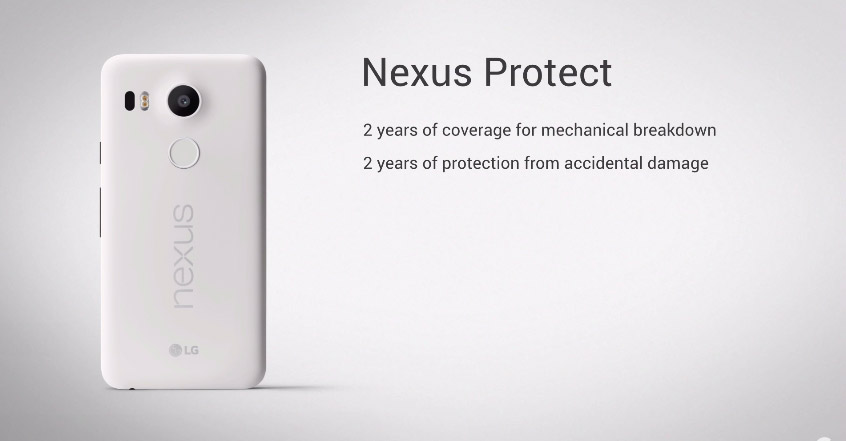 While each phone also has a 1-year warranty, both will also have the ability to be signed up for Google’s new Nexus Protect program, which offers an additional year of protection over the warranty. This means you now have 2 years of mechanical failure protection as well as accidental damage protection. For the Nexus 6P, this will cost you $89 extra while the Nexus 5X will run you $69 for the extra protection.

For those of you who are a part of Google’s Project Fi, both phones are compatible with this service as well. Both the Nexus 6P and Nexus 5X are available for pre-order today over on the Google Store and will be shipping out later this month. Availability starts in US, UK, Ireland and Japan before the rest of the world gets these phones in the near future.