For those of you who are not really familiar with this particular headset still, HTC jumped into the Virtual Reality game not too long after the Oculus Rift and the Samsung Gear VR. HTC teamed up with Valve to incorporate their Steam platform into the package as well. From what we have experienced hands-on so far, the Vive is actually quite good. 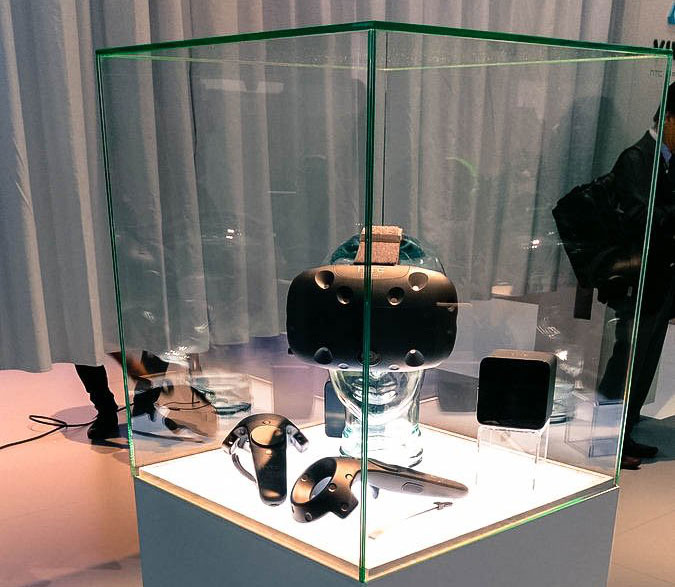 The whole package will be going like for pre-orders and will include the headset, room scale movement sensors, and an HMD featuring a built in camera and phone, as well as two of the grip controllers which you will use for anything related to hand movements. There is some good news as well about pricing. You may remember a month or so back when the rumored price for the HTC Vive got leaked out? Well that price was wrong, and by a lot. Pre-orders will be running $799 instead of the $1500 rumored price. It is still up there in price, but it is a lot better than the $1500 rumored price tag.

If you pre-order one of these packages, you’ll also get two full VR games right away: Job Simulator: The 2050 Archives by Owlchemy Labs and Fantastic Contraption. The first game takes place in a sly, humorous, tongue-in-cheek world where robots have replaced all human jobs, and you will be stepping into a job simulator to learn what it was like ‘to job’. Fantastic Contraption Imagine will have you walking around a grassy island floating in the sky, building a machine the size of a horse with your own hands, and then watching it roll out into the world.

Pre-orders will become available in just over 6 days. HTC has a countdown going on the Vive website which you can keep track of if you’re planning to snag one of these pre-orders when they go live, which will be on February 29th, 2016.