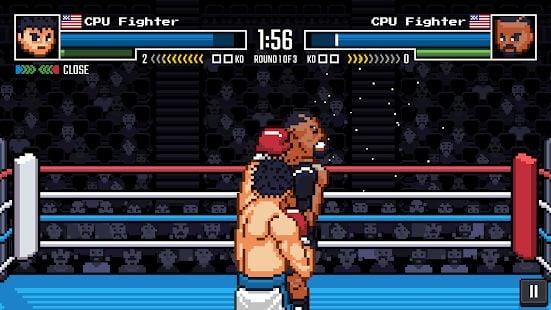 This week’s list of the best new Android games really packs a punch.

That’s a corny joke exploiting the fact that the list includes a boxing game – the marvellous Prizefighters 2. But it’s also true, since the absolutely sensational KOTOR II came out this week, giving you hours of Star Wars RPG to explore.

Also check out SplitFire!, a fab-looking same-device multiplayer game. Sure, you may have to play it with your dad for now, but when the pandemic ends you’ll have a blast with it.

Full name: Star Wars Knights of the Old Republic II: The Sith Lords. This ambitious RPG sequel first came out in 2004, a year after its predecessor, and to similar levels of acclaim. Like every Star Wars middle child, it’s darker than what came before, depicting the struggle of a sundered Jedi Order against the Sith, who are riding high on a wave of evil.

Prizefighters is a real gem of a sports game, concealing a deep, balanced, and intuitive fight system beneath its innocent-looking ’80s-era exterior. And Prizefighters 2 is absolutely everything a sequel should be, with expanded fighting controls and a deep career system that sees you taking on an avenging protege after you retire.

Timing is everything, and SplitFire! doesn’t have it. This stylish-looking same-device split-screen multiplayer game sees you and a sweaty, huffing human opponent clutching a phone at either end as you spend 30 seconds scrambling to arm yourself before joining battle. It’s a fab idea, beautifully executed – it’s just a shame you can only play it with your sister right now.

It’s been heading our way for a while, and now it’s here. The latest product of the fertile Marvel universe is a 3v3 MOBA in which you can battle various Marvel characters, of which there is no shortage. You can customise your heroes, too, just in case Spidey’s costume color choices aren’t to your taste.

Guess what: Hot Wheels Open World is a Hot Wheels game that takes place in an open world. Sometimes the title does all the work for you. The game boasts a huge roster of 80 vehicles, with more likely to join them later. Apparently, you’ll also find “one of the largest drivable tracks” here. Just don’t go looking for it on the Play Store. It’s a Roblox game.

For the second week in a row, Square Enix has deeply discounted a game from the SaGa series. This time, Romancing SaGa 2 is getting the bargain bin treatment, though, at $8.99, it remains relatively expensive. Gameplay-wise, Romancing SaGa 2 is an interesting RPG that sees you running an empire across multiple generations.