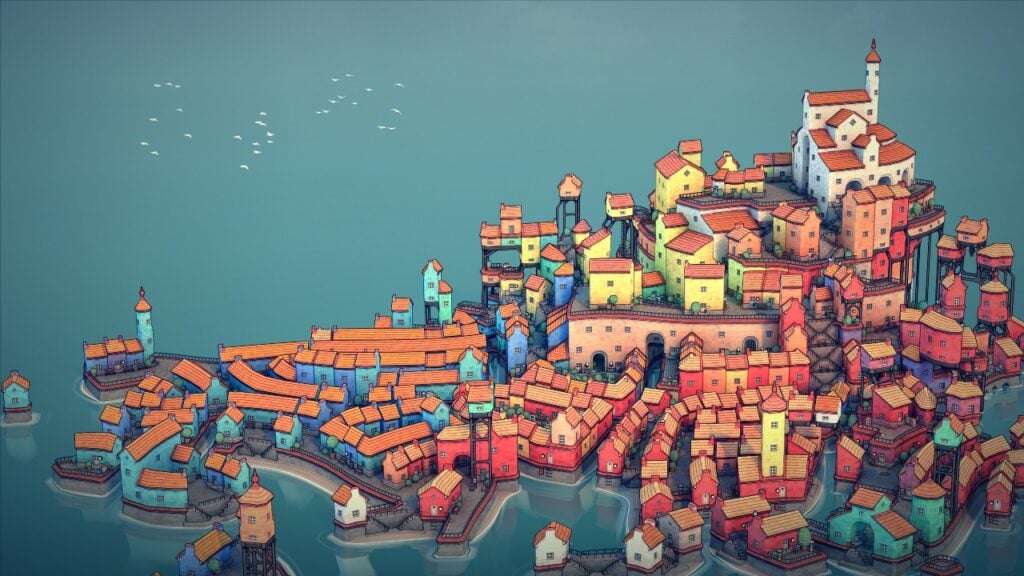 Casual is a pretty elastic definition. The case could be made for thousands of games to appear on this list, and at the same time you could argue that all of the games in this list belong in other lists. Taxonomy is hard.

We’ve kept it brief and, we hope, relatively uncontroversial. We’ve also deliberately ignored the new mutant genre of hyper-casual games, because those aren’t the games we tend to cover on Droid Gamers.

You guys are far too discerning.

Welcome to Townscaper. In this relaxing game, you won’t have to worry about missions, achievements or even about failing the game. Instead, you’ll be curiously exploring the unique building system.

The building mechanics have been described by fans as being the most intelligent in any mobile game, and by the developer as “more of a toy than a game”. Build to your hearts desire, as you learn how to build cathedrals, hamlets, houses, and even canal networks, among a plethora of other buildings.

An irregular grid is used as a foundation for you to place coloured blocks on. Townscaper will help you out, as the game connects the dots for you. Give the game a shot if building is your thing!

Another building game! Who knew creating cities would be such a casual thing to do?

Pocket City takes what’s great about city building games and scales it right down for a casual tone and audience. Despite this, there’s still a disasters feature, which will allow you to see how well your city will stand up in a disaster. Among this are other mini-features and events, providing plenty of content.

Once purchased, the game has no micro-transactions, which is honestly just a bonus.

Build homes for your citizens, create recreational zones for them, respond to crime, and more in this modern city builder.

Railbound is a unique little puzzle-solving casual game, where the main goal is to see that two dogs are safely transported to their destination by rail. We’ve put this puzzle game down as casual due to the playful nature of the game. While you’ll feel a sense of achievement when you succeed, you can’t help but laugh at yourself and with the game when it all comes apart!

The concept alone is quite bizarre, but solving the 150 puzzles along your journey will take your mind off that. The game doesn’t take itself too seriously, which is exactly what we’re looking for!

Fishing Life was created with the intentions of gently distracting you from the worries of everyday life, and it succeeds brilliantly. Styled with pleasing, minamilstic 2D art, you’ll quietly fish in a small wooden boat whilst listening to the waves gently pass you by. Upgrade your gear, travel to different spots in the water, and enjoy a sunset as you fish your worries away.

While the game came out in 2019, it’s still getting updates to this day. That reason, in combination with how simplistic and lovely it is, is why we’ve included it on this list.

Another easy, kicked back game that revolves around the good life. In Stardew Valley, you’ll spend your time fishing (again), farming, and exploring a comfortable rural location. The game is a farming RPG at heart, but there’s hours of content that you can get out of the game. On your journey, you’ll even make friends with neighbouring farmers!

The game is an Android adaption of the PC/console game of the same name, and the Android version is slowly but surely creeping up on them.