DG) How far along are you in the development of Runes?

Faeria Studio) The project started late 2008, with the idea of being a magician with a magic wand on a Wii project. But with the smart phones Android announced, we decided to turn to Android because it would be simpler, massively multiplayer and most of all, Android’s philosophy matches ours.

So we started the Game Design in December 2008, with other projects running, only a small team worked on Rūnes, so we had to wait until June 2009 to really start the project.

In July 2009, we hear about the first Android Developer Challenge, we then rushed to have a playable alpha in august. That was the first release of Rūnes: august 31st 2009.

But we had a lot of issues with our 3D engine, so the project got late. Actually, most of the features are implemented, but we still have the alpha engine and are working on the new one.

DG) Last I heard, you were upgrading the graphics engine of the game. How has that been coming along? And, can you maybe share a picture that shows how it was, and how it will be when the game is going live?

Faeria Studio) To create from scratch a 3D engine for Android is really, really difficult. We have a lot of memory issues, and the fragmentation of Android phones makes it really difficult to create a technology that will work on every Android…

Our main feeling about Rūnes is: small platform doesn’t mean small games. We want to prove that Android is great for gaming, so we need the best in our game. We have a lot of features, a great universe so we need great graphics. That point is the hardest and is still unsolved. But we look for the best, that’s why we have created one of the firsts cinematic for an Android game.

But we have good news! New characters have been designed, and are waiting for the engine to be implemented.

The engine we work on can almost handle graphics of the quality of the teaser!

Here is a shot of the model history: 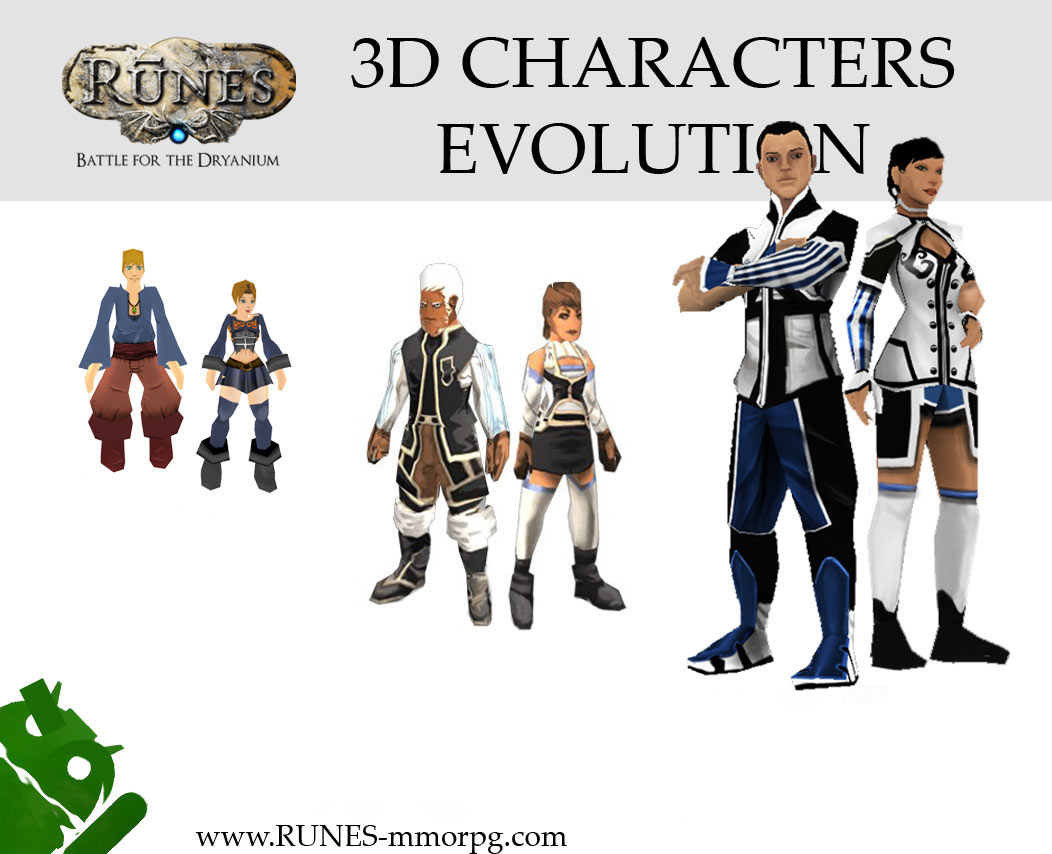 DG) Will Runes be Freemium with in-game purchases? If so, what can we expect to be sold?

Faeria Studio) We want Runes to be Free-to-Play. We think that players who like the game are responsible enough to support it. That’s why you will find some in-app purchase in Rūnes. But the game needs to be fair, so you will only buy services, not gold or killer stuff…

The best players won’t be those who spent the most money in Rūnes. In fact, you will have services such as: another character, larger backpack, ability to travel faster, unique dungeons, unique skins…

DG) What do you think will separate you from other MMORPGs currently on the Android Market? The gesture/drawing system to cast spells? Tell our readers about the spell casting as well as anything else you feel will help you stand out from the rest.

Faeria Studio) The first answer is very simple: we have an innovating gameplay and innovating features that you won’t even have in MMORPG on PC:

Permadeath: your character can die permanently.

Non static environment: the universe changes so you won’t eternally find the same monster/object/npc at the same place telling you the same thing.

Non-scripted: the scenario will be created by players through the evolution of the factions (having a scenario is almost a feature ^^).

No super-mega NPC: As the scenario will progress, the NPCs will be replaced by players. In fact the entire game will be ran up by the players who will make it to the Mage’s Concil.

But the most important is the core game: the Runes.

Magic is sealed from reality, to access it, you have to use keys. By drawing a rune, you open a door to a specific kind of magic (Fire, thunder, life…) and by mixing different magics, you will create spells.

As a mage, you have to cast spells so you need to draw runes. And to draw them, just use your finger on the screen of your Android. It’s that simple!

DG) Are you guys looking for more testers? If so, where can out readers sign up to help?

Faeria Studio) We always look for testers (we are about 7000!) because we have to discover all the bugs in the game and we want to be sure that our servers will be strong enough when Rūnes will be released.

You can download Runes here and here and you can register on the website or directly in Rūnes!

DG) How many spells ( Runes ) are there currently in the game?

Faeria Studio) For now, there are 20 runes and 57 spells. Spells will be enhanced soon in order to have up to 70 spells.

DG) When do you expect to launch Runes on the Android Market?

Faeria Studio) The main problem is the 3D engine. The game is almost finished, but we really want to launch Rūnes with the best graphics we can, I can’t tell when the work will be over, but we have new partners to help us! There will be news about it in February.

DG) What type of hardware are you aiming for as a requirement to be able to play?

Faeria Studio) We want all android users to play Rūnes. The game will be scalable to most of resolution and works on Android Tablets! The main problem is for old Android OS, we are compatible with 1.6 and higher, but it won’t last forever…

DG) What type of Mages do you, the developers, mostly play?

Faeria Studio) We play all kind of mages, but I think Earth Magi are the most played. They really have killer spells but with the arrival of the new spells, Rūnes will be more balanced…

DG) Tell us about Faeria Studio. How was it formed? How many people have been hired on?

Faeria Studio) Faeria.Studio was created in 2006 in order to promote roleplaying through MMOs. In the first years we worked a lot to create a gigantic universe where our games could settle. Then we started a PC MMORPG but the task was really too hard for a little indie team. We had created the basics of Runes (same universe), and we thought about creating a game simpler than a huge MMORPG. That’s how the idea of Rūnes was born in 2008.

It was a great challenge, and most people told we were crazy to start a 3D MMORPG on Android for, in 2008, just a few people believed in this project.

To ensure the realization of Rūnes, Tiki Move joined the project to handle the coding part.

With Tiki Move and Faeria, more than 50 people worked on Rūnes, and we have been 25 workers at the same time when the project was at its top. At the moment we are 6 persons dedicated to Rūnes.

DG) Has there been any funny bugs that popped up during the testing or things that you will remember that have stood out?

Faeria Studio) This one isn’t funny, but everyone who creates a game should be interested. When our ergonomist organized our first play-test we were stunned to discover that players used neither the character menu nor the map. In fact they were just playing 5% of Rūnes. We understood then that our interface was totally wrong. It took us almost two months to create a brand new interface… But it really was worth it!

We had so much bugs and glitches, but the funniest were translation issues. At the beginning of the project, we didn’t have any translator from French to English. So the game was full of engrish: vegetable drain instead of vegetal drain…

It made us create the Corrector Squad: an elite task force of testers who hunt every mistake. They do a great job! By the way, we have a great community and players are very kind with us despite all the bugs. We have worked as GM on several MMORPGs, but we have never seen such great players!

DG) If people want to get to know more about Runes, where can we send them?

Faeria Studio) You have Facebook, the Website and the Forum. We didn’t post news for a long time, but February will be a busy month, new release and…

In October we told a few players that something new is planned for 2011 on Android.

We give you a clue: we work on a new Android project! We will post news about thisproject on Rūnes’ website as soon as possible!

We would like to thank Faeria Studio for taking the time out of their busy work days to talk to us, these guys have been working hard on this game for a very long time already! Keep an eye on these guys and Runes and also we will be seeing them in the upcoming AGC #2 tournament!