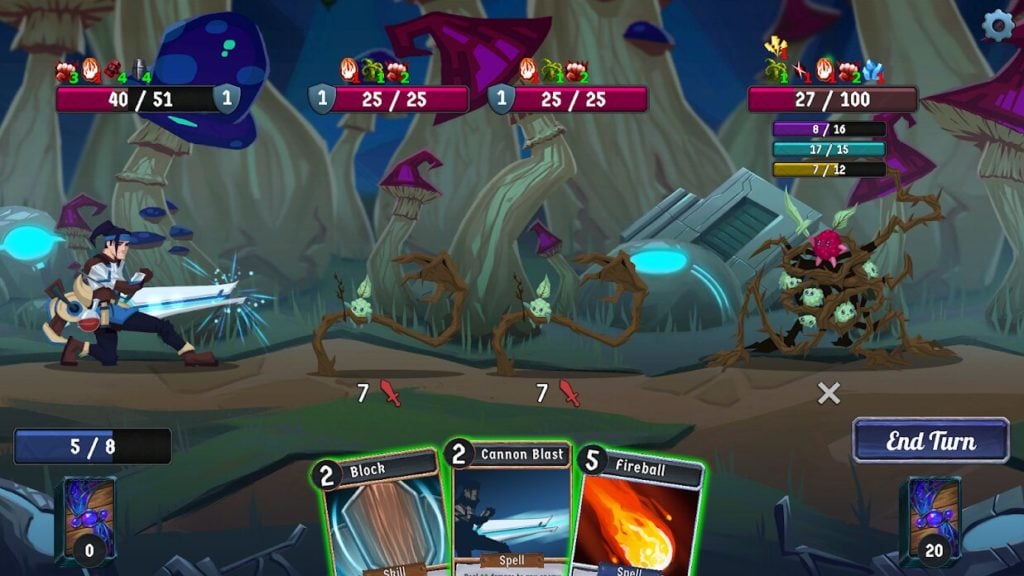 It is, quite frankly, an absolute travesty that you can play Slay the Spire on iOS and not on Android. If you’re not familiar with the game it’s a card-based roguelike with some awesome ideas and an addictive central mechanic that keeps dragging you back in. So yeah, boo that you can’t play it on Android. But yay because there are plenty of games like it that you can have a crack at.

(Update – our brains do not work when it’s too hot. You absolutely CAN play Slay the Spire on Android – here’s a download link. Thanks to everyone who pointed this out in the comments. We’re going to sit in the corner and hang our heads in shame)

And we’ve picked ten of them to share with you in this list. These are games that use similar mechanics, ideas or concepts, or that capture something of the spirit of Slay the Spire. Most of them have cards in them, for example.

We’ve run the gamut here, with premium and free to play games, so we reckon there’s going to be something for everyone here. You can click on the names of the game to download them from the Google Play Store. Right then, we think that covers everything, so let’s get on with it – here are the ten best games like Slay the Spire for Android.

It doesn’t have the complexity of Slay the Spire, but it does distill the dungeon crawl down to a deck of cards, and it is a lot of fun. Card Thief and Miracle Merchant, from the same developer, are both also well worth checking out. The game is free with IAP to unlock some extra content.

This one sees you building a deck of cards to take down a dungeon. It expands on the original’s ideas and adds a couple of extra layers of depth. It’s smart, it’s fun and it’s packed full of replayability. Krumit’s Tale is a premium app and it’s well worth the admission price.

A brilliant mix of an RPG and a deck-builder. There are different levels to fight through, different characters to play as and loads more. This is the sort of game it’s easy to lose hours of your life to. You can pick up the game for a one off purchase price – no IAPs or ads here.

Work your way through a series of randomly generated, card-based dungeons, killing monsters and collecting loot. The game is the perfect size for quick-fire gameplay sessions and you might accidentally find yourself playing it for hours. It’s free, with a one-off IAP to get rid of the ads.

It’s fair to say that Breach Wanderers owes more than a few debts to Slay the Spire. It follows a similar system, adding a few tweaks to make things a bit more unique. It’s currently in early access, so it might have a few borps to it. You can grab it for free, and there’s an IAP to unlock the full version.

An RPG built around the mechanics of Gwent. The story here is awesome, and well worth the entrance price alone. The card-mechanics are also pretty darn awesome. Make your choices, meet interesting characters, have an awesome time. The first chunk of the game is free and you can unlock the rest with an IAP.

A slightly more standard card game with some fantasy elements thrown in to keep things fresh. It’s a lot more than you might think at first glance and a really fun way to while away a few hours. You can play for free and unlock some more content with IAPs.

Another game that borrows heavily from Slay the Spire. There are a load of different cards to collect, plenty of monsters and bosses to kill and a lot more going on as well. It’s free to play, with IAPs to buy in-game items and get rid of the ads.

This one’s more of a strategy game than an RPG, but you’re still building up a deck to take on your opponents. There’s single and multiplayer components and it’s deep enough to keep you engaged for a long while. The game is free to play with IAP.

Knights of the Card Table

Almost certainly the funniest game on this list. Knights of the Card Table sees you bashing monsters, buying equipment and rolling dice. It’s not as layered as Slay the Spire, but you’re still going to find a lot to love here. The game is free to download and it features IAP.

For more lists of the best games for Android, click right here