Update: January 18th, 2016 7:04am PST: Just as a quick heads up, Jason did respond to our email and rather quickly at that, within an hour. So the prize has been claimed! We have another bad ass giveaway like this coming up shortly!

Update: January 15th, 2016 1:18pm PST: It is time to announce the winner for this giveaway. The randomly selected winner is Jason Ricker! Congrats to Jason. We will be emailing him and he will have 48hrs to respond back to our email in order to claim his prize. If we do not get a response in 48hrs, we will pick another winner. So don’t run off! We will also be doing another giveaway shortly just like this one, so stay tuned!

We have partnered up with Nvidia to give away a 500GB Nvidia Shield Android TV unit as well as a Metal Gear Solid: Revengeance replica sword, which is actually pretty big and awesome in its own right. Like all of our giveaways, this one is open to pretty much everyone and you really don’t have to do anything special other than the things in the giveaway widget below to earn entries.

This giveaway is for two prizes in total, that one winner will receive. The first prize is for the 500GB version of the Shield Android TV unit from Nvidia. By now everyone should be pretty familiar with what the Shield Android TV is. This version has an upgraded storage containing 500GB of storage instead of 16GB. The second prize in this package is a replica Metal Gear Solid: Revengance sword. 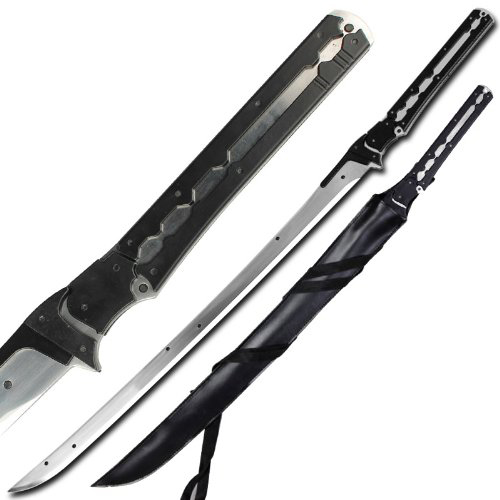 The specs for the sword are below:

As you can see, it’s actually a decent-sized sword. I’m actually considering buying one myself since they are on sale over on Amazon for $51.23 (In case you want to check it out). Usually they cost $200 basically. We are going to throw in a $50 Google Play gift card in the whole package as well, so you can start filling up that new Shield Android TV unit with games right away.

Now for the rules! This giveaway is open to anyone over the age of 16yrs old. You can earn as many entries as you want through the widget below, with a minimum of one entry needed. We will pick a winner on January 15th, 2016 at 12pm PST, so you have plenty of time to get your entries in. The winner for this giveaway will be selected at random and will be announced here on the site in this article. The selected winner will have 48hrs to respond to our email in order to claim their prize. If a winner doesn’t respond in time, we will select another random winner.