Our friends over at Kongregate, one of the biggest sites for playing high quality Flash games, released an app the other day called the Kongregate Arcade App. This was to give all us Android gamers access to over 300+ Flash games to play on our Android devices. Unfortunately, a few hours later it was pulled off the Android Market.

The application offered everyone who downloaded and installed it a slew of great features and of course, 300+ Flash games to play. It was also fully integrated into the Kongregate site meaning if you have an account there, you have all the features you would normally have via your browser available to use including earning points and badges. 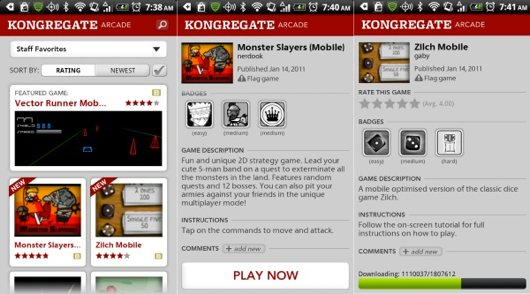 You’ll also receive 50 bonus points if you download and install the application onto your Android device right now. One problem though, it was pulled off the Android Market a few hours after launch. The reason? Originally it was said by Google that it was in violation of the Android Market Developer Distribution Agreement because the app itself was distributing other apps.

Kongregate has said they are working with Google to restore the app back onto the Android Market. In an official statement from the crew over at Kongregate, they explain the reason in a bit more detail:

“Yesterday we announced the Kongregate Arcade app for Android, and within hours it had a 4.61 rating and tens of thousands of downloads. Unfortunately, Google chose to remove it from the market, saying that it was illicitly installing applications. In truth, Kongregate Arcade just plays Flash games via the Android web browser and doesn’t install anything, though it does cache games for faster loading. The TOS limitation they reference for our takedown is so broad it would apply equally to content apps like Kindle, Slacker, and hundreds of others, and yet only our app has been removed. We had showed it to several people at Google who loved it, and we’re still hoping they will change their minds.” – Kongregate

Hopefully Google will change their minds about this and allow the application back onto the market or at least let Kongregate make any changes they need to in order to have it available on the Android Market. Until then, you can still download it from the Kongregate website or our download mirror, both links are located below.