I recently had the opportunity to jump from a Google Nexus One to a Samsung Vibrant(Galaxy S). The transition, which T-mobile makes extremely easy, was smooth and flawless. But as all things go in the computer/smartphone, there were a few less then stellar items that I need to note. But first lets give the differences between the two phones.

**The Nexus One is no longer offered by either carrier, but the phone can be purchased through third parties and VIA Google Developer program.

As you can see the major differences here are the CPU/GPU’s the display and memory. Does that really make a difference in performance though? Well read on and lets see how this all pans out in my 3 part review of the Samsung Vibrant. But first a quick and I mean quick overview of the phone.

Overview: As said earlier I had a smooth transition from my Nexus One to the Vibrant, but there were some things that show the failures in the third party tinkering. No I’m not going to get into the interface of the devices sans the fact that the Nexus One is a Google Android phone throughout with no extra stuff thrown in, and while some say it is bland, it just works and works well. The Vibrant with the Touchwiz 3.0 interface leaves a lot left to be desired, and has tons of short comings, but it didn’t take me long to get used to the interface so no real time loss there. But I will say this, when a company steps in and pushes there proprietary stuff on you they should think harder about the end user.

The Nexus One’s first boot up showed me an awesome little screen that let me either create a Google account or add my current. That was nice and made the phone feel more integrated with Google as one would expect from an Android phone. The Vibrant took me right to the desktop where I had to fiddle around with the settings to add all my google info. Was it a pain, yes… Was it a deal breaker, no… Now with the one thing that really annoyed me the most out of the way lets get to the sweetness of what the Vibrant means for the gaming community.

I must first say that the Vibrant is snappy, VERY snappy, but not everywhere. When moving around the system there are times of long hesitations that make you wonder if you hit the button. This is a known issue and can be fixed at the expense of half your apps memory, but at default this is an issue. And I also need to note that I have seen it happen in a few games. There are times in the game where the entire game stops for a moment then picks back up. I never experienced this on the Nexus One, sure there were slowdowns as with an system, but not full one sound and video stops. But as I already stated this has been fixed VIA the XDA community and doesn’t happen often enough to be in the way. 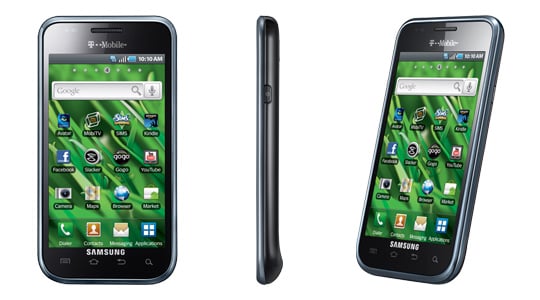 The screen so far has been very satisfying and bright, and I mean bright! At the lowest setting it is brighter than the Nexus Ones medium setting and most other phones max setting. The display is large enough that big fingers, like mine, can hit buttons and not hog the whole screen. Sure, slightly less than half and inch may not seem like much but hey that is the width of my pinkie finger alone.

The phone will be very well accepted by the gaming community for not just it’s power and bright screen, but the weight. This thing is super light and feels like a feather in your hand, which translates, for me at least, into less arm cramps(hey I’m old) while holding it in 50 different positions while playing games. Sure lighter weight may be a bad thing for some, but after playing a game on this phone for an hour I must say that it left me without cramps and without a luggy arm feeling. The thinness and shape of the phone are also very well done, and unlike the Nexus One I find myself hitting the hardware buttons at the bottom of the screen less often, to almost never. No more accidentally pausing the game or backing out to the desktop.

Sound is a big one for games as well and the speaker, whether it is due to the thinness of the phone or just speaker placement and size, is super loud. I find myself lowering the volume on the Vibrant and turning it up on the Nexus One, the difference is night and day. Besides it being loud it is also decently clear, I can hear characters talk and music and sound effects ring through, though some games do need to be toned down as some distortion occurs at max volume. The headphones that shipped with the phone sound good as well, but lets face it everyone has their favorite headset and that is not a part of the phones abilities.

So you may be thinking what is it that he can put into this to make it a three part series. Well lets see, there is the overall gaming feeling, the touchscreen input details, the speed of games, battery life, and lets not forget connectivity. Yep this phone will do 480p output to your TV VIA the 3.5mm headphone jack to your composite in(red, white, yellow). And soon there will be a MicroUSB to HDMI out cable, but it is still up in the air as to whether that will be true HD or just another 480p connection.

So stay tuned for more on Vibrant and it’s gaming abilities in the next few weeks as I plow through this phone thoroughly and test it on all fronts. And remember Droid Gamers is the only place to get all the goods for Android gaming!