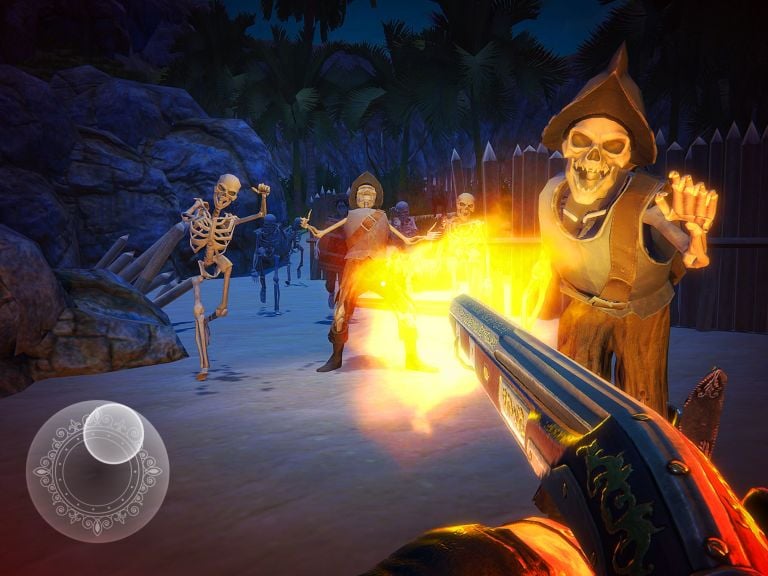 Getting marooned on a desert island must have been an occupational hazard for pirates. One bad squall, one unfortunate gunpowder incident, and bam – they’re shipwrecked and stranded in the middle of nowhere.

Deprived of your crew, your cutlass, your schooner, and even the trusty parrot you presumably owned when you were still on the high seas, you need to stay alive in an incredibly inhospitable environment.

At first, your only tool is the hook that you have instead of a hand – which is arguably more of a disability than an advantage. Armed with this hook and your wits you’ve got to keep yourself alive by, in the first instance, eating and drinking enough.

You can subsist for a while on the fruit that you find, but to stay alive long term you’ll need to feast on flesh. That means learning how to fish and hunt. You’ll need to learn some basic cooking skills, too, since eating raw meat will make you ill.

Thankfully, slaughtering animals creates useful byproducts, such as bones, which you can use for crafting all sorts of weapons, tools, and so on.

It’s all very practical, with an emphasis is on establishing responsible strategies for coping with real world obstacles.

And then the zombies show up. While you’re out hunting you can easily stumble upon the walking dead, and at night they’re joined by walking skeletons, adding a real sense of rising panic to the day/night cycle.

Last Pirate: Survival Island is loosely inspired by PC and console survival games like Rust and Sea of Thieves, and its console pedigree is clear to see in the pin-sharp, atmospheric, detailed 3D graphics and the immersive first-person perspective – a real novelty on mobile.

You can download Last Pirate: Survival Island for free right now on Google Play and the App Store.