NCSoft is responsible for some major MMORPGs such as Guild Wars, Aion, Lineage I and II, and the upcoming Guild Wars 2. While their Aion application so far is only for iOS devices we can expect to see it arrive for Android soon although there is no official confirmation regarding it. However, what is confirmed is that NCSoft is not only hiring someone, preference given to anyone with mobile development experience including Android, but also that they already have something planned for when Guild Wars 2 is released regarding Android. 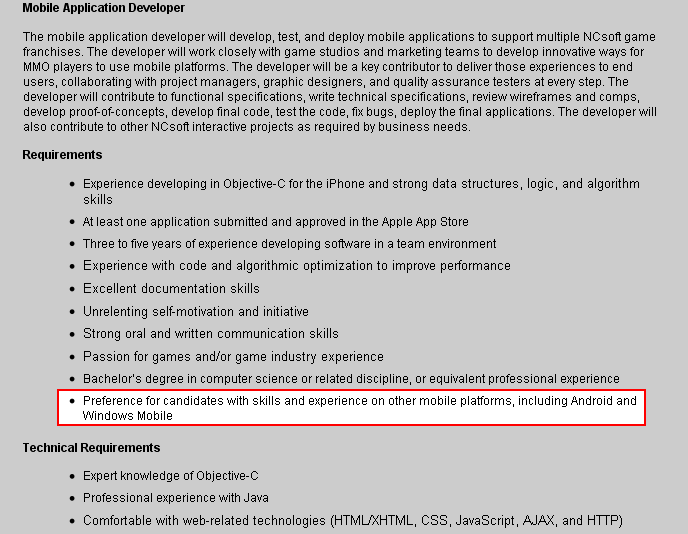 While we can only speculate right now as to what they do have planned for Guild Wars 2 and Android, a safe guess would be a similar companion application like the one for iOS and Aion. Some features of the upcoming Guild Wars 2 application for Android have been mentioned and include the following:

Not a whole lot yet has been given out aside from those couple of features but judging from the Aion application for iOS it should have a few more interactive options. Most of NCSoft’s MMORPGs are Freemium business model which means no subscription fee to play but you can buy in-game items using real money to help boost your gameplay. Other companies such as Blizzard are charging a fee (Armory for W.O.W is a monthly fee!) for their companion applications, don’t be surprised if NCSoft releases theirs for free.

Companion applications are great and helpful but major game developers of online games need to start looking bigger, especially with mobile hardware coming out for Android which consists of Tegra 2 chips and tablets, to start bringing actual playable game clients to the Android platform. Some already are, like Vendetta online, Rage although not an MMORPG, World of Dragons and Clockwork Runes (complete 3D MMORPG). We just need more major titles to jump on board.