Today we found news that NEC will be announcing their new dual-screen Android tablet at CES in just one month. That’s right, you read correctly. This will be a dual-screen tablet which could be huge for our gaming itch when it comes to the tablet market. This could get really fun and interesting with gaming!

While the dual-screen is not entirely new as the Nintendo DS already does something like this, the two screens for this tablet will work completely independent of one another. While one screen could have you surfing the web, the other screen could be playing a game. Some of you may already do this when it comes to a game like Angry Birds. On your device you are playing the game, while on your computer you are watching a video of the stage you are on to try and collect all the stars you can. Multitasking at its best! Remember how big dual-boxing had become on some games for the computer? This may attract some of those gamers to tablets. You could possibly play an MMORPG on both screens, with two different accounts. There are so many possibilities. 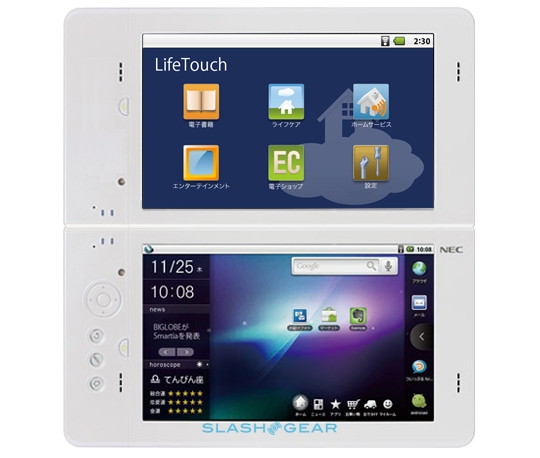 Mock-up of the dual-screen Android tablet via Slash Gear

While all we have for now are mock up screens we do know some of the networking capabilities, but none of the specs other than each screen being seven inches. Word is the device will be Bluetooth and 3g capable as well as WiFi capable. No matter where you go you will have options to get online. There is also no information out there about what version of Android the device will be running. We scoured the internet trying to discover any small bit of information we could that isn’t already out there but it seems NEC is being quite tight-lipped about this tablet and is patiently waiting to make a big splash at CES.

If you can not make it to the event you can be sure to find more news and updates from DroidGamers!